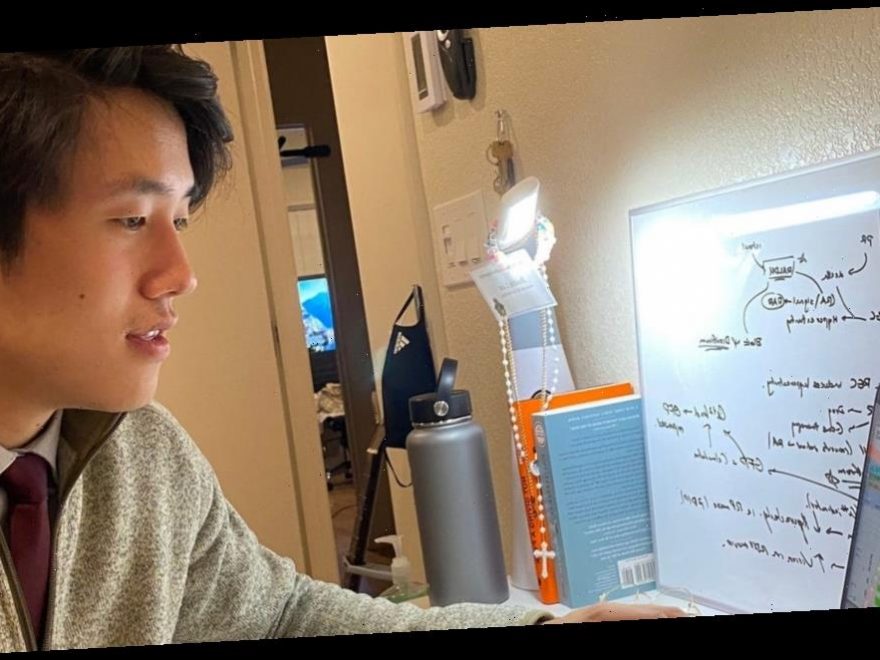 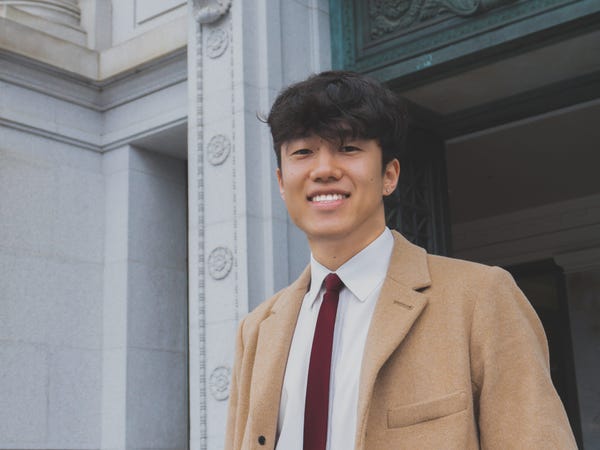 Originally from Boulder, Colorado, Justin Lee moved to the Bay Area four years ago to attend the University of California, Berkeley. When the COVID-19 outbreak swept into the US in March and Berkeley decided to move the remainder of the spring semester online, Lee moved home to Colorado. He told Business Insider that at the time, most Berkeley students thought leaving campus would be temporary.

"Going into summer, I think we hoped everything would be back to normal by the fall. But by mid-July we realized that fall was also probably going to be online. I think that's when a lot of people just decided to stay home and forget about coming back," Lee said.

When UC Berkeley made the call in July to keep fall classes online, Lee says he considered the possibility of withdrawing for the semester, as he said several of his international friends did, "because they don't feel like it's worth the tuition costs for an online education right now."

He decided, however, that as a senior, "as much as it sucks to start our senior year in an online format and as much as we want to cherish the undergraduate experience, we also just want to graduate and get it over with."

As a premed student especially, Lee felt it was the best decision just to finish up his undergraduate degree without delay to be able to move on to the next stage of his education.

Here's what Lee's first few weeks at UC Berkeley have been like during the pandemic.

Lee moved back to Berkeley in early August to settle in for the start of classes on August 26. 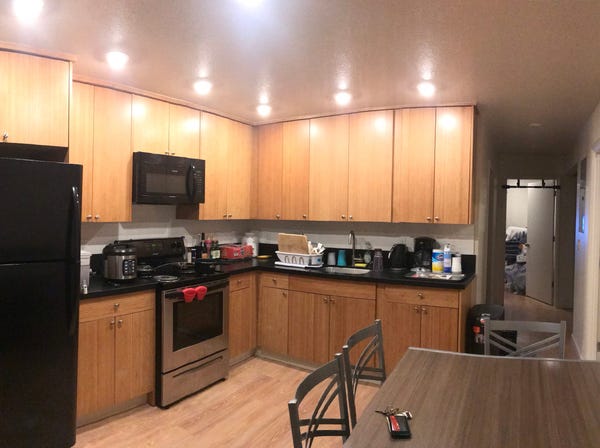 "I have five other housemates, but four out of the six decided not to come back up. It's just me and my other housemate who are living in our apartment right now, so it's very empty compared to what it normally would be," Lee said.

The apartment is a three-bedroom with two bathrooms, so Lee currently has his own room, and shares a bathroom, kitchen, and common area with one other roommate.

He says that he and his housemates all agreed to get tested for COVID-19 before moving into their apartment, which Lee did at the end of July before moving in early August. Lee and his current roommate are also getting tested on an ongoing basis, about every three weeks, at the Tang Center, UC Berkeley's student health services center. 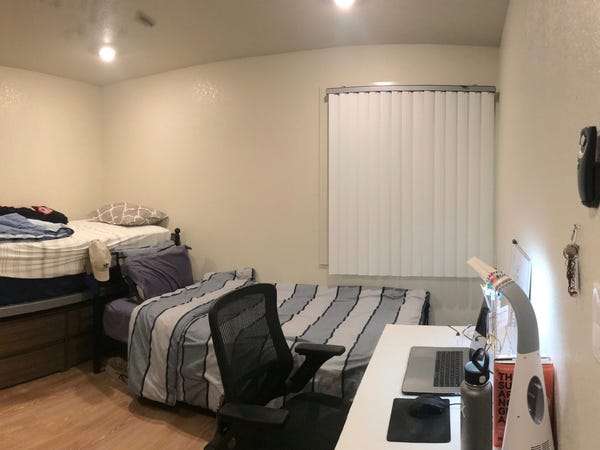 "I originally wasn't planning on coming back to Berkeley, because I could easily just stay home in Colorado and not have to pay extra rent for my housing. But having to do my honors thesis here kind of required me to come in person to my lab, so that I could run my own experiments. That was the main thing that brought me back, my research," Lee told Business Insider.

Lee says Berkeley's transition online was as best as it could be under the circumstances, but thinks virtual classes are "definitely not an optimal way of learning." 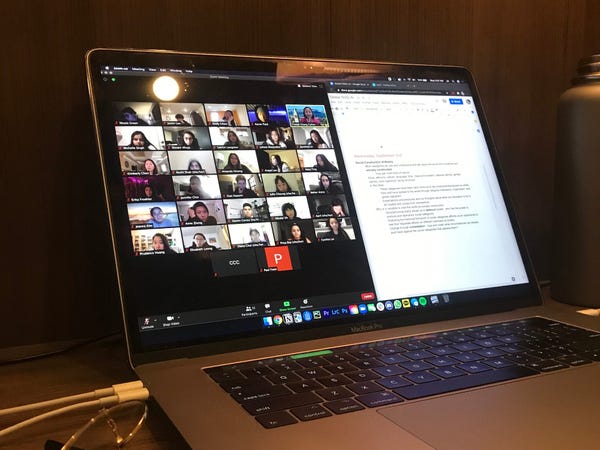 Three days a week, Lee is busy with online classes and meetings. He says he sits through almost seven hours of lectures on Wednesdays, his busiest day of classes, which he says can be draining, especially at the end of the day when he begins to lose focus.

He's also an instructor for an undergraduate-taught course, called a DeCal, on introduction to surgery. 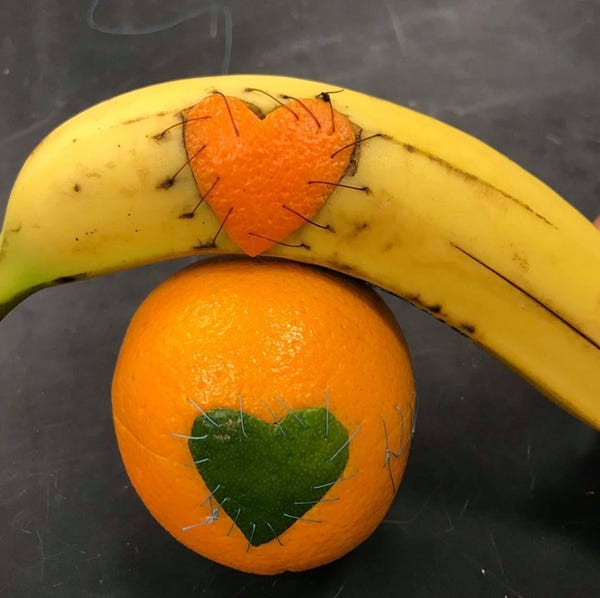 Lee told Business Insider that the course is normally very hands-on, teaching students how to suture bananas and other surgery-related practices. As the fall semester is online, Lee has been working since the summer with fellow undergraduate instructors to revamp the usual curriculum and contacting professional physicians to bring in as virtual guest speakers.

Lee says he plans out the course with fellow student instructors and teaching assiantants on regular Zoom meetings.

Lee doesn't have class on Tuesdays or Thursdays, and spends those days doing research for his two science labs. 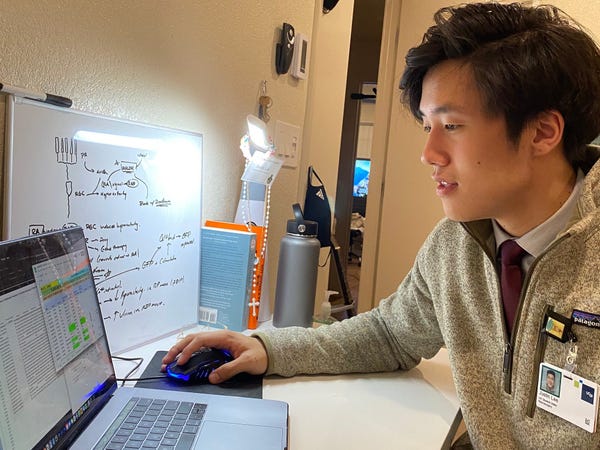 Lee works in two different research labs, one at UC Berkeley and one at the University of California, San Francisco. At UCSF, he works for a spine surgery laboratory doing clinical research and gets to learn from active surgeons and interact with patients.

He began working at the UCSF lab during his freshman year and would normally commute into San Francisco from East Bay, but as undergraduates aren't permitted to be in the lab in person for the duration of 2020, he's currently continuing his research virtually.

"The other interns and I are working on projects through a remote database, but we can't really see each other face to face or have research meetings with the surgeons. It's kind of sad not being able to go in person," Lee added.

He got special permission to conduct in-person research at the lab where he works on Berkeley's campus. 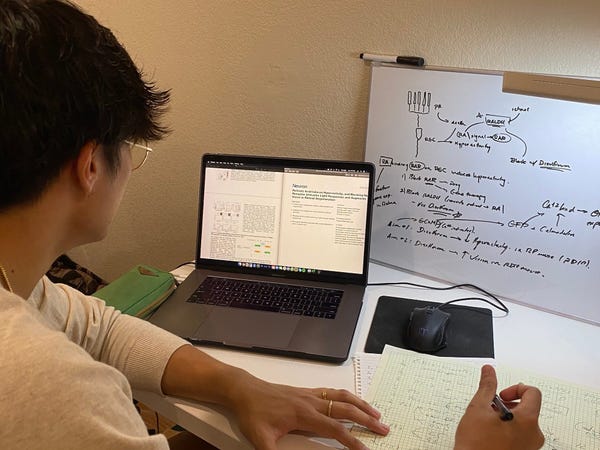 The labs at Berkeley, Lee says, are also not allowing any undergraduates to come in unless they're part of the undergraduate research apprentice program or conducting research for an honors thesis. Since he is doing both, he got special permission from the administration to be in the lab. It involved getting tested for COVID and also securing a form from Berkeley as well as the UC police department to carry with him at all times when he's on campus to show that he's allowed to be on there.

"Apart from my professor, Professor Kramer, there are a lot of post-doc and other graduate students, but at least for my lab, I'm the only undergraduate there at the moment."

In response to Insider's request for comment on this story, UC Berkeley said in an email that across campus, building and laboratory occupancy is limited to around 20-25% of normal use "to reduce the risk of COVID-19 transmission in the workplace."

The school confirmed that over the summer, primary faculty advisors were able to request special approval for undergraduate students, like Lee, to be "designated as an 'essential personnel'… to be included in the lab's daily personnel 'density budget.'"

According to the university, over 400 undergraduates have been approved to come to campus labs for research as of September 11.

Inside the lab building, social distancing restrictions are in place. 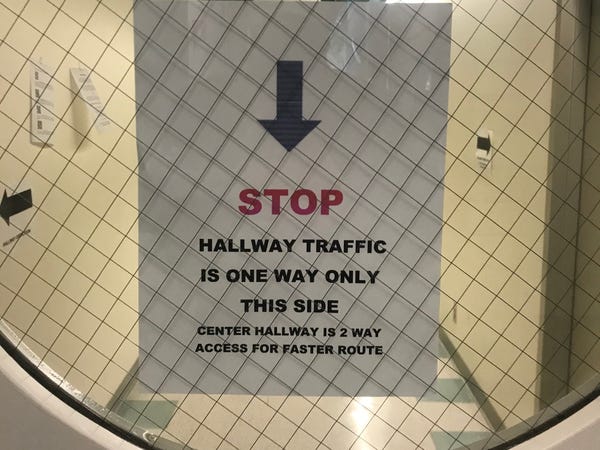 Lee has a key card that allows him special access to the lab buildings. Inside, he says there are directional hallways, "almost like one-way streets," to restrict the flow of traffic and prevent people from walking past each other. Elevators are also limited to one person at a time.

To receive lab access, Lee also had to do a mandatory online training on how to interact with other lab members during the pandemic. 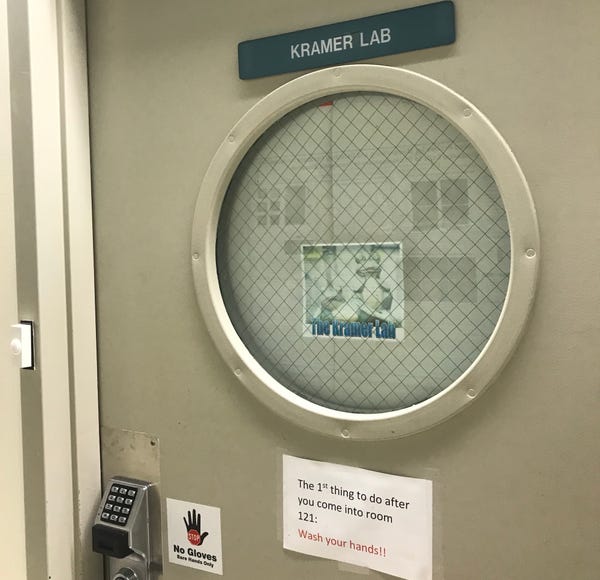 He says that he feels safe working in the lab as his fellow researchers are all "very safe and paranoid people." For the most part, Lee says they don't ever work in the same room as each other, and if the lab reaches max capacity, someone offers to go home. The maximum capacity inside the lab is four people and everyone gets their temperature checked and washes their hands right as they enter. They also get tested every three weeks, per Lee. 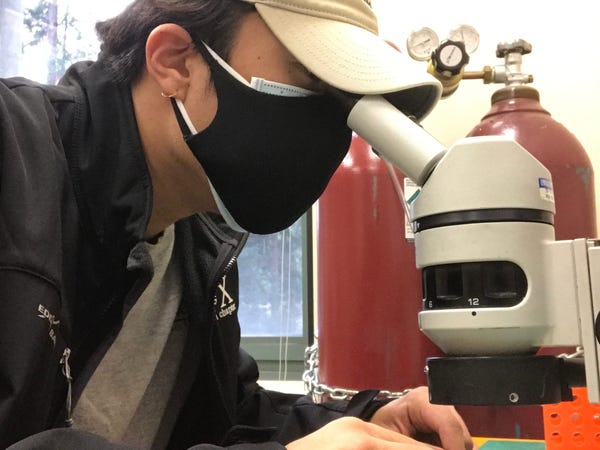 Lee is part of a team investigating retinal degeneration, aka progressive blindness, in the eye. At the Kramer lab on Berkeley's campus, they use mice models that already have vision impairments to see what causes eyes to degenerate faster. "We're looking for not only ways to stop it, but what are some causes of it," Lee said.

In the evenings after he's finished classes for the day, Lee says he'll often go back to the lab around 5 p.m. or 6 p.m., and stay until about 8 p.m.

Outside of the lab, Lee says the campus and city of Berkeley itself is widely deserted. 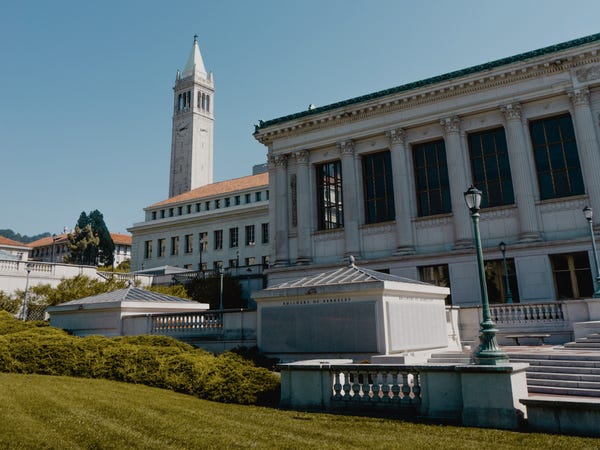 Walking around campus so far this fall, Lee says it feels lonely and like "kind of a ghost town." Berkeley is such a college town, he explained, that it feels very empty when there aren't many students around, similar to how it feels during winter or Thanksgiving break. 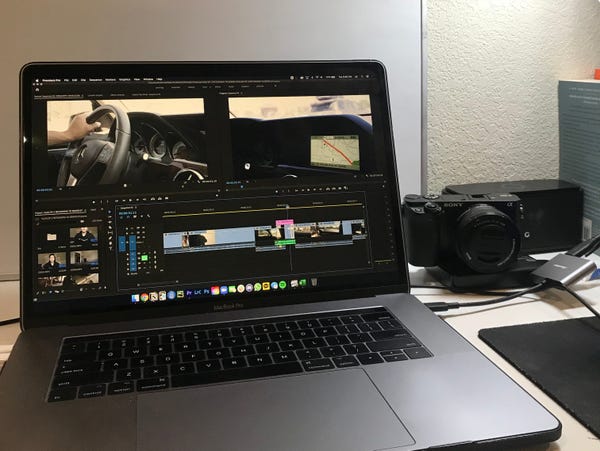 "When I have free time, I'm usually at my lab on campus. If not there, then I'll usually be taking photos with people or making YouTube videos, or playing guitar at home, just kind of relaxing," Lee said.

Lee got into photography at Berkeley and takes photos for different medical clubs, as well as professional headshots and graduation photos for his friends.

In high school, Lee was an avid basketball player, and in his first three years at Berkeley, he was also a member of a basketball practice squad for Berkeley's D1 women's basketball team.

After graduation, Lee plans to work as a research coordinator at UCSF before applying to medical school. 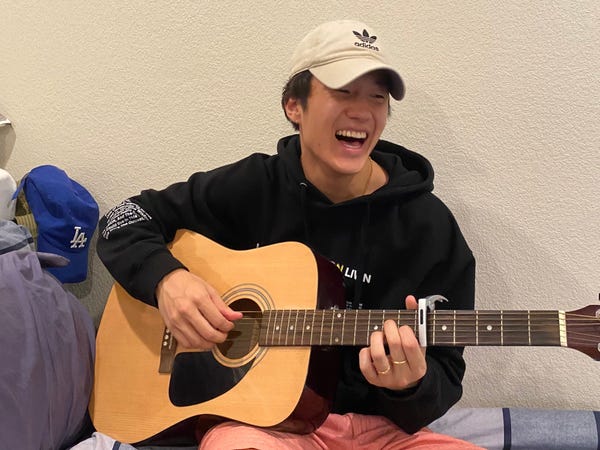 Post-graduation, Lee already has a job secured with the spinal lab at UCSF, as a research coordinator under neurosurgery. He plans on working there for a year or so while applying to medical school.

Lee says he's glad of his decision to return to UC Berkeley this semester and thinks the campus is safe and secure under the university's social distancing and testing policies. "I feel more protected going to the lab than I do just walking around on the streets."