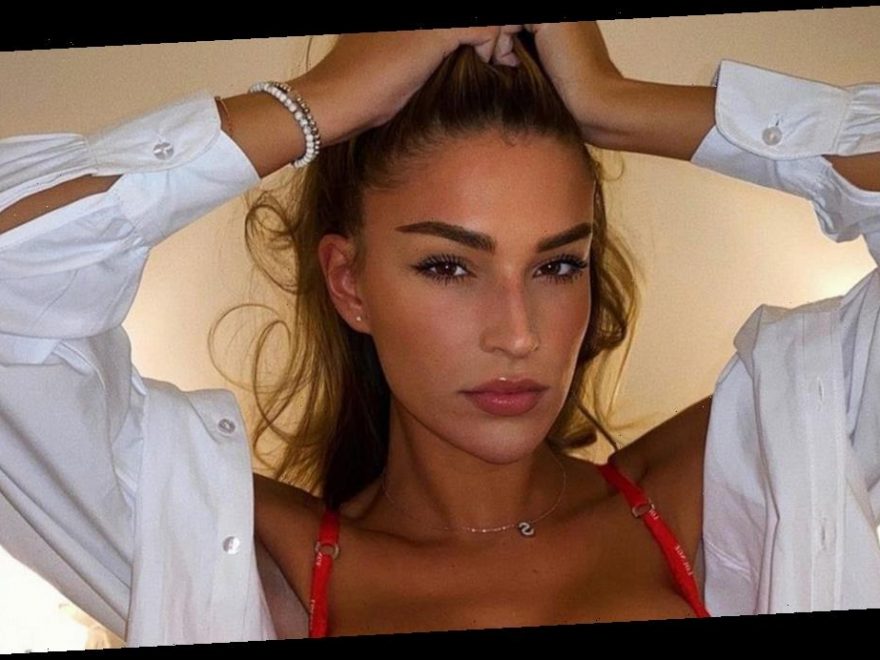 Made in Chelsea beauty Zara McDermott sent her followers into meltdown as she shared some sizzling lingerie snaps in a sultry Instagram post.

Zara, who turned 24 on Monday, showed off her jaw-dropping figure in the skimpy lace set after revealing she has lost a whopping three stone in a year.

As she smouldered for the camera in the lace bra and matching thong, she showed off her toned stomach and ample cleavage while relaxing back on her bed.

The plunging bra struggled to contain her assets as she leant back on her arms, leaving her fans very hot under the collar.

In one snap, she also turned away from the camera to flaunt her peachy derriere, which she has honed in the gym.

She finished the look off with a white shirt around her arms as she let her blonde locks fall behind her shoulders.

Zara captioned the snap: "When in doubt, wear red," and it didn't take long for the compliments to come pouring in for her eye-popping display.

Her red-hot snaps come after she reunited with her ex-boyfriend Sam Thompson, which aired on Made in Chelsea on Monday.

The pair split after Zara admitted to cheating on Sam at the start of their relationship, while she was taking part on X Factor: Celebrity.

In the emotional scenes, Sam took her to the park where they broke up and sat her down to talk about rekindling their romance.

He said: "Obviously this isn't a very nice park for us. It's got a lot of bad memories.

"We effectively broke up here, but I wanted to bring you back here to say what I've got to say. I've spoken to a lot of people about what's happened between you and me.

"My family, my closest friends, and I've done a lot of thinking within myself.

"I'm not ready to let you go. I just can't ignore how I feel. I would rather regret trying and it failing than not trying at all.

Zara broke down into tears as she told him: "I love you more than anything in the whole world."

She cemented their reunion as she shared some loved-up snaps of them together, as they celebrated her birthday in his garden earlier this week.