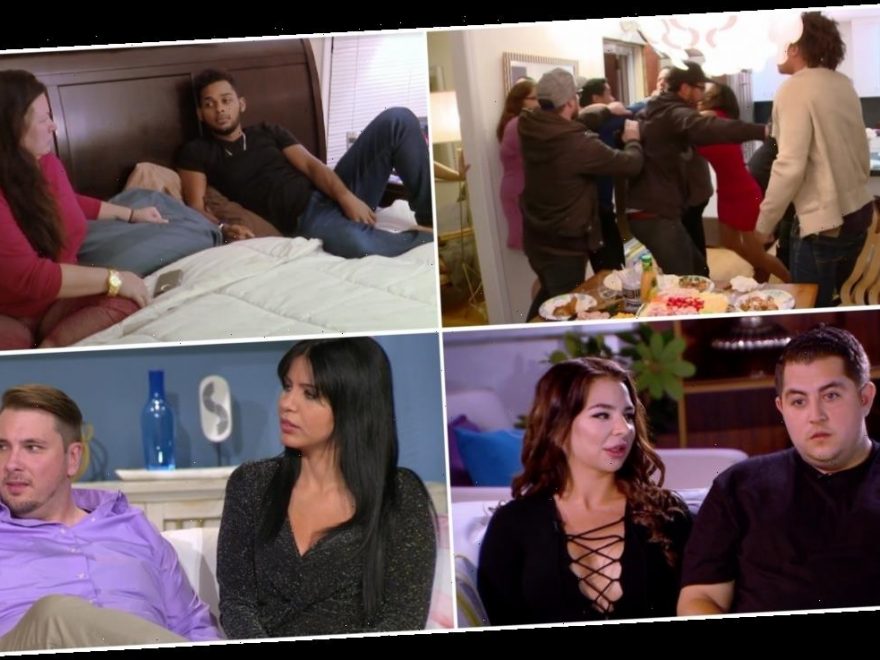 TLC struck gold when creating the 90 Day Fiance franchise. From high ratings to countless spin-offs, viewers can’t get enough of the international tension.

Hopeful couples are put under the stress of 90 Days to figure out if marriage is really the right step. From infidelities to extensive family conflict, it wouldn’t be a hit show without its major drama.

Here is our list of the 10 craziest moments in 90 Day Fiance history:

Paul getting mugged in Brazil 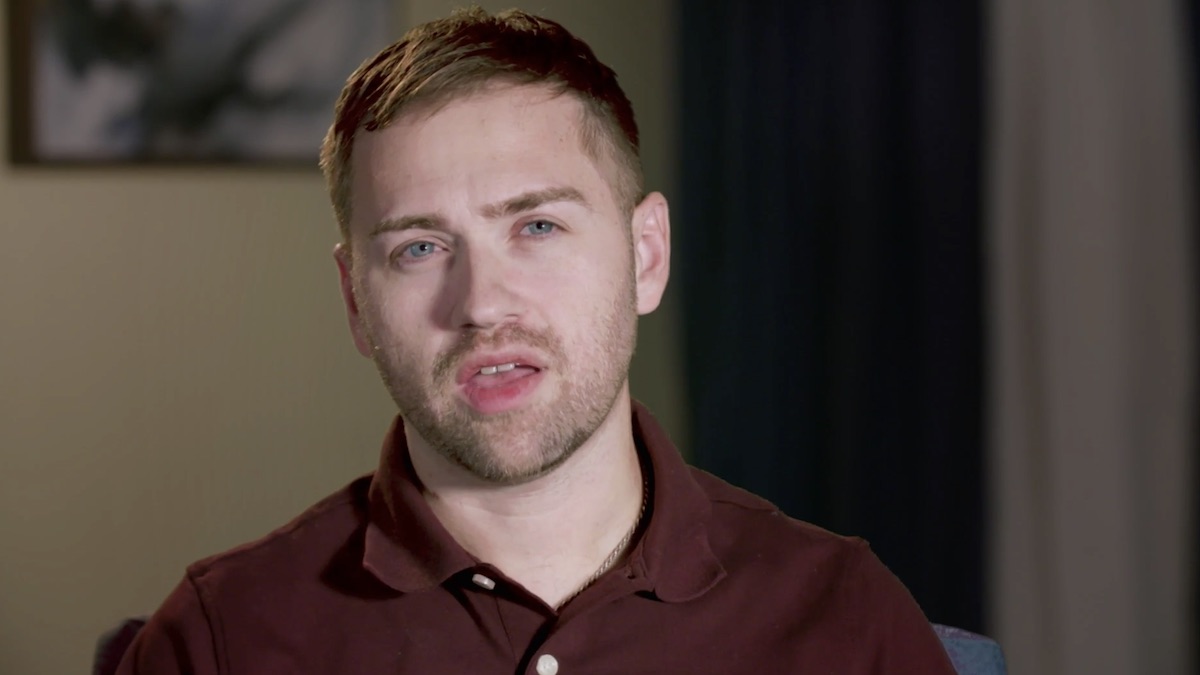 Viewers first met Paul Staehle and Karine Martin on 90 Day Fiance: Before the 90 Days. Who could forget Paul bringing five tubs of supplies when he first went to visit his Brazilian girlfriend Karine?

From the condom shields to the mosquitos nets, viewers became fans of the franchise watching Paul struggle with life in Brazil.

Things got violent on his first visit to Karine’s hometown of Tonantins. Just when he was going to come clean to Karine about his criminal past – viewers were shocked to see production scramble when Paul gets robbed by someone with a machete.

What makes the entire situation more difficult is not only are they talking about serious subjects, they are forced to have the entire conversation through a translator. 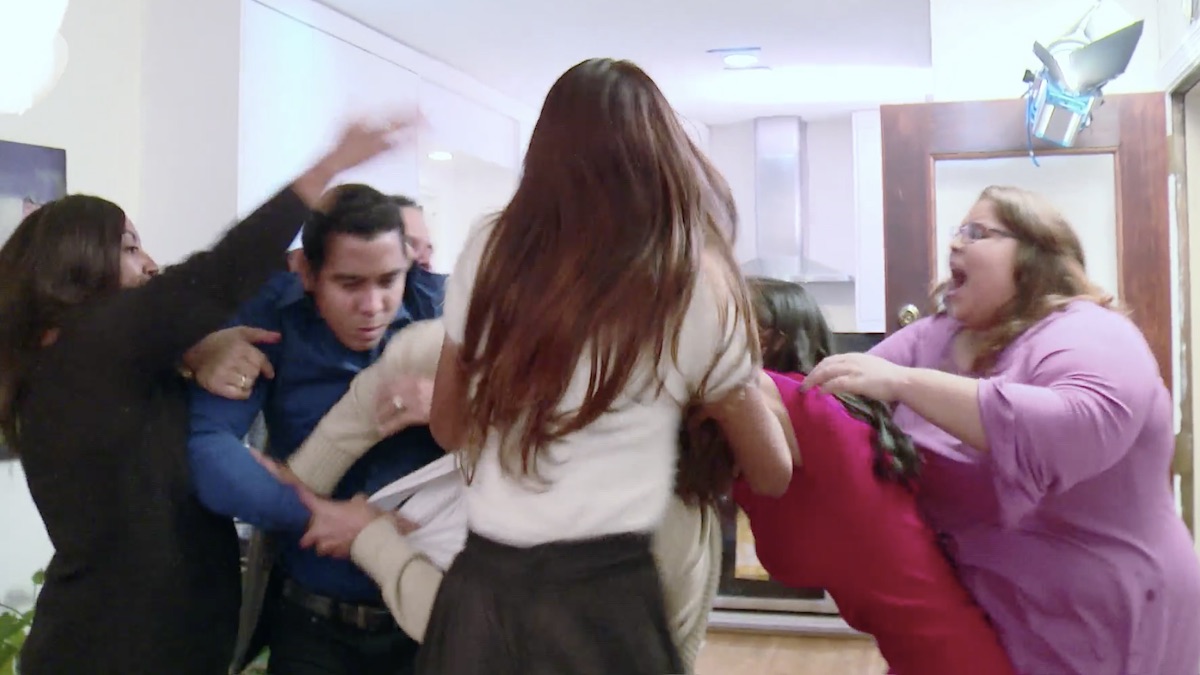 Chantel and Pedro were the first couple in 90 Day Fiance history to get their own spin-off, and there’s a reason why.

The Dominican and the beauty from Georgia not only had to make things work with each other but also between their crazy families.

While Pedro’s sister Nicole is in town, the entire family gets together to have dinner.

Although the dinner starts cordial, it quickly turns as sour as Chantel’s mother Karen asks Nicole why she and Chantel aren’t getting along. This immediately hits a soft spot for Pedro, as he hates when Chantel tells her family about the problems in their relationship.

He feels that her family already doesn’t like him or his sister, telling the problems of the relationship only further cements their dislike of the Dominican siblings.

This turns into a bickering fight between Nicole and Chantel, arguing about who is lying in the situation. While Pedro is trying to control the situation – he yells back at mother Karen causing Chantel’s younger brother River to lash out.

This causes Pedro to stand up, which instantly escalates the situation. River flings the ceiling light at Pedro which causes him to go across the table to get into a physical altercation with his wife’s younger brother. The situation is chaos as it ends with Pedro getting pulled off River and Chantel in tears.

Jenny finds out Sumit is married 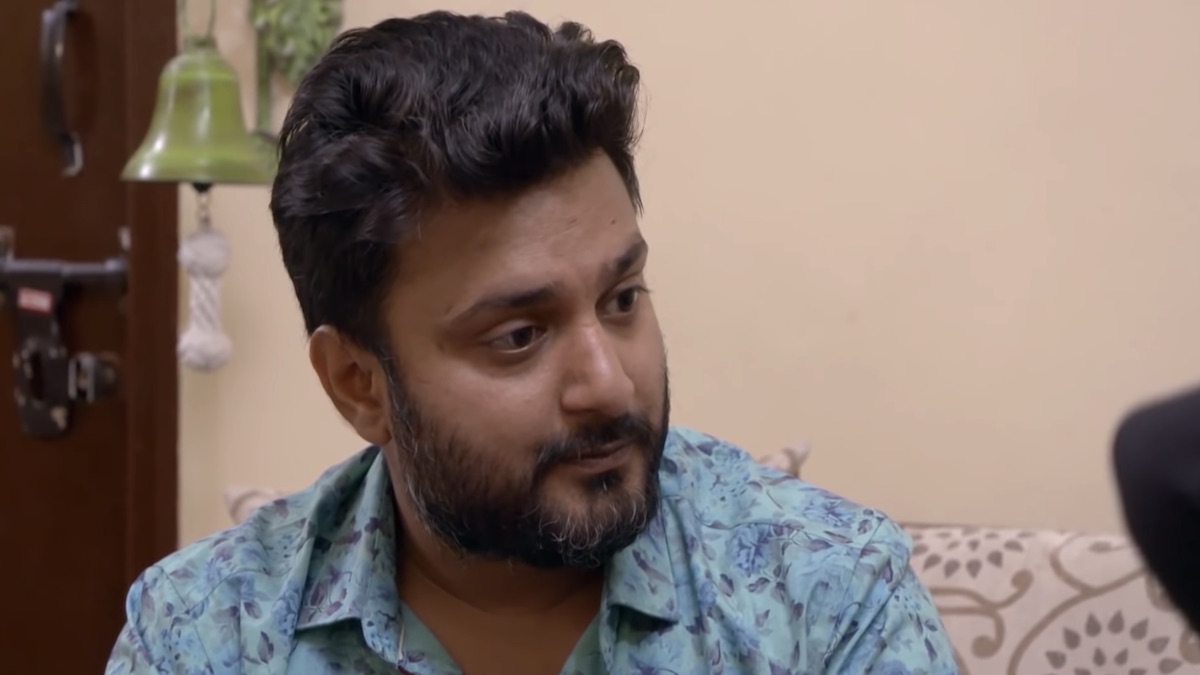 We first met Sumit and Jenny on the spin-off 90 Day Fiance: The Other Way.

When they first started talking online, Sumit told Jenny that his name was Michael Jones and sent her pictures of another man. Although he lied about who he was and what he looked liked – Jenny accepted him and chose to move to India to be with him.

She thought the hardest part would be getting his parents to like her,  much less the bomb that was dropped when she was in India.

What happened was worse than she could’ve ever imagined. Jenny gets a knock on her door and the person reveals themself as Sumit’s father-in-law.

He reveals that Sumit has been married for the last two years to his daughter.

Jenny and Sumit had been talking every single day for years. She was confused becasuse not once did he ever mention he was married. She was stunned upon hearing the news and didn’t know what to do.

It wasn’t long before the families of Sumit and his wife show up at the apartment Jenny and Sumit shared. They threatened both Jenny and Sumit with legal action for their indiscretions.

Jenny was left crying at the apartment, alone in India, as the families forcibly took Sumit with them.

Jay cheating on Ashley at the tattoo shop 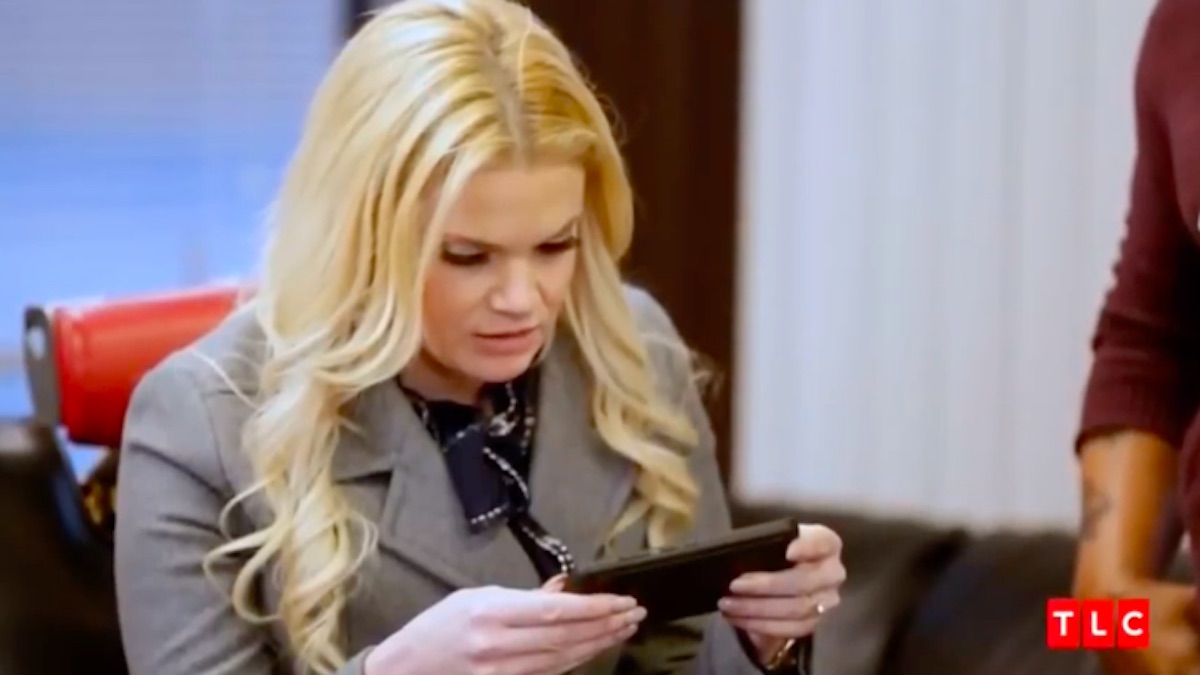 Everyone knew the marriage between Ashley Martson and 20-year-old Jay Smith wasn’t going to work. However – no one expected it to be this bad.

It wasn’t bad enough that he started cheating on his wife by hopping on dating apps just days after their wedding, but Ashley finds out some crazy things happened at his workplace.

Jay made some friends at a barbershop and they allowed him to continue to practice his tattooing inside their facility.

Apparently, Jay was tattooing a girl and it was her idea to stop halfway through the session and take a ‘bathroom’ break. The two entered the bathroom together ,where sexual sounds could be heard loudly inside the place of business.

Not only did the owners of the barbershop tell her the story but they had indisputable proof on tape.

Although she initially didn’t think Jay’s friends were going to tell her anything. But they were upset that Jay would disrespect their business. Plus one of them has a daughter and would want someone to tell her if she was in that situation.

Ashley was horrified and immediately threw him out of her home.

Anfisa calls Jorge’s sister a B**** 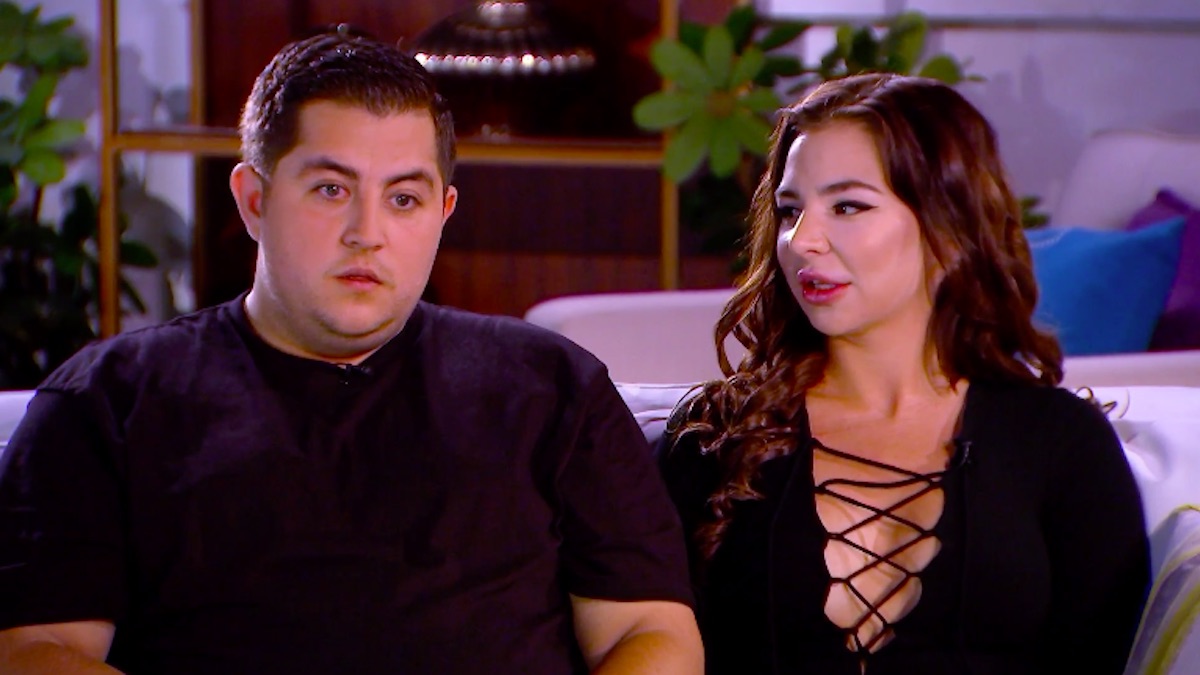 When you think 90 Day Fiance, one of the most iconic couples of the franchise is Jorge and Anfisa.

While Anfisa would let Jorge know that she was in the relationship for the expensive gifts, he didn’t care. Viewers felt bad for Jorge, as she would yell at him excessively and call him stupid.

Anfisa expected to come to the US and be financially taken care of – only to get here and realize Jorge doesn’t have as much money as he said he did.

From breaking multiple phones to keying the word ‘idiot’ on Jorge’s car, there was a reason why his sisters didn’t like her. Not only was she controlling but would only show affection toward Jorge if it resulted in a gift.

Although Jorge wouldn’t stand up to Anfisa, his sister Lourdes did. Jorge’s sister was the only person to say what viewers were thinking when she asked Anfisa directly if she was using her brother.

Jorge’s sister famously told her, “When you have money – that’s when she spreads her legs.”

At the season’s Tell All, when the clip of Lourdes is shown, Anfisa says, “You saw what that bi**** said [about me]?” Viewers were shocked that Anfisa hit a new low in disrespecting Jorge’s family.

Larissa vs. Fernanda at the Tell All 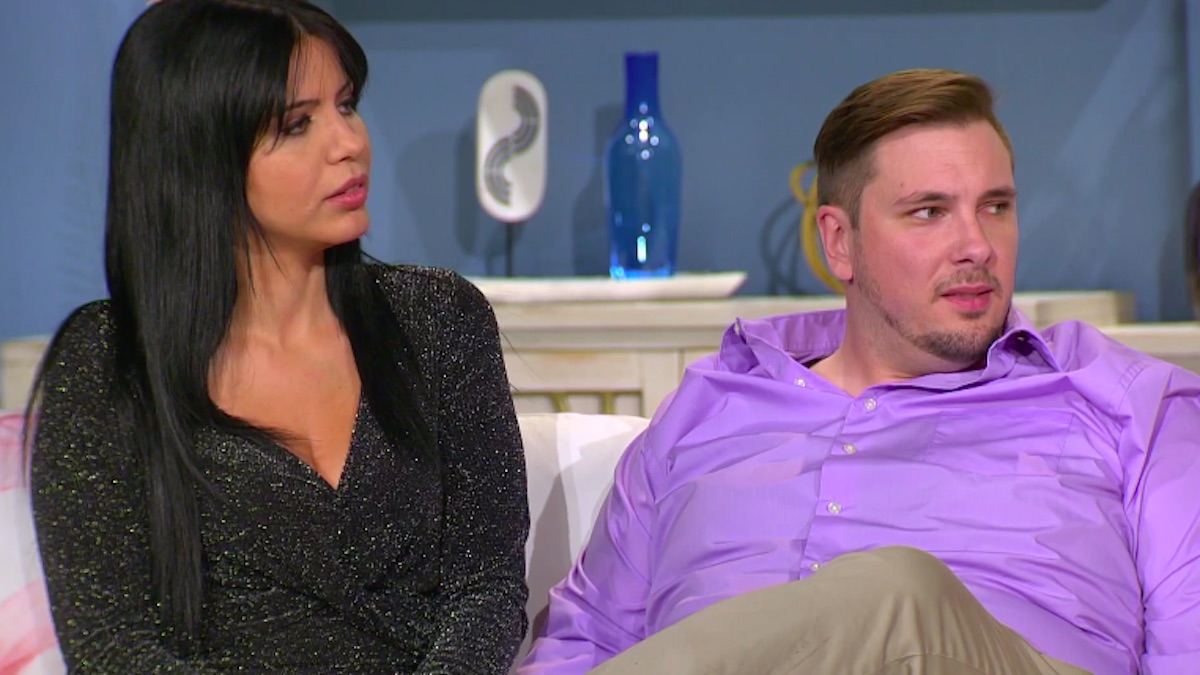 It’s safe to say Larissa Lima and Fernanda Flores don’t like each other. Season 6 had the two 90 Day Fiance wives going head to head.

Larissa famously arrived late to Tell All, to which Fernanda said she preferred the conversation without the Brazilian there.

The feud started off with an Instagram post, Larissa claims Fernanda posted a comment on her photo that her rubbed her the wrong way. When asked why Larissa has a problem with her, Fernanda simply said Larissa is. jealous of her.

To where Larissa tells Fernanda, “Show some respect you f**king brat.” She continues to call Fernanda just skin and bones and said that she should buy a butt.

Larissa continues to scream at Fernanda forcing the other castmembers to intervene.

Leida kicking her step-daughter out of her room 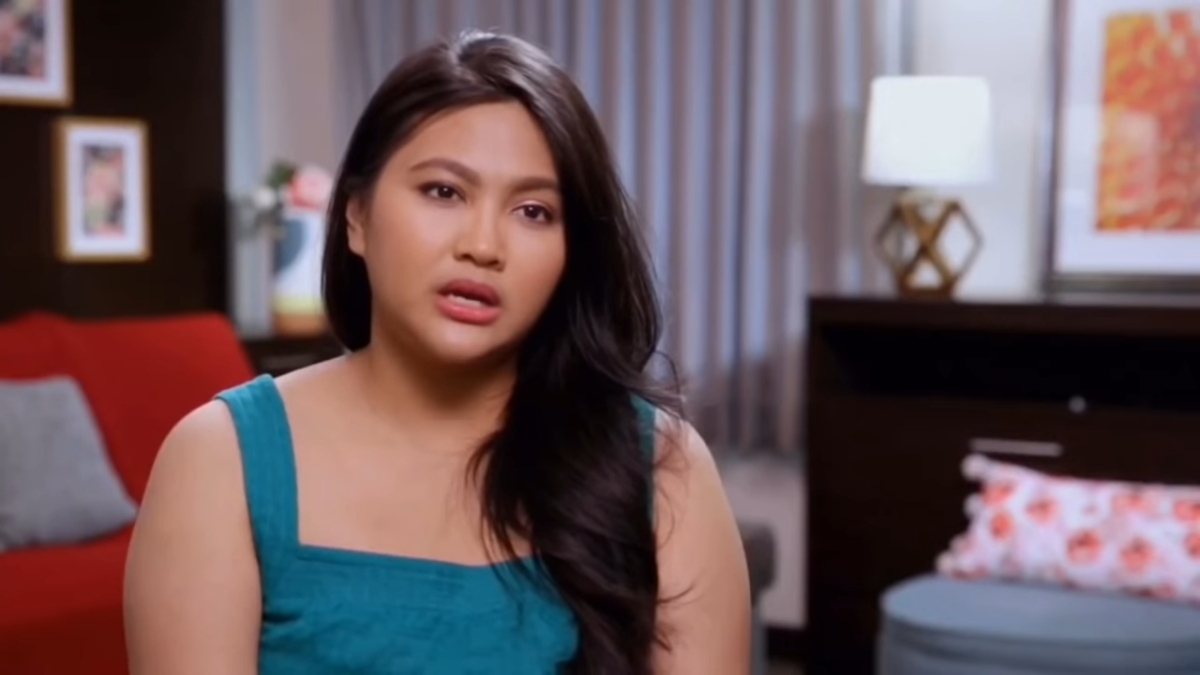 Leida Margaretha left her lavish lifestyle filled with butlers and maids in Indonesia to live in a tiny, dirty apartment in Wisconsin with her new husband. The doctor was giving up everything and wasn’t letting her fiance Eric Rosenbrook forget her sacrifice.

Leida also disagreed with Eric paying any type of child support for his other children. She made sure he knew that she felt his children were a burden.

If it was up to her, he wouldn’t support anyone but her and her young son.

In an effort to prove his loyalty – she forced Eric to throw his young daughter Tasha out to make space for her son. Tasha had to rely on the help of strangers to find somewhere to live.

The conflict between Leida and Tasha has only escalated as she went as filing a restraining order against her stepdaughter though Leida claims that the two are in a better place now. 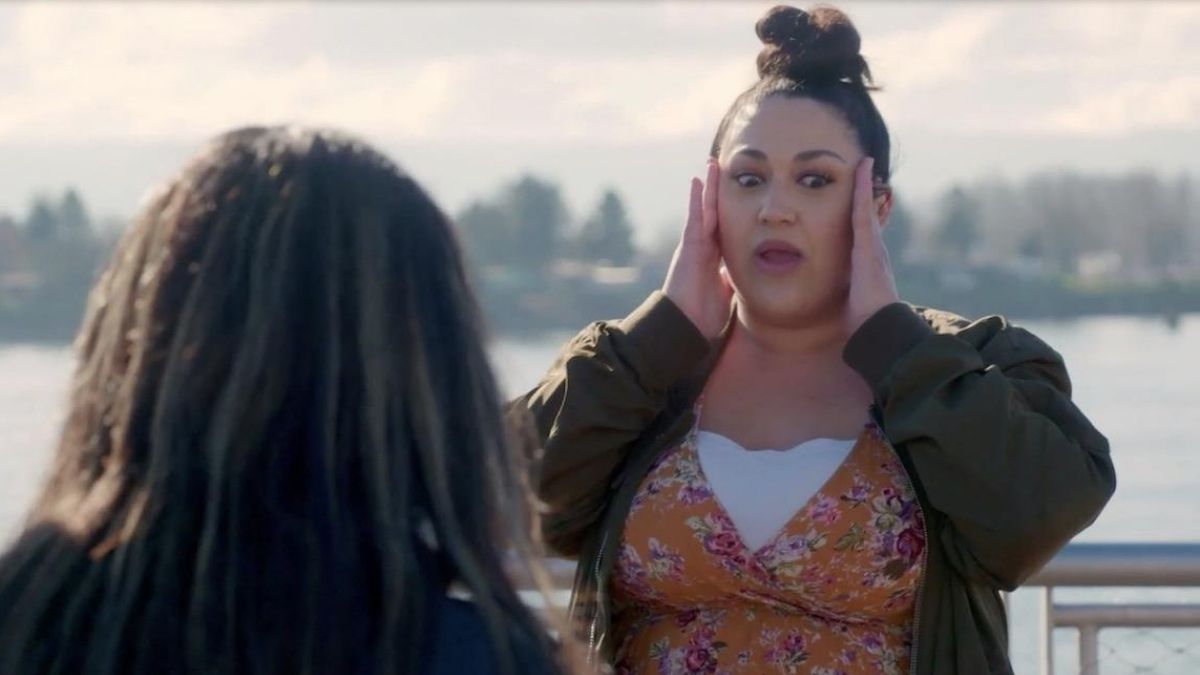 90 Day Fiance fans know that Kalani deals with a lot when it comes to her relationship with Asuelu. Not only does she have two young children, but Asuelu has his moods to where she feels like she’s dealing with three sons instead of just two.

With Asuelu working part-time, the couple doesn’t have much money to spare. This doesn’t stop Asuelu’s mother from demanding a ‘gift’ of over $1,000. She goes as far as saying the couple should divorce if Asuelu isn’t able to assist his family in the way she wants.

When visiting Asuelu’s family in Washington, his mother continues to press Asuelu for their ‘gift.’

Kalani tried to get Asuelu’s family to comprehend that they need that money for their children. Instead of being understanding about their financial situations, fans were shocked when Asuelu’s mom straight up says, “I don’t care about the kids.”

Asuelu’s sister Tammy goes as far as saying since Kalani is older – she controls him. Tensions escalated and Tammy said she wanted to beat Kalani up.

Although most viewers wanted Kalani to shut Tammy up, she handled it with grace and walked away. 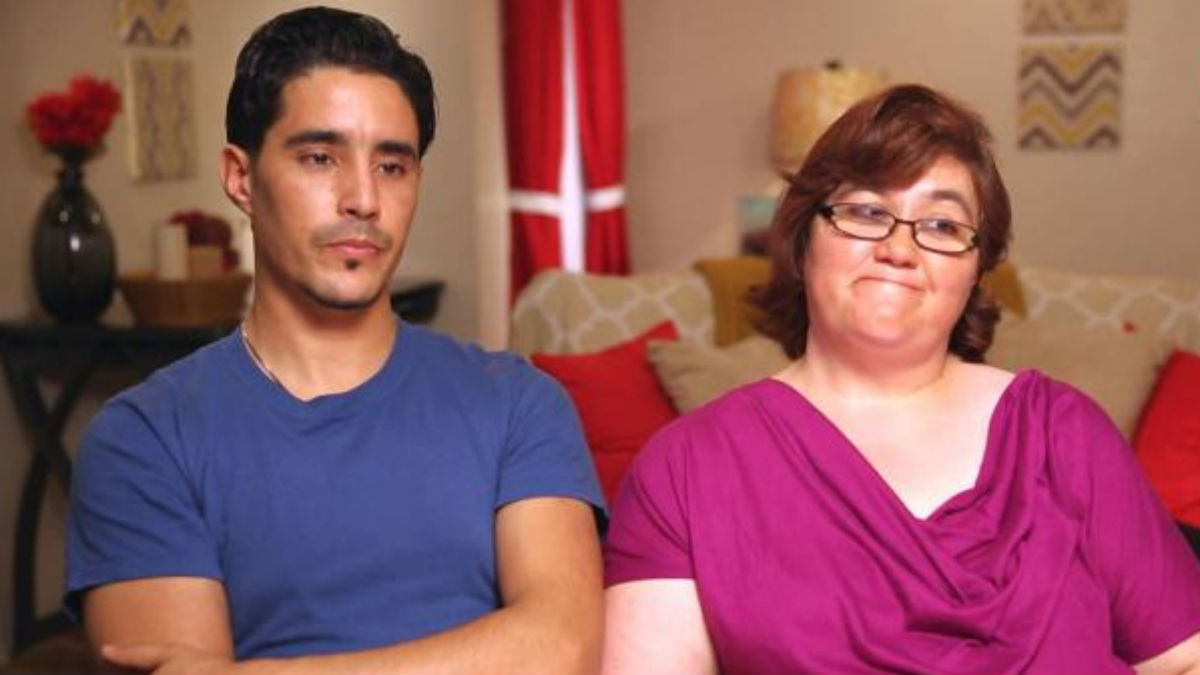 This couple had one of the messiest breakups in 90 Day Fiance history. Mohamed Jbali left his home in Tunis, to live in Sandusky, Ohio, with his fiance Danielle Mullins and her four kids.

The relationship quickly went sour when he realized that she lied about her finances and was in huge debt. The two still wed with him famously not kissing her on their wedding day.

Within months of getting his green card, he left Danielle to live with a female friend in Miami.

Then, Danielle showed up in Miami to confront Mohamed with a binder filled with clippings of text messages and conversations with other women.

Viewers were shocked when Mohamed admitted on the Tell All that Danielle lacked proper hygiene and had a certain odor that he couldn’t get past.

Although she guaranteed that she was going to have Mohamed deported, the two eventually developed a friendship and he’s working as a truck driver in the United States. 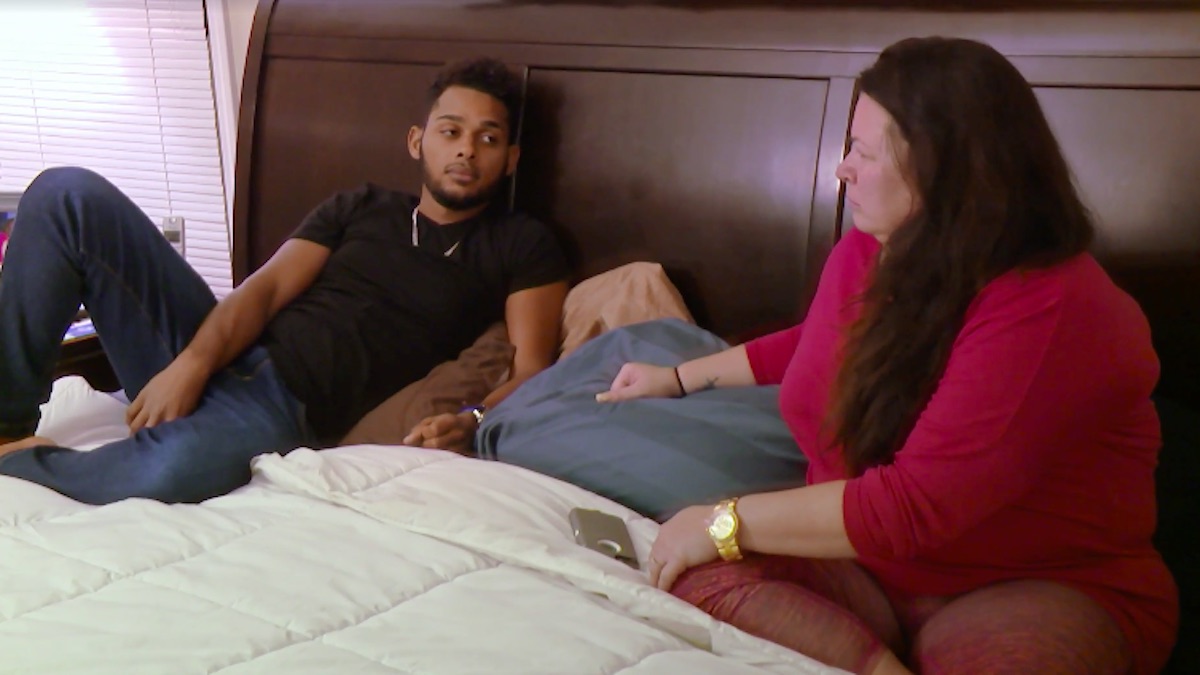 Molly Hopkins and Luis Mendez are another couple representing Georgia and the Dominican Republic. Luis may have liked the version of Molly on vacation but didn’t like the family that came with her.

They constantly argued about her kids and he wasn’t interested in becoming a father figure.

While arguing about her kids – out of nowhere, Luis begins to question why there isn’t one bible in the house. He claims she has a lot of Buddhas in her home but nothing about God.

He goes on to accuse her of ‘brujeria,’ saying that she does witchcraft.

Some viewers are convinced Luis blew this out of proportion just to find a way out of the marriage.

Molly ultimately felt like the man she fell in love with isn’t the man that’s in her house.

It was no surprise when it was found out he remarried a short time later.