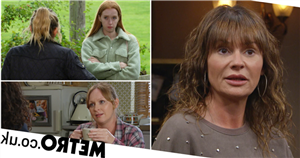 Emmerdale is lining up more shocks and surprises next week, with not one but two huge secrets set to be exposed, and you can sneak a peek at the drama above.

Chloe Harris (Jessie Elland) is convinced that Priya Kotecha (Fiona Wade) is the woman who Al Chapman (Michael Wildman) was secretly seeing, but Priya denies the accusations, proving that she was not involved in the scandal.

Chloe, however, soon puts two and two together and believes that she has REALLY uncovered the identity of the other woman, heading over to the Woolpack to have it out with her.

Is Chas Dingle (Lucy Pargeter) set to be caught at last as a showdown ensues?

That remains to be seen, but the affair isn’t the only secret in risk of exposure, as Charity (Emma Atkins) finds out Chloe is pregnant, and Mackenzie Boyd (Lawrence Robb) has to force himself to keep calm when he makes the realisation for himself.

Chloe assures him that Charity won’t find out about the secret from her or Kerry Wyatt (Laura Norton), but Mack steadies himself, as he asks Charity to take a seat.

Is he going to confess all?

You’ll just have to tune in to find out, because we’re keeping tight-lipped on the outcome of both secrets.