90 Day Fiancé star Anfisa Nava (formerly Anfisa Arkhipchenko) has had quite a bit of success in her career since splitting from Jorge Nava. While Jorge was incarcerated for two years due to marijuana-related charges, Anfisa pursued her college education, became a certified personal trainer and social media influencer, started a career in fitness modeling and bikini bodybuilding, and launched her own fitness app.

But one area in which Anfisa hasn’t always been lucky is her love life. After being released from prison, Jorge moved on with a new girlfriend, whom he referred to as the “love of his life” on social media. Anfisa dated a new man, Leo Assaf, for a time as well. But things fell apart in the summer of 2020, with the Russia-born 90 Day Fiancé star accusing Assaf of infidelity.

Recently, however, some of Anfisa’s Instagram stories hinted that she might be getting back on the horse when it comes to dating.

While Jorge was incarcerated in a federal prison in Arizona, his relationship status with Anfisa was initially unclear. But 90 Day Fiancé fans began to suspect that the couple was estranged when Anfisa dressed up for a Valentine’s Day dinner date with Assaf, a club manager.

Eventually, Jorge and Anfisa went public with their breakup – and Anfisa and her new man went “social media official” with their relationship. They seemed head over heels for each other at first, trading compliments and pet names online. But in June 2020, that all changed when Anfisa alleged that her new boyfriend had cheated on her (or, at least, tried to).

“This guy just doesn’t know what he wants,” the former 90 Day Fiancé star told fans on Instagram at the time. “I had girls texting me, ‘your man is in my DMs,’ all the time. The only reason he didn’t physically cheat is because the girl he went out with rejected him. Now he’s trying to throw shade at me.”

After claiming that Assaf wasn’t faithful to her, Anfisa went on to argue that he’d also tried to use her for fame. She also revealed that she’d kept her dating life fairly low-profile since her split from Jorge.

“He sure has been enjoying the attention he got from being with me,” the 90 Day Fiancé star told fans. “The most frustrating thing is that I tried to be a bigger person and keep my personal matters private during my last two breakups but these guys are just something else.”

Throwing shade at both Jorge and her more recent exes, Anfisa added frustratedly, “Are all men trash or have I just been lucky to find ‘the best’ specimen?”

By the looks of Instagram, however, Anfisa’s luck might have begun to shift in the love department.

On October 18, the 90 Day Fiancé star shared a few clues on her Instagram stories that pointed toward a possible new relationship. In one story, she showed off a photo of a huge bouquet of roses and baby’s breath, with a sweet note tucked inside to boot.

“Love coming home to this,” Anfisa gushed in the caption, along with a series of heart and kiss emojis. She added tellingly, “A man who knows how to treat a woman.”

In a second Instagram story, the personal trainer took a mirror selfie at the gym, captioning it “late night workout.” She added another revealing hint – “missing my swolmate” – that suggested once again that she might be in a relationship.

While Jorge’s ex-wife didn’t share any specific details about her mystery man or confirm a relationship, it certainly seems she might have someone new in her life. 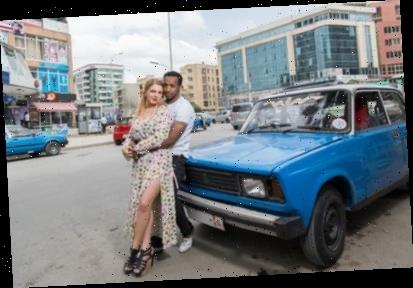 '90 Day Fiancé: Which Couples Got Engaged and Which Called It Quits?

‘All Rise’: Anne Heche To Recur On Season 2 Of CBS Legal Drama

'Below Deck': Only 2 Cast Members Were Kicked off the Boat Before They Were Fired
Entertainment