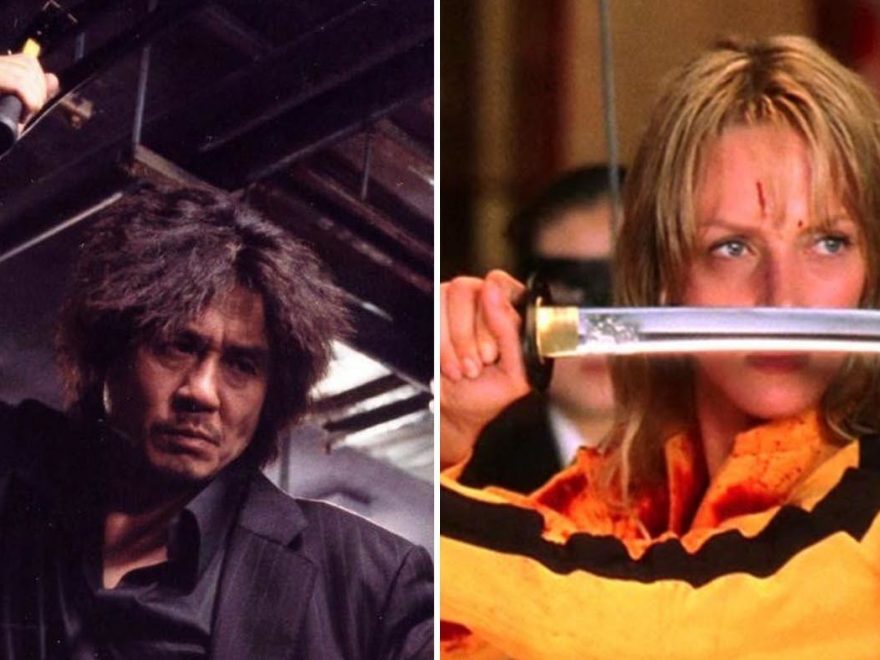 Hi, I’m Allie…and I just REALLY love movies, okay? Like, I’d marry movies if that were a legal thing to do! Even the bad ones!

I have so much student loan debt to prove this to you!

I recently took it upon myself to humbly rank what I believe are the best horror movie jump scares of all time and — while I was writing that post — I thought to myself, “What’s another oddly specific thing that I care far too deeply about? Oh, I know, really well-choreographed fight scenes!”

Now, this list will be sticking SOLELY to live-action movies released in the 21st century — so between 2001 and 2019 — and is, of course, just my opinion…but I really, really like these ones!

So strap in, badasses — here we go:

Why U Mad: A brutal mugging results in the murder of Grey Trace’s wife and leaves him paralyzed from the neck down. All seems lost until Grey is offered a miracle cure in the form of a fancy intelligence implant named “STEM.” Grey believes that STEM can help him find his wife’s murderer, but STEM has other, gorier plans.

Why I’ll Fight For It: Upgrade was the single most underrated movie of 2018 and YOU. CAN. QUOTE. ME. ON. THAT. Logan Marshall-Green’s acting was hilarious in this scene and the shot choices made during this sequence were, like, really rad?

12.Anchorman: The Legend of Ron Burgundy (2004) — The Chanel 4 News Team Vs. Every Other Local News Team

Why U Mad: All the local news room anchors take out their aggression on each other, but no touching of the face or hair…AND THAT’S IT.

Why I’ll Fight For It: Look, I don’t know. It’s dumb as all heck, but it’s also hilarious and I love it. Just let me get away with this one, okay? Thanks.

Why U Mad: It’s essentially a heist movie that takes place completely in some rich guy’s dreams. It’s absolutely WILD from start to finish. No matter how I explain this to you, it will do it no justice.

Why I’ll Fight For It: While the hand-to-hand combat in this scene is super simple, it’s hard to deny that this fight sequence is the most iconic moment in the whole film. From the stunning practical effects (they built a hallway that ACTUALLY turned in circles, that’s not CGI) to Hans Zimmer’s SLAPPING soundtrack, it’s just a really cool use of space and overall concept.

Why U Mad: After being challanged for the throne by the cousin he never knew he had, T’Challa is forced (for a second time) to participate in the ancient tradition of fighting to the death for the crown. Also, this involves two very handsome, strong, soaking wet men. Truly, praise be.

Why I’ll Fight For It: Oh. Y’all. Wanna. Talk. About. STAKES. THOUGH??? While all of the Marvel Studios films have a lot of great, GIGANTIC fight scenes to choose from, I always feel like their smallest ones are the most effective. Plus (spoilers), this is the first time that we see our sweet, brilliant T’Challa truly fail, and it’s genuinely heartbreaking to watch, which only makes us root for him more.

Why U Mad: This movie is literally about a man who will do anything to protect Thai elephants, and if you can’t get behind that, then I don’t know how else to sell this movie to you.

Why I’ll Fight For It: Your girl here loves a one-take action sequence, and this is one of the best examples of just how great a one-take can be. Also, Tony Jaa is an amazing action performer — so check out his stunts!

Why U Mad: She is NO man…darn it, wrong movie. Still, you get it.

Why I’ll Fight For It: Hello, I straight-up cried in theaters during this scene. It’s beautiful. Her theme music is still my ringtone, and this movie came out, like, two years ago. That’s all, I love it.

Why U Mad: There’s a super-powerful ring and, like, everyone wants it. No seriously, EVERYONE. It’s like…a perfectly fine ring, I guess. I prefer silver, but okay.

Why I’ll Fight For It: For a scene in a FANTASY film, this one just feels so REAL. By this point in the story, our beloved fellowship has broken up, and you’ve just watched poor Boromir get shot in the chest like 67 times, so our crown-less king is filled with steaming rage. ARAGORN. BEHEADS. LURTZ. IN. A. PG-13. MOVIE. It’s incredible. 11/10.

Why U Mad: A blood bag manages to escape the clutches of a sad boy and attempts to commandeer a vehicle from the single baddest woman on this Earth or any other, not quite realizing what he’s gotten himself into.

Why I’ll Fight For It: A fight scene is ALWAYS more compelling if you are rooting for people on both sides of it. This sequence is dynamic as all heck and filled to the brim with tension, especially since Max and Furiosa feel evenly matched up until the very last millisecond.

Why U Mad: A crime boss is hold-up tight in a multi-storied apartment building, where he’s surrounded by his evil buddies, but — as the title might suggest— they are about to be raided by a S.W.A.T. team of god-tier martial arts badasses.

Why I’ll Fight For It: Would you just look at this .gif?! That is just a few SECONDS from this scene. This is the type of fight sequence that feels more like you’re watching a dance than a bunch of people crackin’ skulls and whatnot.

Why U Mad: People are liars and you should trust no one — even if you’re a super-strong human. Also, don’t use elevators…ever.

Why I’ll Fight For It: That’s right, I personally think that this is the best fight sequence in any Marvel Studios movie (and yes, I am very much including all of the Avengers movies). The tight space of the elevator and the ridiculous number of large, buff dudes involved creates a “Hey, no thanks”-type of claustrophobia. Also, Chris Evans in handcuffs is a CONCEPT, am I right???

Why U Mad: Hell hath no fury like a pregnant woman who survives being shot in the head by her jealous ex-lover/ex-boss on her wedding day. That’s how that saying goes, right? Revenge! Nancy Sinatra! Yellow tracksuits! This movie! Has everything!

Why I’ll Fight For It: First things first, I firmly believe that Kill Bill: Vol. I is better than Vol. II and I will not apologize for that. This scene easily has the highest kill count on our list here (she straight-up massacres 88 people…90 if you want to include Gogo from the previous scene and O-Ren from the scene following). I do have to dock some points though, since this whole sequence really made me believe I could pull off the color yellow, which was the cruelest trick of all.

Why U Mad: After a mob boss’ son kills the precious puppy his wife gifted to him right before she died, an assassin is forced out of retirement to avenge his sweet fur baby. Relatable. Content. For. Pet. Owners.

Why I’ll Fight For It: I maintain that this franchise will go down as THE best action series of all time (don’t @ me, Mission Impossible). Both the editing and sound design in this sequence are absolutely stellar, and the stunts are performed within an inch of perfection. Hats off to Keanu Reeves — who has noted that he does “90%” of his own stunts in this franchise.

Why U Mad: When he is abducted and imprisoned in a single room for 15 years, Dae-su is mysteriously released and sent on a cat-and-mouse chase to find out not only WHO imprisoned him, but WHY they did so. Spoilers: It’s an absolute RIDE, y’all.

Why It’s THE BEST, FIGHT ME: Look, I’ll admit it — I’m a touch biased, since this also happens to be one of my favorite films of all time. Still, it’s not an exaggeration when I say that — in my humble opinion — this scene will NEVER be defeated. I will die on this hill (or should I say, in this hallway).

Cool, so I think we’re all in agreement that I’m right about all of these…Just kidding, I’d love to hear which ones I missed! Share YOUR favorite fight scene(s) of the 21st century in the comments below and — in the mean time — play nice, cool kids!