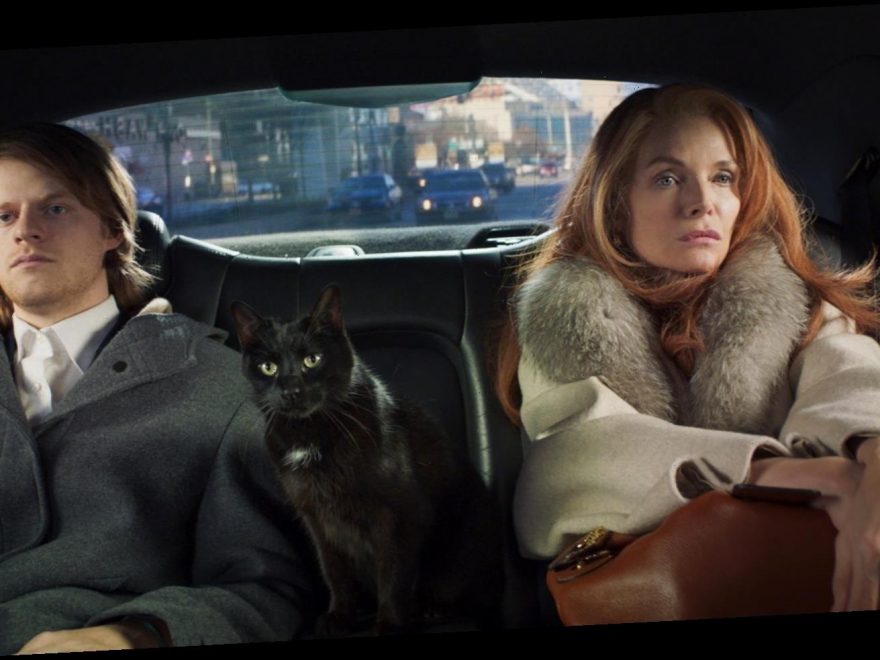 New York Film Festival closing-night selection “French Exit” is that rare gem of 2020: a high-profile new movie that nobody has seen. Released by Sony Pictures Classics, it is a close collaboration between two old friends, author-turned-screenwriter Patrick DeWitt and director Azazel Jacobs (“The Lovers”). The director lured Michelle Pfeiffer and Lucas Hedges to star in this comedy confection, adapted by DeWitt from his novel about a once-wealthy widow who leans on her handsome 20-something son for support. When she decamps to Paris with wads of cash after selling off all her worldly goods, it’s understood that her son will accompany her, leaving behind his one-time fiancee (Imogen Poots).

The thrice Oscar-nominated Pfeiffer (“Dangerous Liaisons,” “The Fabulous Baker Boys,” “Love Field”) runs with the juicy role of an over-the-top New York socialite who peels off 100 Euro notes everywhere she goes. The character “could seem caricaturish on the page,” Pfeiffer said. “My big concern was, ‘This has to be exactly right. It could go wrong so quickly.’” And yet, the actress added, “I would put it up there with my top five wonderful filmmaking experiences.”

She described the relationship between the down-on-her-luck mother and son as “two people people marooned on an island who wind up finding each other.”

Both Pfeiffer and Hedges (whom Jacobs found impressive in Broadway’s “The Waverly Gallery” and earned an Oscar nod for “Manchester By the Sea”) were drawn to the script’s humorous, surreal tone. Jacobs compares it to Jean Renoir and Luis Bunuel, who trapped groups of people in an enclosed space in “The Rules of the Game” and “The Exterminating Angel,” respectively.

“Stories about class draw me in,” said the director, who finished the film last week. “We all talked about ‘Playtime,’ ‘The King of Comedy’ and ‘Trouble in Paradise,’ about the sense of theatrics that happens when people get packed in a room in all different socioeconomic levels and what happens when things shift in their lives.”

Pfeiffer created a compilation of people she knew, from friends’ parents to members of the New York socialite elite, who often made her feel “weirdly outside,” she said, “especially when they all got together. I always felt very pedestrian around them…You realize we are living in our own little bubble, depending on what bubble you grew up in. You develop certain survival skills, and they’re different depending on what your experience has been.”

The comedy was in DeWitt’s script, the actors said. “I have found in my life in the most dire situations people are at their funniest,” said Pfeiffer. “When my father and mother died, it’s a way for people to release; it’s a defense mechanism. Humor is what makes [the movie] so real, actually.”

“Comedy is a mystery to me on some level,” said Hedges. “There’s nothing funny about the idea of being funny. As a concept it doesn’t make any sense. Buster Keaton said, ‘comedians they do funny things, and great comedians do things funny.’ That indicates it’s always a reflection more of how they lived and what they’re trying to do. Humor comes from a genuine impulse within them. I’m the funniest when I least want to be funny.”

Jacobs shot the low-budget independent film in Montreal with a range of actors who could “balance and contrast each other,” he said. “Interesting sparks come from these actors.” His biggest challenge was how to move the ensemble of eight around an enclosed set and “keep things escalating…using the space in the best way.”

In a slim year for Oscar contenders, this entertaining dramedy costarring Tracy Letts, Valerie Mahaffey, Susan Coyne, Danielle Macdonald and Isaach De Bankolé will likely get more attention than usual. Pfeiffer as a stylized Brahmin and the reactive, soft-spoken Hedges effectively play off each other’s opposite energy and could slip into Best Actress and Supporting Actor contention.