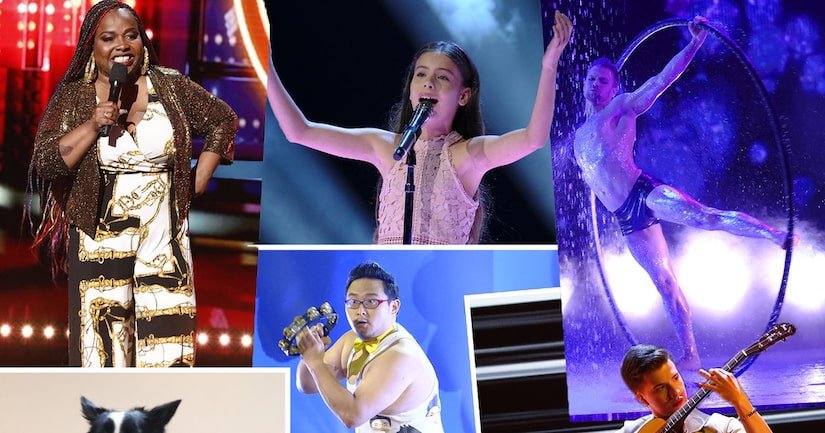 Get inspired by a choir, blown away by two magicians, laugh with a great comedian and then wonder what the hell you’re watching when Gonzo hits the stage.

It was the last round of the quarterfinals and "America’s Got Talent" delivered its most diverse lineup yet this season.

There were only three solo singers out of twelve acts and one of them performs opera, which is an incredible testament to the variety for talent this season has showcased as "AGT" tends to whittle down to at least half singers.

Instead, we had two magicians, a beatboxing crew, a stand-up comedian, a dog act, a guitarist, a choir and a hoop aerialist returning as the Wild Card. Oh, and then there’s Gonzo, the tambourine man from Japan who is … we’ll just go with interesting.

It was an interesting night, though, as many of the acts faltered from heights we’ve seen them achieve in past rounds. In fact, we’d argue that only a handful of them actually really killed it with their live debuts.

Simon slammed his red X a few times on the night as the acts just weren’t stepping it up from previous weeks. That said, there were a few truly incredible performances that we’ll remember for a long time coming. And no, Howie, we’re not talking about the tambourine act.

Who do I think I am? you ask. Well, I spent nearly a decade of my life sweating and bleeding to the music as a dancer. From a young boy learning a shuffle-ball-change to performing with the St. Louis Ballet Company, I experienced the ups and downs of one of the most difficult physically demanding sports on the planet. During this time, I was also a member of the St. Louis Symphony Youth Orchestra, as well as a gymnast, writer and cartoonist. I had a lot more energy in my younger years. And I’ve spent the last seventeen years analyzing and critiquing reality competition shows for various media publications. I’ve got this.

Fair warning, since I’m safe at home, I’m probably going to be a little harsher than my colleagues Howie Mandel, Gabrielle Union, Julianne Hough and Simon Cowell. But I might be nicer, too. Maybe.

And just for fun through this round, I’m gonna rank them from worst to first to see who emerges as my Top 7 and winner each week.

(tambourine) Gonzo finally ran out of material. On top of that, his music was so loud you couldn’t hear the tambourine, which maybe showed just how out of ideas he was. The kids were cute and he really does play it with energy and some unique moves, but it was just too much of the same.

(aerialist) Well this just fell completely flat. There was nothing new and even when he elevated himself, he barely used the hoop. Adding water just doesn’t make something feel fresh and exciting. Matthew was a Wild Card contender to come back but this routine got so boring so fast, we think he might be going home again.

(dog act) This wasn’t his smoothest performance, making us believe that Falco just learned some of these stunts, but there’s still a certain charm about him and Lukas together. It’s clear how much they love one another, but Falco was perhaps a little too excited or confused at times. The routine lacked a sharpness and cleanliness it needed to really give that wow factor.

(singer) "LIfe on Mars" is a tough one to cover and while MacKenzie gave it his all, it felt more like him trying to show off riffs than really sell the lyric or story of the song. This is a powerful song with a wistful melancholy about it, and MacKenzie drifted in and out of the emotion of the piece when he took notes to show off. It left the whole piece sounding a little disjointed and disingenuous, even though he does have an incredible voice.

(beatboxers) It was smart jumping on the biggest song of the summer, "Old Town Road," with their own take, but mixing it with "O Fortuna" may have made for a performance a little too alien to connect with contemporary audiences. They spent so much time in operatic high voice, that we missed some of the versatility of what they’ve shown us in the past. This might be an interesting showpiece during a full concert, but as a showcase trying to score votes, this could really go either way. They’re incredible at what they do, but was that too odd?

(choir) While there were moments throughout their take on "The Champion," so much of it just sounded the same. They didn’t take full advantage of their numbers and different vocal ranges to do anything dynamic or special with it. Every bit of it sounded like full choir, even when it wasn’t, which was actually surprising. They had a chance to find an arrangement that really helped them stand out and make an emotional connection, and this just didn’t do that. They sound solid, but we wanted more depth.

(magician) Anyone who’s played some of those "magic" games online where you shift up and over and diagonal, it’s all about the math and controlling probability. By arranging males and females just so, Dom was able to guarantee we would all land on the same spot in four moves no matter what. It was more fun seeing him interact with his video doubles, make Tape Face appear and predict Simon not standing up. The whole presentation was better than the big trick.

(comedian) Jackie has such a conversational delivery, she does a great job of sharing her world almost immediately. We would have loved more sharp jokes, but there’s no denying she had a lot of fun exploring the world of online dating and even the differences between white people and black people dating. It’s all relatable and she has an easy charm and affability about her.

(singer) While it took a bit to really get into the song, this turned into a really nice showcase for Benicio, and a timely original song about staying humble and connected to your roots as your star ascends. Benicio is easily one of the breakout stars of this season, and he really showed why with a powerfully real performance on a song that felt appropriate for his age and his story. That’s how you show another level to your talent.

(magician) The presentation wasn’t as mind-blowing as his first act, but the magic was. How great that Eric can do magic with all kinds of different objects. This time he made candy and Rubik’s Cubes interchangeable and even with the slightest of mishaps, everything was mesmerizing and brilliantly seductive. He truly is a world-class magician and an absolute blast to watch.

(singer) This one got a little boring in a few spots, but Emanne has an incredible instrument and is able to connect with these pieces in another language and the barrier doesn’t matter. At only ten years old, it’s incredible how mature and polished her voice is and the incredible range she’s developed already. Her career in opera is all but established at this point, no matter what happens on this show.

(guitarist) There are sounds a guitar makes and then there are the sounds Marcin can make with a guitar. We’ve seen a lot of guitarists do a lot of cool things, but he never seems to stop trying to come up with new and inventive ways to elicit sound out of the instrument. It would have been nicer to have a little more musicality in the piece as it was more of a showcase of talent and virtuosity, but there’s no faulting his brilliance.

This is the first week where we think we may have gotten this one exactly right with our rankings above. The only act outside of our Top 7 that could stand a chance is Berywam, but we really think they lost that connection with an unusual arrangement and unexpected performance.

Unless, that is, America absolutely fell in love with the adorable Falco and bumps him into the next round. If that were to happen, we suspect one of the magicians would go, though which America liked better is really a toss-up. It just depends on if Dom really wowed them with his math game or not.

"America’s Got Talent" airs Tuesdays and Wedesdays at 8 p.m. ET on NBC.