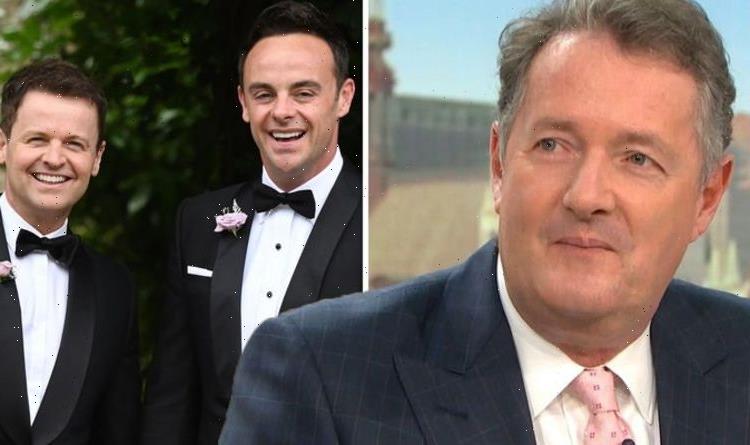 Ant McPartlin and Declan Donnelly have confirmed they’ll be hosting a new ITV quiz show Ant and Dec’s Limitless Win. The presenting duo announced the news hours before the NTAs where they are nominated for the Best Presenter prize. The news comes following Piers Morgan’s cheeky jibe at the pair for “cheating” as he commented on their 19-year winning streak at the ceremony.

The new quiz show will feature the world’s first limitless jackpot and a never-ending money ladder.

Contestants will be asked questions which if answered correctly will lead them to climb the ladder.

But if players “push their luck too far” they’ll go home with nothing.

Read more: Mark Labbett warns Darragh Ennis to not get in the way of mic at NTAs

“It’s something we’ve been developing with Hello Dolly and ITV for a while now and we can’t wait for you all to experience it. We hope you love it as much as we do.”

Dec added: “It’s been a number of years since we launched a brand new TV format, it’s not something we do very often!

“But we’ve hit on something that is groundbreaking and innovative, and that’s why we are so excited to host this series and bring it to the nation.”

“It’s hugely exciting to be working with the wonderful Ant and Dec on a new primetime entertainment format where contestants can win a limitless cash prize!” Katie Rawcliffe, ITV Head of Entertainment Commissioning said.

“Unpredictable, tense and guaranteed to have viewers on the edge of their seats, this is a quiz show, unlike anything you’ll have seen before.”

The Geordie duo currently host Saturday Night Takeaway, I’m A Celebrity…Get Me Out Of Here! and Britain’s Got Talent.

On Thursday, ahead of the NTAs, Piers blasted the pair for winning the Best Presenter gong 19 years in a row.

This year Ant and Dec go up against Piers, This Morning’s Holly Willoughby, Bradley Walsh and Alison Hammond.

He remarked: “If they had to do this individually, how would they get on? I think it’s actually cheating to do it as a pair.

“I deserve to win because everyone’s sick and tired of Ant and Dec automatically winning this award, which bears no relation to reality.

“I think it’s time the procession came to a shuddering halt and the Morgan bandwagon was rewarded with glory.

“We can’t have those two little vain-glorious Geordies standing there for the 20th consecutive year.”

“Ant got [an award] one year when he hadn’t even worked. It’s ridiculous,” the former GMB host told The Mirror.

Despite Piers’ comments, Ant and Dec fans are keen to see the pair win again as one tweeted: “Oh good NTAs tonight and I’m excited to watch Ant and Dec win one for the 20th year in a row.”

While a third added: “If anybody was to ever win the Ant and Dec National Television Award off of Ant and Dec, it would have to be Alison Hammond #NTAs.”

The National Television Awards will air on ITV on Thursday from 7.30pm.