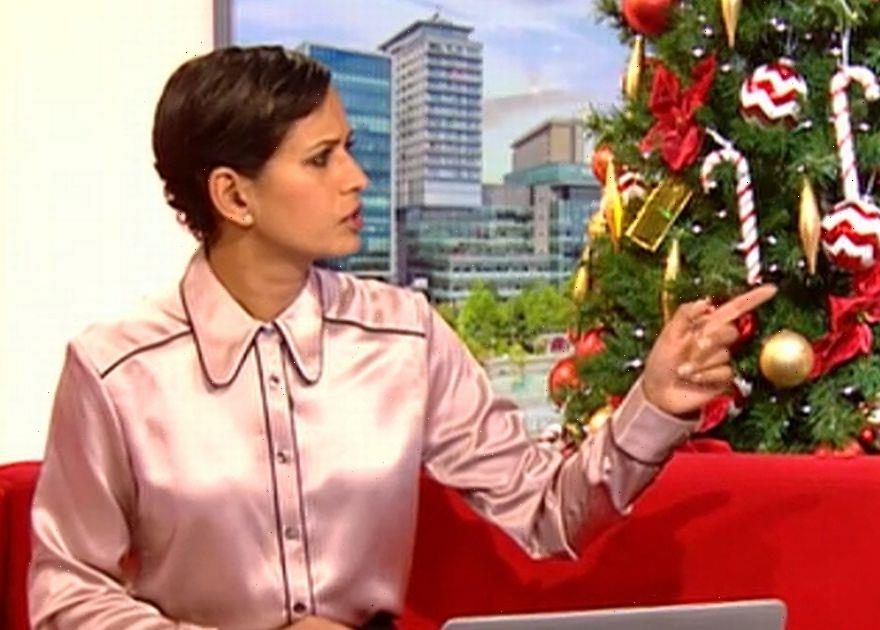 Naga Munchetty was left fuming at her BBC colleague Carol Kirkwood when she "spoiled" her Christmas Day report during a broadcast.

BBC weather girl Carol Kirkwood had been telling viewers about what they can expect from the next couple of days when Naga became rather baffled in the studio – and stopped Carol in her tracks.

Carol was just wrapping up her Christmas Eve forecast for the day (December 24) leading into the morning of Christmas Day – which she had planned to tell viewers about later in the show.

Wrapping up the report, Carol said: "Temperature wise tonight, cold in the north, not as cold as we come further south, and I'll bring you the Christmas Day forecast in about half an hour, Naga and Charlie…"

Presenter Charlie Stayt thanked Carol, but a baffled pointed at Carol on the screen and said: "I'm a bit confused. Carol finished on Saturday. Did she skip… that is Christmas Day, Saturday, isn't it Carol?"

Carol replied: "Yes," before pointing to the text on her screen with the weather graphics on it.

Charlie stepped in to explain that Carol was going to tell viewers more about Christmas Day later in the show.

He told her: "Look, it says Christmas Day up there but it says six in the morning…"

Naga realised that Charlie had been blocking the screen, and told him: "Oh, right! That's what I didn't see because you were in the way."

Charlie continued: "She's going to do the rest of Christmas Day later on,", and Munchetty replied: "Yes, thank you."

However, the segment descended into more chaos when Carol started revealing the forecast for Christmas Day despite initially explaining that she'd do so later in the show.

Gutted Naga felt that Carol "spoiled" the surprise, and she cried out: "Don't spoil it!"

Kirkwood burst out laughing as she continued anyway: "Because there's snow in the tops of the hills in Wales."

Naga laughed as she said: "You teased it and now you're spoiling it!"

This is a live TV story and is constantly being updated.