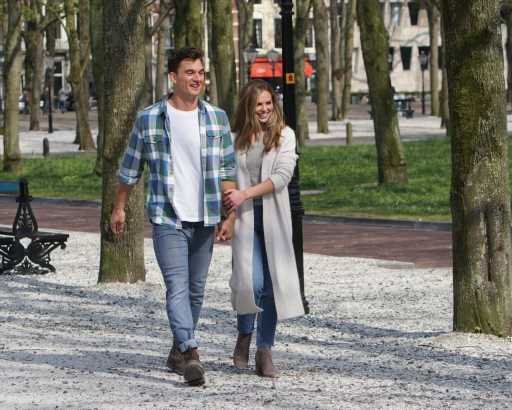 Before The Bachelorette, Cameron was a general contractor with dreams of breaking into the modeling world.

Cameron says that, even before he began filming, he made the decision to move from Florida to New York to start seriously pursuing modeling.

“As much as I love Jupiter and I love construction […] prior to the show, I was going to move to New York City to go for my modeling career,” he recently said on the Bachelor Party podcast.

In fact, he’d already made the move when he got the call that he was cast, that is “if you consider staying on Matt’s futon for weeks before the show.”

Just before he filmed The Bachelorette, Cameron felt he was finally getting his modeling career off the ground.

“I was up in New York after that just like three or four weeks doing a bunch of test shoots, trying to get my book built, and work with my agency up here, and so I was gonna move up here, whatever happened with the show,” he said.

Cameron says he knows construction will always be there, but his time as a model is fleeting.

As of now, Cameron is going along with the plan he laid out prior to The Bachelorette–he’s chasing his modeling dreams in New York City.

Tyler C. will soon be officially living in New York with his new roommate

“Now we’re gonna get an apartment together and figure it out. We’re moving up in the world. We’re looking at apartments this week and next week and Myler is staying strong, that’s our couple name,” he said on the podcast.

Name a more lit spin squad? Who’s going to spin with us next?

Cameron went on to explain why he’d rather live with James than alone.

“That’s my guy. I was gonna get a one-bedroom but I think it’s important to surround yourself with people that are doing good things and that’s my partner with ABC Food Tours. I’ve been living on his couch for a while now and he hasn’t gotten sick of me,” he said.

According to Cameron, he and James have a special friendship.

“He’s been a true blessing. He’s a friend that I’ll always cherish. He’s allowed me to kind of get on my feet here,” he said.

Read more: ‘The Bachelorette’: Fans Are Finally Chilling Out With The Negative Comments On Jed Wyatt’s Instagram