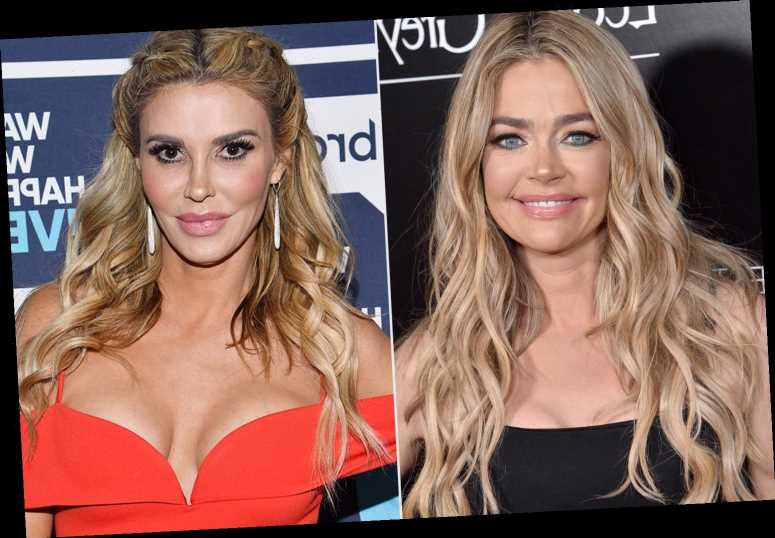 Brandi Glanville is denying that she altered her text message exchange with Denise Richards.

On Friday's episode of the Brandi Glanville Unfiltered podcast, Glanville discussed this week's Real Housewives of Beverly Hills season 10 finale, which saw Richards suggest that Glanville could have used an app to revise their texts.

"It seems that all of the ladies really believe you," said Glanville's producer, Ryan Tillotson.

"Well, because I'm not lying," replied Glanville, 49. "Because I'm telling the truth, and they've all seen my phone."

"[Denise], she said that there's an app," Glanville continued with a laugh. "You know me, I can barely use — my friend Michael was like, 'I'm gonna have to go and defend you. You can barely even use your iPhone.' "

On Wednesday's episode of the Bravo reality series, Richards claimed that Glanville, 47, may have somehow photoshopped their text messages. (On a previous episode, Glanville passed around her phone at Teddi Mellencamp Arroyave's baby shower to show the women "proof" of her close relationship with Denise.)

"There is an app that can revise text messages, so whatever Brandi has, I don't even care," Richards said during a confessional.

"If I'm going to be put in a corner where I have to present text messages, not only will I present Brandi's, I will also present Lisa Rinna's, and I don't think either one of them want me to do that," she continued. "But I will."

Referencing Richards' comments that she would make their texts public, Glanville said on her podcast, "Please! Well then do it!"

During the finale, Richards denied having spoken to Glanville since the cast's Rome trip, where the claim that the pair had slept together was brought up with all of the Housewives. (Richards, who has been married to Aaron Phypers since 2018, has adamantly denied having an affair with Glanville.) Richards did, however, confirm that she had sent a cease and desist. Rumors about Richards and Glanville hooking up have been circulating since early this year.

Although Glanville has maintained that the pair slept with one another — even sharing alleged text messages and a photo in which she appears to kiss Richards in an attempt to support her claim — Richards has continued to deny that they were intimate.

Despite their conflicting accounts, Glanville said she would still like to have a conversation with Richards about the entire situation.

"I honestly wanted to go to Rome as well, because once you say it on-camera, it just sucks that I couldn't follow it up and have a conversation with her," she said. "But again, I wasn't going to say it 100 percent on camera. And then once you tell one person in the group, which I told Kim [Richards], you kind of have to. Otherwise, if it doesn't come out of your mouth, the story's going to get misconstrued. It's going to be that game of telephone where it's going to be just a giant s— show." "So I said exactly what happened, and I wanted to follow it up seeing her and I told her that. And she even said she knew I was going to the party — that's why she didn't come, because I texted her. I said, 'I really need to talk to you,'" Glanville continued, referencing Richards' absence from Dorit Kemsley's housewarming party on Wednesday's episode.

Though Richards initially said that she had a "family emergency" and couldn't attend Kemsley's evening bash, she later confessed to Rinna by the episode's end that her excuse was a lie — which she used when she found out Glanville would be attending.

"I did not want to go and have her create some Jerry f—ing Springer moment," Richards told Rinna about Glanville.

In retrospect, Glanville said she had no idea the Wild Things star would not attend Kemsley's party after they texted earlier that day.

"I thought that she … would want to confront me," Glanville said on her podcast. "She's not that person that runs away from something, in my eyes. So the fact that she's running away from this just, I don't think she can act her way out of this one."

"The truth hurts sometimes," said Glanville. "I would love to have a conversation with her. Now that I've seen all the things that she's said, all of her contradictions, it's hard."

"Maybe she has an app for that!" she said.

The season 10 reunion of The Real Housewives of Beverly Hills begins Wednesday at 9 p.m. ET on Bravo.