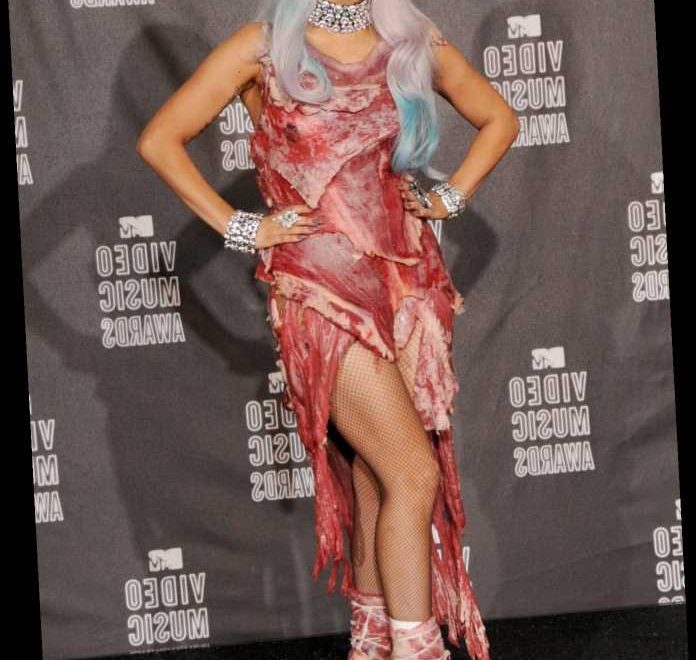 One of Gaga’s most outrageous looks ever, the meat dress shocked and stunned in 2010.

She Also Wore This Elegant Number Before she slipped into her iconic meat dress, Gaga walked the carpet in a dress that should have (and could have) hung in the Louvre.

Kesha Showed Us a Different Kind of ‘Tik Tok’ Before TikTok was a glimmer in Gen Z’s collective eye, Kesha (sorry, she went by Ke$ha back then) was taking the VMAs white carpet by storm after releasing her hit single, “Tik Tok.” Cher rocked the same black, sheer leotard with a black leather jacket that she wore thirty years earlier while on her 1989 If I Could Turn Back Time tour.

Ciara Floated Across the White Carpet Have you ever seen someone look so ethereal? In a feathered ensemble, the songstress looked like she could fly right into the awards (in, like, a totally gorgeous way). The then 18-year-old Disney star was just getting into the music scene at the time. She released her first record, Kiss & Tell, with her band Selena Gomez & the Scene in 2009.

The Biebs and Usher Coordinated Their ‘Fits Usher taught his protégé Justin Bieber, then 16, how to look cool on the carpet.

Nicki Minaj Was Pretty in Pink I spy Academy Award-winning actor Jared Leto holding onto his Moonman that he won with his band, 30 Seconds to Mars.

It Was True Love True Blood star Joe Manganiello looked handsome as ever on walking the carpet.

Emma Stone’s Look Got an Easy A The actress kept it simple in an LBLD (little black leather dress).

The Jersey Shore Cast G.T.L.’d Before the Carpet How else would you expect the stars of the MTV hit show to get ready? In 2009, Swift had her mic stolen from her by Kanye West (who could forget), but she returned to the stage in 2010 to perform “Innocent,” a song she wrote about the rapper. The performance started with a video of the moment playing on a TV before Swift started singing. Don’t worry, Kanye was there, too — in a red suit to premiere his song “Runaway.” Timberlake showed up with his The Social Network costars, Jesse Eisenberg and Andrew Garfield. The actress looked oh-so-chic in her skintight blue leather mini-dress. Remember singing and dancing to “Bottoms Up” and feeling like the club couldn’t even handle you? The Trey Songz number was released a decade ago.

She Is America’s Next Top Real Housewife Before she was on Real Housewives of Atlanta, Eva Marcille won America’s Next Top Model. Look at her strut the VMAs runway! 2010 was the year Drake released his first studio album, Thank Me Later, marking his official crossover from playing Jimmy on Degrassi to becoming the next big hip-hop artist. Katy Perry was still a “California Gurl” when she was nominated for the hit song twice at the 2010 VMAs.