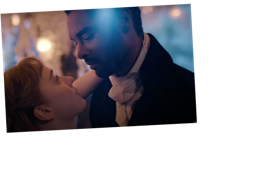 Netflix has released the first official trailer for “Bridgerton,” an ornate period romance following the marriage prospects of Regency London’s upper crust. From powerhouse producer Shonda Rhimes, “Bridgerton” marks Netflix’s first scripted trip to Shondaland under her sweeping new deal with the streamer. The “Grey’s Anatomy” and “Scandal” creator is flexing new muscles in this costume drama genre, and she will inject new life into the familiar format with colorblind casting and her signature flair for melodrama and witty dialogue. From the looks of this trailer, “Bridgerton” has only certain hallmarks of a Shondaland show: It’s long on nosy gossips and sexy intrigue, and short on declaratory monologues and plane crashes.

“Bridgerton” is an adaptation of Julia Quinn’s best-selling series of novels following the eight siblings of the titled family. Well-respected and closely tight-knit, the quest is for each of the Bridgerton kids to find their true love. Netflix’s official synopsis reads: “Inspired by the bestselling novels, the series follows Daphne Bridgerton, the eldest daughter of the powerful Bridgerton family as she makes her debut onto Regency London’s competitive marriage market. As her pursuit of love unravels, the high society scandal sheet written by the mysterious Lady Whistledown casts criticisms on Daphne who has caught the eye of London’s most desirable duke…”

The trailer offers a bit more information, revealing an unlikely connection between a roguish Duke (Regé-Jean Page) and Daphne Bridgerton (Phoebe Dynevor). After an initial spark gives way to a charged mistrust, the two strike a deal to fake a courtship in order to relieve some of the pressure to marry. With his dashing good looks and the casanova role, Page has all the makings of a Doctor McDreamy for a new generation.

Though we don’t see her in the trailer, “Bridgerton” stars the venerable Julie Andrews as Lady Whistledown, the gossip columnist whose iconic voice narrates the proceedings. The prolific British stage and screen actress Adjoa Andoh, who played Nelson Mandela’s Chief of Staff Brenda Mazibuko alongside Morgan Freeman in Clint Eastwood’s “Invictus,” shares top billing with Andrews.

Rhimes is producing, with Chris Van Dusen acting as showrunner.

“Bridgerton” debuts December 25 on Netflix. Watch the official trailer for the romantic drama below: