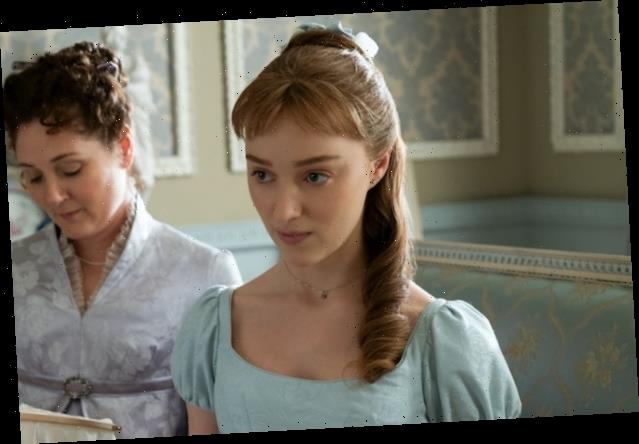 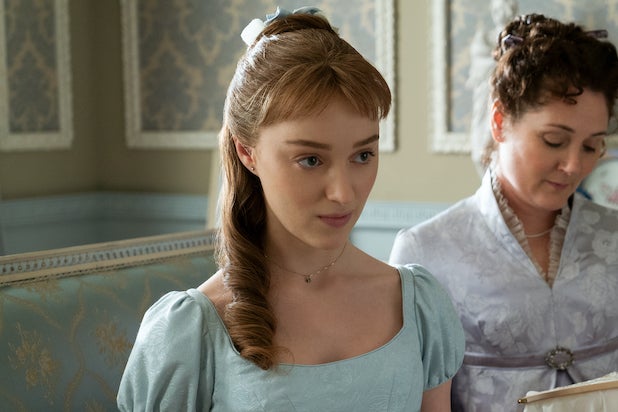 (Warning: This post contains spoilers through the first season finale of “Bridgerton.”)

But star Phoebe Dynevor — who plays Daphne Bridgerton, the eldest daughter of the Bridgerton family who falls in love with and marries Simon Basset, aka the Duke of Hastings, halfway through the steamy Netflix drama’s first season — said the sex isn’t just there because it’s fun to watch.

That sexual evolution begins before Daphne and Simon are wed, when he teaches her how to pleasure herself. Simon reveals that and more to Daphne, as she knew nothing about sex before the duke came along. Throughout the first few days of their marriage, Simon gives Daphne a crash course in all things love-making. And that includes male-on-female oral sex, an act that’s less often depicted on screen.

“It is sad. I think Daphne is a feminist born in the wrong time,” Dynevor said. “She’s very empowered and she really does have her own voice and she doesn’t want to love anyone that she doesn’t love — even though she’s not really sure what love is when we first meet her. But also, no one has told her about her sexuality, she doesn’t know what sex is or lust or all of those feelings. So we get to discover that with her on the journey, which is a really lovely aspect of it, along with the female gaze that runs through the show.”

Dynevor said “every person can relate to finding their sexuality” as Daphne does in “Bridgerton,” “but not when you’ve never heard about it, in the context of Regency England where you’re literally not exposed to that sort of conversation — you just have no idea that that even exists.”

She added, “It was a fascinating part of bringing the character to life and understanding her struggles, which there are a lot of at that time.”

Page, Dynevor and “Bridgerton” creator Chris Van Dusen worked closely with an intimacy coordinator to plan out Daphne and Simon’s on-screen sexual activities step-by-step, as the actors simulated sex and were partially nude in some scenes. Dynevor said that the close collaboration made the actors feel “really safe” in what would normally be very private moments for a real-life couple.

“We just wanted to tell the story in a really truthful way and also the journey they go on with the sex,” she said. “Daphne doesn’t know anything about sex when they first get together and then by the end, she’s very much empowered and in control in her sexuality. So it was finding that journey as well, all those aspects that sort of brought it together.”

As fans who have finished the first season of “Bridgerton” now know, Daphne’s sexual awakening isn’t always a pleasant experience, as it leads to one of the most upsetting moments on the show: when Daphne figures out that the ejaculation of semen into the vagina is what leads to reproduction — something Simon has specifically been avoiding doing so as not to impregnate Daphne.

This is a huge betrayal to Daphne, who believed her husband actually could not have children, as opposed to just not wanting them.

“I think there’s even more frustration there for her because she’s so desperate to be in the know,” Dynevor said. “She’s someone that soaks up knowledge and wants to know about everything in the world and every human being. She’s super empathetic. She really wants to know Simon’s story and where he came from and what makes him so shut off in a strange way. So I think it’s even more frustrating that people are hiding stuff from her because she’s so the opposite of that in her nature. And also, just the frustrations of being kept in the dark, which must be so frustrating. It was an important aspect to their relationship, really. I mean, it’s so fundamental, isn’t it? I think that scene is such a climax to the show, because even me and Rege would have conversations in real life about where he stood versus where I stood and it made it feel a little bit more real.”

All is well that ends well, though, when Simon decides not to let his dead father’s horrible parenting get in the way of his own happiness with Daphne, and the two have their first child in the final moments of the finale.

“Bridgerton” has not yet been renewed for a second season, but Dynevor is hoping it will be and that fans will be able to see Daphne and Simon’s story continue — along with her older brother, Anthony’s (Jonathan Bailey), journey.

“I think it’s lovely ending it how it did, it’s nice to have a happy ending,” Dynevor said. “But also there’s a lot of places their relationship could go and Anthony would so involved in Daphne’s matchmaking that I think she’ll probably have some sort of a say in his. So I’d be intrigued to see how they’d take that storyline and how much Daphne would be involved in his.”

Check back with TheWrap throughout the weekend for more “Bridgerton” coverage, including interviews with Page and Van Dusen.