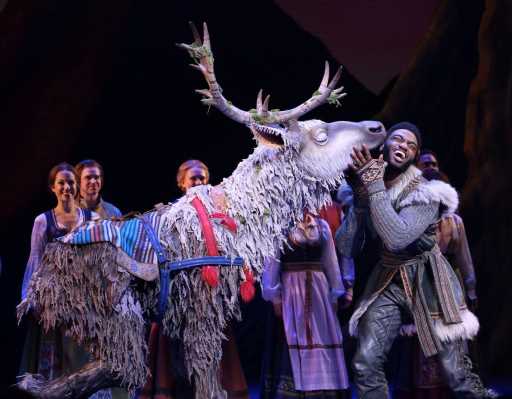 Whether they’re creating a streaming platform or opening a new musical on Broadway, Disney is pretty magical. According to some actors, it was through watching Broadway musicals, like The Lion King, that reinforced their love of theater and performing. Here’s what Noah J. Ricketts and Michael James Scott had to say about the diversity in Disney’s stage productions.

Beauty and the Beast opened on Broadway about 25 years ago. Since then, Disney fans flocked the Broadway in New York City to see their favorite animated films come to life on the stage. Over the years, Disney created a handful of award-winning Broadway musicals, from Newsies to Mary Poppins to The Lion King.

That tradition continues to this day, with the success of Disney’s most recently released musical, Frozen. At RuPaul’s DragCon, cast and crew members discussed the behind-the-scenes work that goes into creating Disney magic.

There are multiple Disney shows on Broadway now, including ‘The Lion King,’ ‘Frozen,’ and ‘Aladdin’

If you are looking to see a Disney musical on Broadway, you’re in luck. The company currently has three shows available for fans to watch. The stage production of The Lion King is one of Broadway’s most beloved shows. Opening at the Minskoff Theatre in 2006, the musical continues to perform there. The show earned multiple Tony Awards and nominations along the way.

Disney’s most recently released musical on Broadway, Frozen, earned the Tony nominations for Best Musical, Best Book of a Musical, and Best Original Score. The stage production of Aladdin is also available on Broadway, dazzling fans with its special effects and its cast.

Historically, Disney musicals on Broadway boasted diversity and inclusion. That legacy continues today with characters like Kristoff in Frozen and the Genie in Aladdin. During a panel at RuPaul’s DragCon in New York City, a few cast members discussed their first moments experiencing a Disney Broadway production. Primarily, they touched on how Disney’s diversity sparked an interest in them.

This year, RuPaul’s DragCon was sprinkled with just a pinch of Disney magic. Cast members and crew members appeared at the panel hosted by drag performers Nina West and Alexis Michelle, entitled “Disney On Broadway: Serving Hair, Face, and Looks for 25 Years.” There, actors like Alyssa Fox, Bradley Gibson, Noah J. Ricketts, and Michael James Scott touched on their relationship and experiences with Disney.

“Beauty and the Beast was my first show I saw,” Michael James Scott said. “There was one chocolate man that was a spoon in the ‘Be Our Guest’ number, and I was like, ‘I could be a spoon, too!’”

“My first show that I saw, Disney show that I saw was actually on tour. I used to be obsessed with theater as a kid and, we used to get those subscriptions to the, you know, the Broadway tours so, The Lion King was mine, as well,” said Noah J. Ricketts. “I remember the animals coming from the back of the house all the way up to the stage and my mind being completely blown. And also I had a very similar moment spoon moment when I saw young Simba, and I was like ‘that’s gonna be me!’ So, that was it. Lion King definitely changed my life and that ‘He Lives in You’ it just gets me every time.”

Tickets for Frozen, The Lion King, and Aladdin on Broadway are available for purchase online and at the box office.