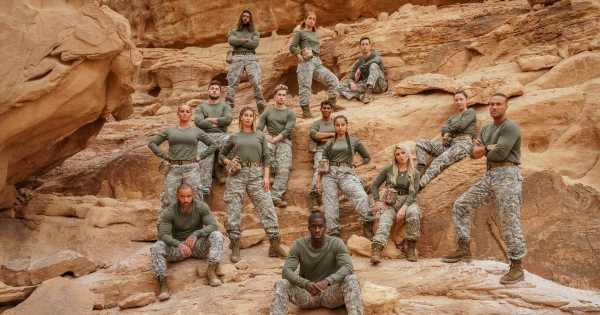 As Celebrity SAS: Who Dares Wins returns to our screens for another nail biting series, we sat down with some of the stars of the show to discuss the trials and tribulations of putting themselves through such a gruelling process.

Tested to their very limits both physically and mentally, the survival challenge would push their bodies to breaking point and even left several of this year’s cast suffering from injuries – something, they admitted, they were keen to hide from their superiors in order to avoid being eliminated from the show.

Opening up about his own experience of injuries on the show, Paralympic high jumper Jonathan Broom-Edwards admitted that he had suffered a fair few during the series, including after the boxing scenes which are due to air in the very first episode of the series.

“Talking about the boxing, I was not quite knocked out but knocked down hard twice by Dwayne,” recalled the gold medallist with a wince.

While the beating was surely painful, it wasn’t a patch on the broken ribs he also earned later in the series. “I had a couple or ribs broken during murderball,” he admitted.

“I did get sent to the medics, but if you’ve got no evidence, on like the sats or something, you have a device on your finger to check your oxygen in the blood.

“If you don’t have any evidence of lung puncture you’re pretty much good to go.”

Explaining how he had managed to cope with the injury, which is renewed for being extremely painful, the Tokyo 2020 athlete said: “ I think I was in for an extra day and a half for my ribs and then I was just stretching to try and manage it.

"Basically to just try and protect that area as best I could – and just carried on.”

Fatima Whitbread shared a similar mentality, as the 61 year old athlete was determined not to be beaten by any injury she sustained while on the show.

Much like Jonathan, she too broke her ribs during the duration of the competition, and made a conscious point of hiding it to avoid being sent home.

“I just kept my mouth shut!” Confessed the retired javelin thrower. "It was quite painful, but it happened quite early on and I knew as the days went by I’d definitely done something because I couldn’t move when laying down and getting up and just trying to lift the bag up on my back.

“As they days go by more and more, everybody was trying to help me put my pack on my shoulders and just thought I’m not going to say anything because I still wanted to go further into the process. I just got on with it really. “

In a show of solidarity to his teammate, Jonathan praised her resilience as he admitted: “Fatima was carrying all the rest of us as well through that show! She’s an absolute beast!”

While Jonathan’s injury had been sustained in a brutal game of murderball, Fatima’s was far more unexpected, as a piece of equipment designed to assist her, actually ended up causing her harm.

Describing the incident, she recalled: “I think it was jumping out of the helicopter that did it. What happened was two things really, I was with Maisie, she was my half, we got very close to the edge of the helicopter and what they didn’t explain was they said ‘don’t let the bag go too soon, or you’ll swim miles to get it.’

“But what they didn’t say, was ‘let the bag out a little bit.’ And I didn’t let the bag go a little bit, and it bounced because it’s buoyant and there’s a metal bit; a metal handle underneath and it sheared right up my left breast.

“I was in agony! It sheared up my breast so I wasn’t aware of what the bottle on my waistband had done as well until much later. But the bottle had also punched up because it’s buoyant and I think that’s what cracked my ribs.”

TOWIE star Pete Wicks also had a close brush with danger during a water challenge, as he was knocked unconscious while making the leap.

Yet he laughs it off with a trademark humour, teasingly telling his castmates: “I was unconscious! That was nice. It was the best I slept while floating face down in the water.”

Boxer Shannon Courtenay also confessed she was struggling with an injury even before starting on the show and was actually pushing through her own agony for the entire series in order to see it through to the end.

“In the show, I didn’t tell any of the producers but I went in with a ruptured ACL and a torn meniscus so I wore a strap on my knee under my trousers that nobody knew about,” she revealed.

“I’ve had to have two operations since the show, but I was in agony the whole time I was filming.”

Not that anyone would have guessed, as all of the stars appeared to have nerves of steel as they took on the first set of challenges in episode one – something Fatima argued was very familiar to the athletes taking part.

“Sportspeople are very prone to carrying on with injuries,” she explained.

“There’s a very fine line between being peak condition and ill or injured. It’s a tightrope. You can be extremely fit but you can also easily fall off that tightrope one way or another and get an illness or injury.

“But you learn to work through those injuries, and you don’t obviously share that with anybody.”

Jonathan also agreed: “It’s such a balance to strike, because as athletes we have to prioritise recovery, but with SAS there was none of that. You know, crack on, survive.”

Celebrity SAS: Who Dares Wins returns to Channel 4 on Sunday 4 September at 9pm.