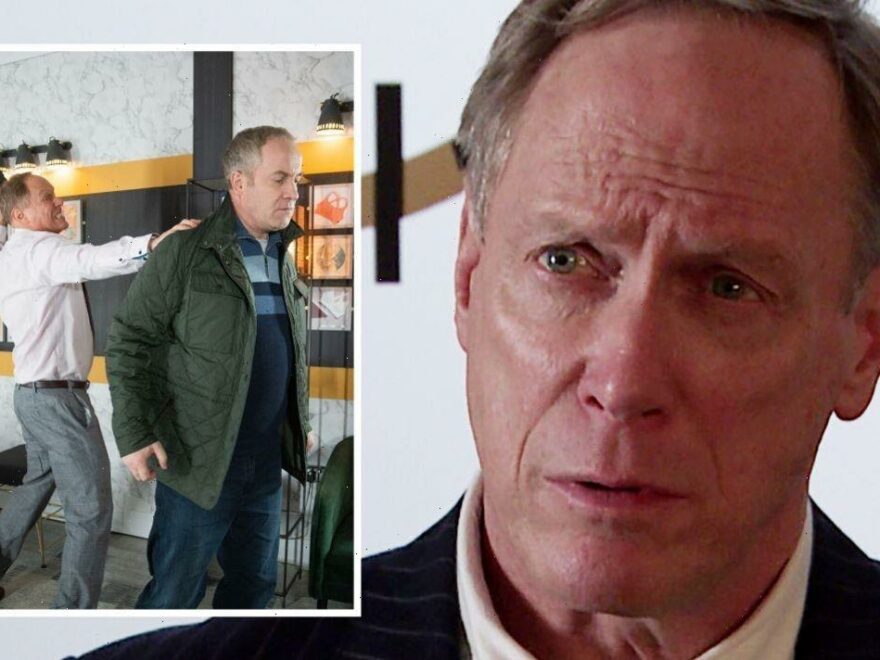 Stephen (played by Todd Boyce) killed Leo Thompkins (Joe Frost) after he began to dig a little too deep into Stephen’s financial troubles. His father, Teddy (Grant Burgin) began to dig into his son’s disappearance, but fell and was struck by a van at full speed, damaging his memory. However, in upcoming scenes he begins to remember the reason he was looking into Stephen, backing the villain into a corner.

Stephen begins to feel backed into a corner when Teddy starts his mission once again, and in turn, takes matters into his own hands.

Later this week, when Billy Mayhew (Daniel Brocklebank) says something to Teddy, it triggers a memory and as Stephen heads out of the factory, Teddy approaches, revealing that he now remembers everything.

He accuses Stephen of having done something to Leo, and as he leaves, Teddy grows angry, revealing that he remembers every word of their conversation before the accident.

Stephen leads Teddy into the factory, suggesting they can talk inside, and in the factory office, Teddy accuses Stephen of doing everything he can to stop him from going to Canada.

He exposes that he knows he killed Leo in a bid to have Jenny for himself, so when Teddy vows to report him to the police, Stephen whacks him over the head, killing him.

Coronation Street boss Iain McLeod, recently confirmed that no one is safe when it comes to Stephen’s rage.

He told Express.co.uk and other press: “Everyone should be worried. I know whenever you’ve got a serial killer on a soap the whole cast is worried.

“They are suddenly like, ‘Is it going to be me?’, whenever I ring an actor up and say., ‘Can you pop in for a chat?’ they are like, ‘Well that’s it, you know Todd’s going to do me in’ so that’s quite funny in that respect.

“But yes, lots of people should be worried. You know, I love this about Todd as well. When people say, ‘So you’re a serial killer are you?’ and he is like, ‘Well, no, I’m just a very desperate man backed into a corner’.

“He’s got a really enlightened view of who Stephen is I think. But yes, obviously we know now that he did away with Leo, partly out of necessity, partly out of male pride when he calls him an old man.

“But needless to say in the soap no body’s ever stayed buried for long and I love that story. I love that character.

“I don’t know what this says about me or the wider viewing public but when he first came in, I know everyone was a bit like that, ‘Oh his accent is a bit of a thing, don’t know what to make of this accent, in this show’.

“And then the moment he revealed himself to be evil, everyone went I get it now, I knew there was something, it’s not the accent it’s he is a wrongun.”

Throughout his life, Stephen is used to getting his own way, even if it is at the cost of other people’s lives.

So when Carla Connor (Alison King) stands in his way and makes a fool of the businessman in front of some important investors, a new grudge is formed.

Todd Boyce recently teased fans that Carla needs to watch her back when it comes to going up against Stephen and that she may already be on his hit list next.

Todd explained to Express.co.uk and other press: “Carla is getting on his nerves. She’s humiliated him on two occasions in front of his former colleagues when he was a big wig in Milan.

“They’ve sort of wandered into Underworld or into her business, I keep pretending that I am just doing some consultancy work, and she’s coming out the back.

“She just spoils my cover and she goes, ‘Get back to packing’. So she crushes me in front of them and so she’s annoying me.”

Iain added: “If anyone predicts what Stephen does to Carla, I’ll eat my hat. His plan is so out of the dark I’ll be incredibly surprised if anyone sees it coming over the hill.”