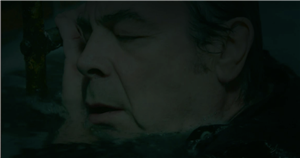 Coronation Street viewers were left disheartened on Friday after they witnessed Johnny Connor swept away to his death as he tried to rescue his estranged wife Jenny Connor in catastrophic scenes.

Brave Johnny took it upon himself to go down a large sink hole that emerged on the cobbles to save the one he loved.

Jenny was still alive when Johnny found her at the bottom of the pitch and the former couple were able to share a touching moment together before the tragic scenes.

However, this was short lived as Johnny sadly lost his life as he tried fighting to save himself.

Seeing the drama and distressing scenes unfold, viewers took to Twitter to share their sadness regarding Johnny's departure from the soap.

A fourth social media user said: "Literally crying my eyes out over Johnny."

Actor Richard Hawley who plays Johnny has been a part of the famous street for the last six years.

Since his time on the programme, the star has been involved in several hard-hitting story lines including the discovery of son's dead body, his turbulent relationship with Jenny and his recent visit to prison.

Speaking more about the death of his character, Richard explained the process behind Johnny's death, while admitting that he was ready to depart from the soap for quite some time.

He explained: "Iain the producer had known for some time that I was ready to go, I talked to him about it in the previous year and then all the plans and arrangements got stymied because of covid and I was actually very happy to be working through that year.

"I was very fortunate. It could have been then that I stayed but I live a long way from Coronation Street and I have done over six years and all the traveling back and forth was getting a bit much for me."

The actor added that felt joyful that Johnny was going to be killed off in such a dramatic way.

Richard continued: "He explained that the death in the big stunt was going to be Johnny, he outlined the story to me and I was absolutely overjoyed and knocked back by what he was planning because for me it is the completion of a great love story, which is what Sally Ann and I had wanted.

"You can’t get a truly great love story until it is over, until someone dies.

When asked whether he preferred a more tragic ending, the Corrie star said: "Absolutely, the one thing that soap doesn’t give you is a beginning, middle and end.

"By its very nature it is continuous. It’s only when you get the end put into place and you know what it is that everything else falls into place.

"The rest of Johnny’s story now makes sense. There is a really strong run of almost 7 years of his story. A man trying to redress some of the past, create a future, love, settle down, atone for past mistakes, and change and live well."

He added: "One of the things that was always important to me was that I wanted to explore the love and humanity of the character and I have been able to do that and particularly with this ending.

"Johnny and Jenny’s story throughout this week had drama, heart and humour.

"For the character it completes a journey, a tough journey in many ways. In itself it is a real story, action, humour, love, thrills and spills.

Coronation Street airs Monday, Wednesday and Fridays on ITV at 7.30pm and 8.30pm