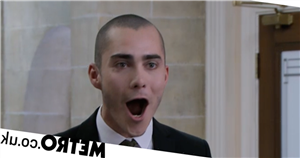 Coronation Street’s highly anticipated trial for Seb Franklin’s (Harry Visinoni) murder came to a close tonight, but the verdict wasn’t what fans were hoping for.

Following a tense week, the jury returned with a verdict in the first of Friday’s (September 10) two editions of the ITV soap, and murderer Corey Brent (Maximus Evans) was found not guilty.

Meanwhile, Kelly Neelan (Millie Gibson) was found guilty following Corey pinning his heinous crime on her, much to the fury of Imran Habeeb (Charlie De Melo) and Toyah Battersby (Georgia Taylor), who desperately tried to console her.

While viewers know that the vile teen did, in fact, murder Seb while Kelly attempted to stop him, it seemed the jury weren’t so convinced by her version of events.

The episode ended with Seb’s mum Abi Franklin (Sally Carman) staring at the killer in disbelief as Corey threw the grieving mother a sly wink as he exited the court with his dad Stefan (Paul Opacic), who had been bribing witnesses to deliver false testimonies in the hopes of securing Corey’s freedom.

Needless to say, Twitter erupted with rage as the credits rolled, especially since the storyline was based on real-life events and the killing of Sophie Lancaster, whom Corrie fans said the verdict made a ‘mockery’ of.