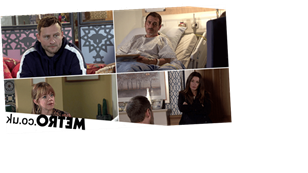 Lives and futures are hanging in the balance as a tough 2020 draws to a close in Coronation Street – as Peter Barlow (Chris Gascoyne) accepts that he is dying following liver failure, Ken (William Roache) and Carla (Alison King) are distraught.

Daniel makes a horrifying discovery as he finds Peter collapsed and covered in blood. Peter slumps to the ground and tells him not to tell Ken and Simon. As he gets to hospital, he learns he is suffering from liver failure.

Toyah and Imran fuss over Mason – neither of them notice Leanne watching from the window of the flat. Imran is told that Mason will be collected later in the day.

Adam calls round and reveals to Sarah he knows she told the police about the body in the woods. Sarah is worried about what he will say to the police.

Billy and Paul arrive at Speed Daal and Todd introduces Ajay, the manager at the helpline. Todd is pleased with the way the night goes as Ajay talks about how important it is not to get too involved with callers.

Shona tells David that she is ready to return to work and Roy agrees to let her start again on light duties.

Todd calls for Paul on his way to work and Billy is grateful to Todd. Paul takes a call from Will, Todd urges Paul to help him. Paul ends up arrested for assaulting a man he thinks is Will’s stepdad, Todd digs the boot in with the police. Billy later thanks Todd for his support for Paul and Summer while Paul lies alone in a police cell.

Tim surveys the array of toys Elaine gave him and confides in Sally that he doesn’t want them. He reveals that he is going to stash them away, Elaine is disappointed but tells him it’s up to him. Evelyn offers to sell them at the jumble sale but Dev soon learns that one of the cars is worth £200.

Adam confronts Gary in the furniture shop and suggests he dug up Rick’s body and Faye wonders what is going on.

Daniel confides in Ken what has happened to Peter. Ken visits Peter and is dismayed when depressed Peter that he is going to die.

When Imran reveals he turned down another foster baby as it would be too soon, Toyah is gutted. He tries to fix it but it’s too late.

Arthur calls into the cafe with a gift for Evelyn but she leaves him deflated.

Sarah returns to the flat with a bottle of wine and suggests to Adam that they see in the new year together. They decide to start again with a clean slate.

Kelly demands answers from Gary about Rick. Debbie quizzes Ray about Gary while Ray then offers alternate premises for Nick. When Sam calls over with a present for Nick, he makes a decision.

Having discovered that Bernie bought the toys, Tim buys the lot back and Elaine is pleased and suggests he sells the vintage car.

Paul confirms that he has been charged with assault and criminal damage. Billy and Paul clear the air, Summer is delighted but Todd is seething.

Daniel discovers that Peter has discharged himself from hospital.

Gary looks set to be caught in his web of lies as he reaches crisis point.

Steve plans fundraising for Oliver’s charity – he and Tim will be dressing up for a run.