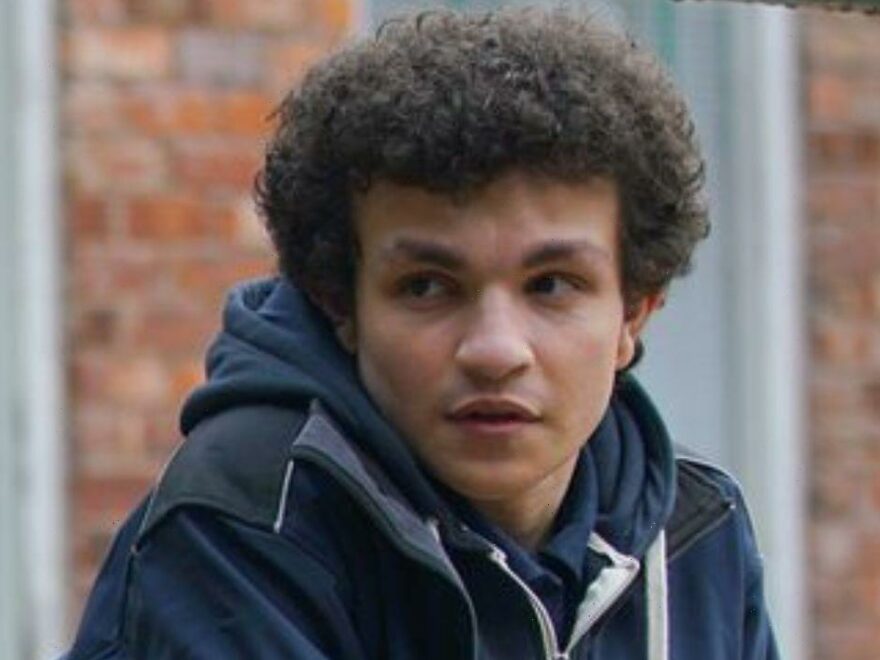 Corrie: Simon Barlow speaks to Kelly about his new job

The star, who is best known for playing Simon Barlow in the ITV soap, looked completely different to the character he portrays, as he donned facial hair while out for lunch in Chester. The 21-year-old showed off the stubble in an Instagram story he shared, posted by model and dancer fiancée Mollie Lockwood as they enjoyed some belated birthday celebrations for the actor.

The photo of the grinning actor was captioned “Late birthday celebrations for @alexbainofficial,” by his fiancée.

Alex reposted the story to his account with the message “I Love You!” followed by two love heart emojis in response.

His mature transformation was completely different to the young character he plays on the ITV cobbles.

However, he was still donning his signature curly locks though as he tucked into some smoked salmon toast and coffee at a local cafe.

The young couple announced their engagement last month after keeping it a secret for a year.

In an interview with OK! Magazine, the actor revealed the news he popped the question in October last year.

Alex told the publication: “I’m a big believer in making that move as soon as you know it’s the right person, and I’ve known Mollie is my person pretty much since the day we met.”

Of their decision to keep the engagement a secret, Mollie said: “We wanted to enjoy that special time together, just the two of us, for a while.”

The couple, who met while attending the same performing arts college, have been together since 2019.

On making the decision to propose, Alex admitted: “I can’t spend my life with anyone else.”

Alex has appeared on the soap since 2008 and viewers have enjoyed watching beloved Simon growing up on screen throughout the years.

The actor took a well deserved break from the role earlier this year while on a romantic getaway to Spain with Mollie.

The Corrie star became a father in 2018 to daughter Lydia-Rose.

The then 17-year-old welcomed his first child with ex-girlfriend Levi Selby, who was 16 at the time.

After recently celebrating his 21st birthday, he looks forward to planning a wedding with his bride-to-be.

The couple have not shied away from showing off their affection for one another publicly, sharing many loved-up snaps on social media and leaving gushing comments for one another such as: “I adore you so much” and “You’re my everything.”

Elsewhere, fans of the ITV soap may be bidding farewell to teens Summer Spellman (played by Harriet Biddy) and Aaron Sandford (James Craven) as their pregnancy lie plot thickened during Sunday’s episode.

Summer’s initially planned to terminate the pregnancy, but decided to secretly keep the baby and sell it to Esther (Vanessa Hehir) and Mike Hargrove (Tom Lorcan) for £10,000.

Over the past few weeks fans have watched the couple’s plan unfold and use the money to pay for Aaron’s dad Eric (Craig Cheetham) in rehab.

But the couple struggled to keep up with their lies in the latest episode, with some viewers predicting a double exit could be on the cards for the characters.