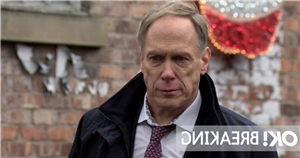 Coronation Street fans were left floored over a graphic "heart-stopping" twist on Thursday night as another "death" appeared to rock the cobbles.

During the latest episode, Teddy Thompkins revealed to a worried Stephen Reid that his son Leo never arrived in Canada.

And furthermore, the texts that Leo had allegedly sent from Canada actually came from Weatherfield as he declared he was going to break the news to Jenny Connor.

Soap fans will recall that Stephen secretly murdered Leo earlier this year in September and has since gone to desperate measures to cover his tracks.

Before Teddy could head over to Jenny, Stephen shoved him onto the road, yelling: "Teddy, I wouldn't if I were you!"

As a suspicious Teddy responded: "You know what happened to Leo, don't you? You've got something to do with this?"

As Teddy went to cross the street to tell Jenny, he was hit by a speeding van as the episode ended with lifeless body unconscious in the road. Will he survive?

Coronation Street's official Twitter has also appeared to hint that Stephen might have had something to do with the van hitting Teddy.

They tweeted after the shocking scenes aired: "Well… That was pretty convenient timing for Stephen #Corrie" with suspicious emojis.

Soap watchers were left floored over the "graphic" and "heart-stopping" twist as they took to Twitter to share their thoughts.

Another follower wrote: "That was a bit graphic. #Corrie #CoronationStreet."

A different viewer said: "#corrie Heck, that made me jump" with a shocked emoji.

While another soap watcher added: "That was like a scene on Final Destination.. the way he got hit."

For all the latest cast updates and juicy Coronation Street spoilers, sign up to our daily OK! Newsletter.

Coronation Street continues on Mondays, Wednesdays and Fridays at 8pm on ITV.