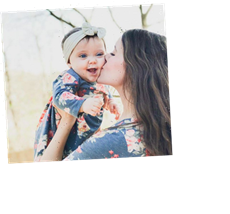 Counting On star Jessa Duggar loves showing off her kids on social media. She shares three children with husband Ben Seewald, and the family has been spending plenty of time together during quarantine. But in a sweet new video, Duggar reveals that she doesn’t always call her daughter by her first name. Duggar was raised as one of 19 children to Michelle and Jim Bob Duggar. The kids were taught not to use birth control (though there is some speculation that they do), and as a result, most couples don’t wait long between announcing pregnancies. In January 2019, Duggar and Seewald announced their third pregnancy in five years.

The couple decided to keep their baby’s gender a secret from their family and the public, and in late spring of last year, they welcomed their first daughter, Ivy Jane. Since then, Ivy has captured the hearts of Duggar fans.

Duggar revealed that she calls Ivy by her middle name

The Seewald family has been enjoying plenty of bonding time since the pandemic started, and Duggar has documented much of it on Instagram. She’s showed the kids playing in the yard, going hiking, and most recently, picking fresh vegetables from the garden. But when Duggar handed Ivy a piece of fruit, she revealed that she doesn’t always call the little girl by her first name.

“Jane, you want to try a tomato, sister?” Duggar said to her daughter, clearly referring to her by her middle name rather than her first name. But Duggar later switched back to calling her “Ivy” by the end of the video. “Taste it, Ivy, it’s yummy,” Duggar later said. When Duggar and Seewald announced Ivy’s name after her birth, fans thought Ivy Jane flowed effortlessly — and apparently, Duggar loves her daughter’s middle name as much as her first name.

Duggar has a close bond with her daughter. She even occasionally dresses Ivy to match her, though she admitted in the past that she was never into “a whole lot of the ‘matching’ thing.” Still, she loves posting Ivy to social media to show fans the little girl’s milestones, such as learning to walk or singing “happy birthday.”

But people have become even more intrigued by how much Ivy and Duggar look alike; she’s a true “mini me” of her mother. Duggar once posted photos of Ivy alongside some of her own baby photos, and the two were nearly identical. “I’d say she looks a little like me,” Duggar wrote. “Especially the eyes.”

I’d say she looks a little like me. Especially the eyes. 👀 What do you think? Swipe left to see more side-by-sides!

Ivy’s big brothers are protective of her

Duggar’s fans love the close sibling bond between Spurgeon, Henry, and Ivy. With Ivy being the youngest of the three, Spurgeon and Henry will do whatever they can to protect her. In Duggar’s video showing the kids fireworks, Ivy’s brothers were worried about her getting too close to the sparklers. And in Duggar’s photos, the boys often have their arm around her or are offering some form of protection over her. Fans are always gushing over the kids’ adorable relationships.