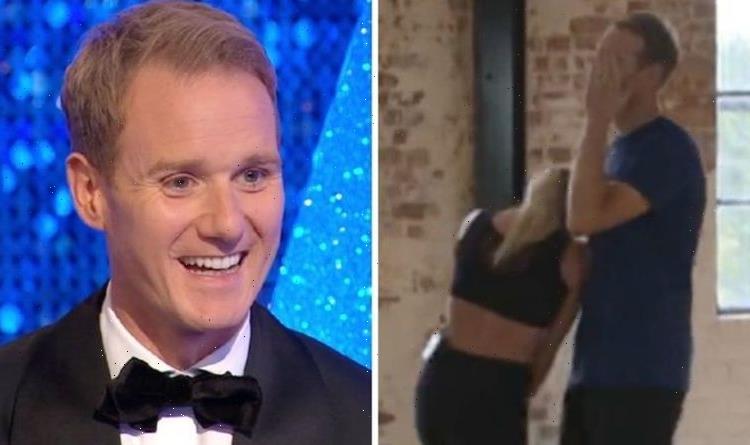 After receiving mixed-reviews from the judges last week, Dan and Nadiya safely made it through to Strictly’s seventh week. As the tension builds in the half-way point of the competition, the BBC ballroom series has released a series of hilarious clips from the rehearsals on Twitter including one of the BBC Breakfast presenter getting to grips with his Couple’s Choice to Classic by MKTO.

The BBC Breakfast presenter let out a frustrated sigh as he tried to copy his partner’s moves in the new footage.

Pro dancer Nadiya shook her hips to the left and right, a manoeuvre which Dan struggled to keep up with.

Dan watched the pro intently as he failed to match up to her rhythm.

Nadiya chastised him: “Not long, it should become short.”

Apparently, Dan had been moving his torso in the wrong direction to pull off the dance move properly.

He let out a tired sigh as Nadiya attempted to show him how to move his hips properly.

She then pushed him around the room as he put his hand in his hand as he chuckled.

“I just think… I just think we might have different bodies,” he joked.

The couple will have to pull off an impressive routine this week if they’re to remain in the competition.

At this point, Dan and Nadiya are just a couple of places away from the bottom of the leaderboard after scoring just 27 points last week.

Other highlights from the video included pro dancer Gorka Marquez explaining how to walk to actress Katie McGlynn.

Katie asks: “It sounds like a daft question, but are you constantly switching your legs? Because you’re ball-changing aren’t you?”

Gorka laughed and explained: “We’re switching all the time, like in every dance, yeah.

“We change from one leg to the other, like when you walk.”

Several fans took to the comments of the new clip after being treated to some of the show’s most amusing backstage moments.

@scdjoanne replied: “I think I’ve lost the plot from laughing!

“So many highlights but Gorka teaching Katie the fundamentals of walking, Nikita saying Tilly looked like his grandmother and Judi snoozing all had me gone hahahaha.”

And Crys said: “I love how they all take the mick out of each other.”

The video also featured some rare footage of Robert Webb and Dianne Buswell before the comedy star bowed out of the competition due to poor health.

Strictly Come Dancing continues Saturday at 7pm on BBC One.