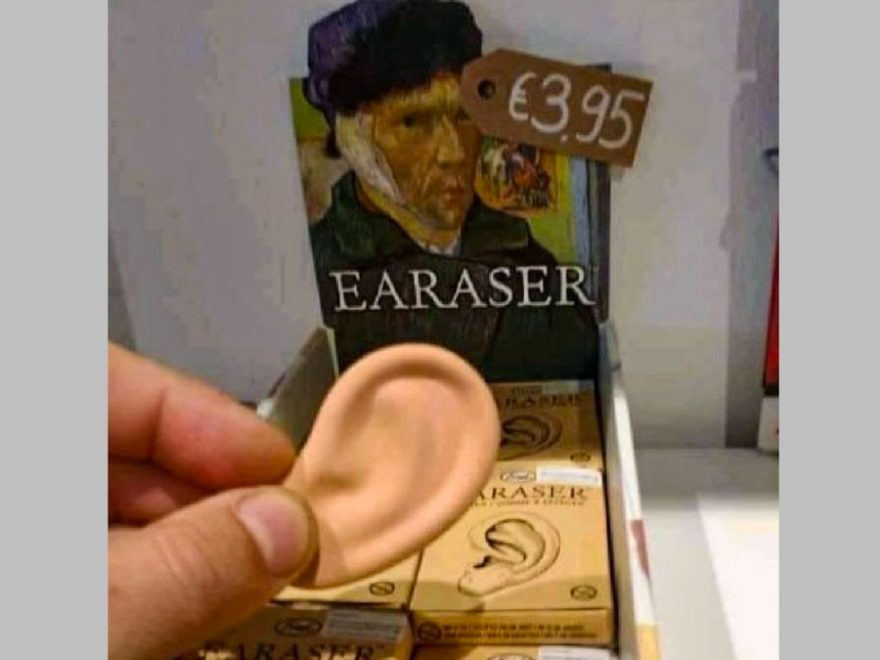 “Imagine having a historic mental breakdown and cutting your ear off then years later it’s sold as an eraser,” tweets @thegallowboob

On Sunday night in Queens, New York, James Reyes, 32, reported to police that he was the victim of a carjacking and a 7-year-old boy with special needs was in the vehicle at the time. Turns out only the first part of that was true. He reportedly lied about the kid so that police would hurry up and find his car. It worked. A massive search effort ensued resulting in the arrest of the car thief, a 17-year-old boy who was released to the custody of his parents. Police charged Reyes with filing a false police report. Hollis resident Joe Minott told WABC-TV: “They blocked off from 100 to 104th avenues, searched all the yards, helicopters flying, looking for this child, then come to find out this morning there was no child. It’s mind-boggling.” It’s not yet clear if that will cover the bill for all that manpower.

2. “My coffee plunger. I owned one nine months before I realised the coffee grounds go UNDER the plunger and not ON TOP of it. I was always so annoyed having to clean the top of the plunger after lowering the coffee into the water. My girlfriend stared at me like I was the stupidest person she’d ever met trying to formulate how to politely fix this.”

3. “How ring binders work. I thought you had to take out all the pages to add a new page to the back of the binder, which annoyed me in school because it could take a while having to realign all the pages to fit the holes in the binder. I was about 22 when I worked in a bookstore and my coworker saw me take all the pages out, after which she showed me how it actually works. I will never forget the look of disbelief on her face.”

4. “When you do something wrong but with enthusiasm, and someone says, ‘A for effort’, I didn’t understand that it meant an ‘A’ as in school report card grades. It never made sense because in my head, ‘E’ is for Effort, like ‘C’ is for Cookie. I finally had someone explain it to me sometime after I turned 30.”

No, it's not our national bird

A reader came across a new type of meat – kiwi mince, made up of wagyu beef, bacon and venison.

1. Mike Crosby writes: “My late father used to say Royal Commissions can be compared to a constipated person. Lots of effort, a loud report and no results.”

2. Brian remembers a radio commentator talking about a bad day in Wellington – “Windy!! It’s so windy out there it could blow the sugar clean out of your tea!”