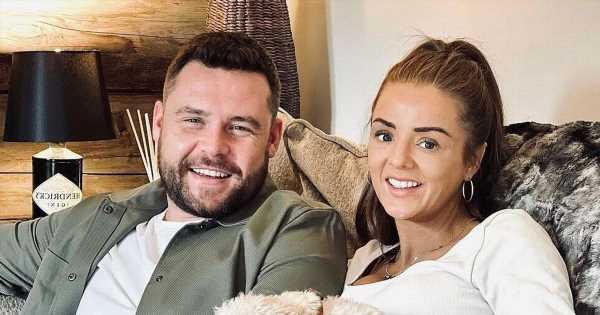 I'm a Celebrity… Get Me Out of Here! contestant Danny Miller left fans scratching their heads by managing to send his partner a surprise present despite being on the show.

The Emmerdale actor is shut away from the outside world in Gwrych Castle with the rest of this year's campers and can barely get his hands on three square meals a day.

But he didn't let that stop him sending his partner Steph Jones a bottle of bubbly and some posh looking chocolates.

Steph, who got engaged to Danny earlier this year, told her Instagram followers that she'd received a romantic parcel from the star at the weekend.

She shared a picture on her Instagram Story showing the bottle of prosecco, which had her name on it, alongside a box of chocs wrapped with yellow ribbon.

"When he plans a surprise parcel," she wrote, along with some sobbing emojis.

Danny, 30, and Steph welcomed a baby boy together just weeks before the actor moved into the castle camp.

And he has admitted he is battling homesickness and missing being away from his family.

He opened up about it to his campmate David Ginola, who he is enjoying a bit of a bromance with, and the football legend told him to think about how "lucky" he is.

"You have a lovely wife, a three-week-old baby boy," he said.

"You need to be strong for them as well. They want to see you strong. When your son is going to watch the programme he's going to say, 'Wow, daddy was strong. He's a strong man. He's my idol'."

Steph has clearly been missing Danny too.

Earlier this week she posted a montage on Instagram showing some of his highlights during his castle stint so far.

"Could not be prouder of you," she wrote, along with a single heart emoji.