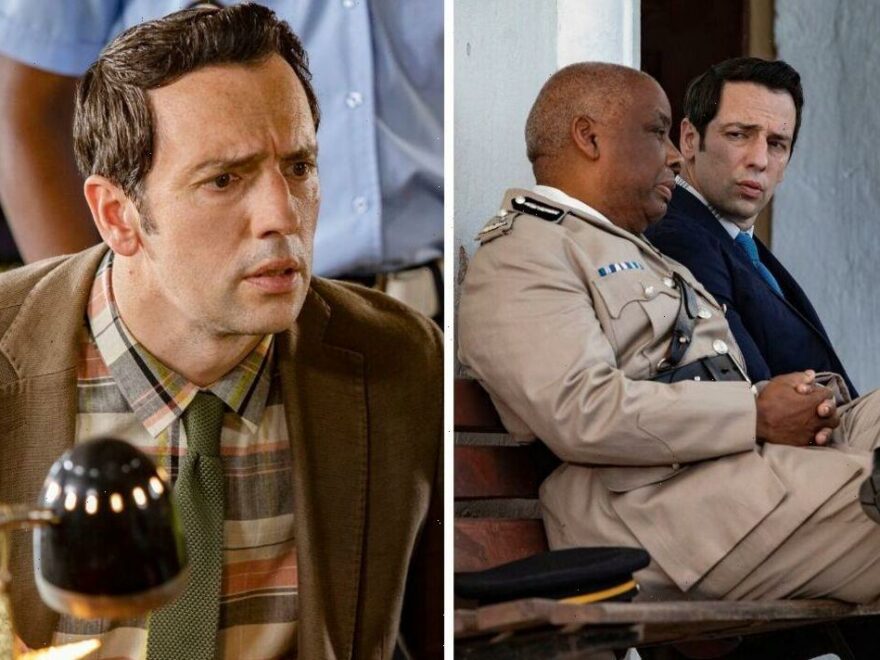 Death in Paradise will make its return on Boxing Day for its BBC Christmas special. Neville Parker (played by Ralf Little) will be back to solve another mysterious murder on the tropical island of Saint Marie. He will also be joined by his team, Marlon Pryce (Tahj Miles), Naomi Thomas (Shantol Jackson) and Commission Selwyn Pattison (Don Warrington).

The Christmas special will also see several guest stars making an appearance including Les Dennis, who will take on the role of medium Danny Sheridan.

Speaking exclusively to Express.co.uk and other press about the festive episode, Les paid a tribute to his co-stars.

He began: “They were all absolutely… Jinny Holder who plays Darlene was lovely.

“Ralf was again welcoming and I know Don Warrington and his partner, Paula.

“I would go to their villa and see them and so Don and I have talked about keeping up but he’s been out there and I’ve been down here in London working on something else.

When chatting about his “biggest scene” with Ralf, Les admitted he was “nervous”.

“My first scene was probably my biggest scene,” the star explained before adding: “On the day, was very nervous about going in and being with all these people who were absolutely, as you say, already regulars.

“It’s hot for one thing, you’re filming in heat and you’re doing the scene, and you think, ‘I’ve got to get this right,’ because I had a lot of the dialogue in it.

“So I was a little nervous, but the cast was so welcoming.

“It wasn’t just that we would film in the day and then they’d all go back to their homes, we all kind of met up in the evenings and socialised,” Les shared.

“So, a lovely, delightful job to do and I only had two weeks there. I think they had the whole summer so I was very envious when I left and came back home.”

Discussing the dynamics of the cast, Ralf also paid a tribute to his co-stars.

“The dynamics of the team are crucial to the show’s success,” the Neville Parker star said.

“The show stands or falls on whether the audience takes them into their hearts.

“Don Warrington is literally a living legend. Every time I’m in a scene with him, I’m thinking about how lucky I am.

“Shantol Jackson was an incredible addition last series. She fitted in easily.

“In the St Barnabas episode, she really took the opportunity. She’s a joy.

“Tahj Miles is annoying because he’s too good. He came in effortlessly.

“When I was his age, I wasn’t cool, and he’s effortlessly cool. He’s brilliant at his job.”

Death in Paradise Christmas special airs on Boxing Day at 9pm on BBC One.