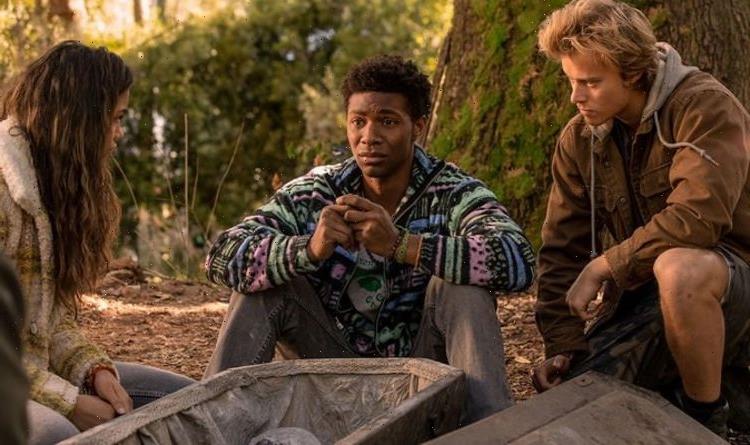 Outer Banks season two is on Netflix now and the action-adventure series made its way into the streaming platform’s top 10. The second instalment shifted the focus away from John B (played by Chase Stokes) for some of the episodes as Denmark Tanny’s legacy was explored. Pope (Jonathan Daviss) found out he was related to the historical figure and he put himself in danger to get justice.

Does Pope die in Outer Banks?

Pope is known for being the most level-headed member of the Pogues and he has high aspirations.

He was respected by his teachers at school but was prepared to risk his education and his future to assist his friends.

John B and the rest of the gang were dedicated to finding the gold Ward Cameron (Charles Esten) had stolen from them.

Season two saw John B and Sarah Cameron (Madelyn Cline) reunite with the rest of the group as they started a new treasure hunt.

Pope ran into a new enemy, Carla Limbrey (Elizabeth Mitchell), who believed he was in possession of a key that could save her life.

The key belonged to Denmark Tanny, a relation of Pope, and it unlocked a golden cross containing a shroud.

She believed if she touched the piece of material, it would cure her of her illness.

Ward was also interested in finding the cross so he could add it to his collection of treasure.

This made Pope even more determined to find the cross before anyone else, so he could protect it from the wrong hands.

Sarah discovered the Island Room, which revealed the location of the cross, had been inside her home all along.

Pope and the gang managed to find a spyglass hidden inside an old tree, which revealed another clue.

The clue explained how the cross was hidden in an old church set up by Denmark Tanny to help slaves.

They arrived at the church and Pope believed the cross had been disguised within one of the church’s roof beams.

He climbed up to test his theory and although he was right, he almost died in the process.

Not only did he fall from the beam and was almost struck by the cross as it came down, but he also suffered an allergic reaction.

There had been a wasps nest in the roof and Pope had been stung a number of times.

All of a sudden his face started swelling and he was unable to breathe, and it was only a matter of time before he would die.

JJ (Rudy Pankow) called on the help of his paramedic friend, who attempted to save him.

Thankfully Pope made a recovery and he survived until the end of the second season.

The gang were able to escape Ward and found themselves on a desert island, celebrating their freedom.

However, Ward managed to keep the gold and the friends must find a way to get it back and reveal the truth about his evil schemes.

Hopefully, the series will be renewed for a third season, during which the Pogues will have another shot at getting justice.

Throughout the second season, Pope explored his relationship with friend Kiara (Maddison Bailey), and they shared a moment of passion.

However, Kiara was only interested in being friends as she did not want to lose the relationship they had already built.

Pope was heartbroken, but there is a chance he may still find love in the next season.