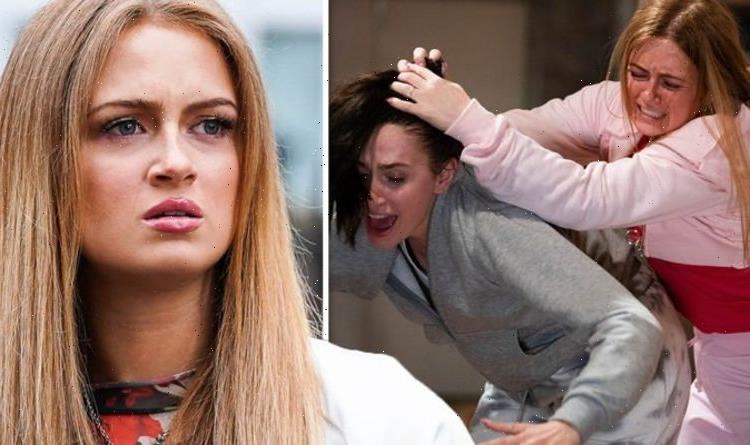 Dotty Cotton (played by Milly Zero) could end up in hospital in EastEnders after getting into a fight with love rival Tiffany Butcher (Maisie Smith). The former best friends have been staying out of each other’s way following the revelation that Dotty slept with Keegan Baker (Zack Morris). However, when the pair are forced to confront their demons, will Dotty end up in hospital?

In upcoming scenes, Tiffany is furious when she spots Dotty wearing her top.

She gives Sonia Fowler (Natalie Cassidy) an ultimatum and orders her to choose between herself and Dotty.

Sonia refuses to be drawn into their feud and encourages her niece to go to a boxercise class with her.

At the class, Tiffany notices a fellow gym-goer Ethan showing an interest in Sonia.

As the pair get ready for the class, Dotty arrives much to her love rival’s annoyance.

Nancy Carter (Maddy Hill) ignores the hostile atmosphere and orders, everyone, to get into pairs.

Tiffany heads straight over to Dotty despite the barmaid’s wariness.

The beauty student catches Dotty off guard and punches her in the stomach.

A fight breaks out between the pair as Nancy and Sonia rush over to stop them.

Will they be able to tear the former friends apart or will Tiffany end up injuring Dotty?

EastEnders actress Maisie confirmed she would be departing the soap earlier this year.

When Maisie’s departure was announced, the actress reportedly expressed to bosses that she didn’t want to be killed off.

Little is known about her exit storyline but her fight with Dotty could result in a stint in prison.

BBC soap spoilers reveal Tiffany will storm out of the gym before Sonia rushes after her.

The pair will reflect on the incident at home but Dotty’s next move has not been confirmed.

Will she report the assault to the police to keep her position in the house safe?

Meanwhile, Sonia tells her niece she has organised a date with Ethan from the gym.

He’s worried about his daughter but keeps his concerns to himself.

Will Sonia find happiness with Ethan or will she be left heartbroken?

Elsewhere, EastEnders fans were not impressed with Dotty and Keegan’s behaviour as one tweeted: “I’m not being funny but Keegan doesn’t deserve Tiffany, I hope she doesn’t forgive him and I hope he and dotty get what’s coming to them #Eastenders.”

“Dotty is such a b***h. She’s not Tiffany’s friend at all. She really doesn’t care about her and only cares about herself. #EastEnders,” a third wrote.

Someone else shared: “Keegan if you really loved Tiffany then you wouldn’t have cheated on her with Dotty #EastEnders.”

EastEnders airs on BBC One on Mondays, Tuesdays, Thursdays and Fridays.