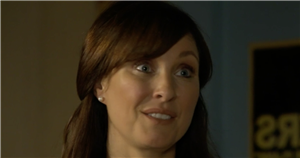 EastEnders fans were left fuming on Tuesday evening, as Suki Panesar dealt her employee Honey Mitchell a brutal slap across the face.

It came after news of Suki attempting to kiss Honey spread outside of the two of them, to Suki's son Kheerat – leaving Suki furious, and Kheerat accusing Honey of blackmail to keep the kiss quiet.

But later, as Suki headed over to Honey's house to have a word with her, things turned even more tense as Honey tried to reassure her.

Honey continued: "But it's out in the open now. You can't keep denying that it happened, and you can't keep punishing me, either, because you won't accept it.

Which is when Suki delivered the brutal blow to Honey's cheek, leaving her reeling.

Turning to social media, a swarm of angry fans posted: "Punch her in the face and sack off the job Honey! She's a mean old witch anyway! #EastEnders."

Someone else echoed: "I heard that slap – Suki really is a b**** poor Honey!"

"I wasn't expecting Suki to ever slap Honey TBH! #EastEnders," another fan posted.

However, another saw Suki's side of things, as they posted: "Suki's got one mean right hook! But honestly, what did Honey think Suki was going to do when she found out that she told Jay?"

"And if you don't, I'll make your life a living hell. Do you understand me?" she threatened Honey before storming out of the house, leaving her former friend – and love interest – crying alone.

Elsewhere in the episode, Dotty attempted to salvage Ruby's club by hosting a noughties night – which was quickly spoiled by the reappearance of her wayward mum, who railed at her for thinking she was better than Sandy.

And Peter was up to his usual wheelings and dealings – threatening to bring legal action over the breakage of his tablet, which was quickly laughed off.