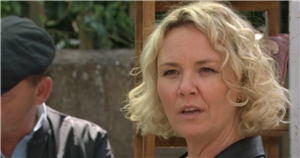 EastEnders' Janine Butcher is doing all she can to secure a job in order to provide for her daughter, Scarlett, but it became clear that she wouldn't be successful at the Minute Mart.

Ever since Honey declined Suki's move, her boss has been harsher than ever, leaving Honey annoyed.

"Go on Honey, chop-chop, off you go," said Janine before turning to Suki, saying: "It can't be easy having an employee with the IQ of an Easter Egg."

Pleading for a job, Janine said: "Be honest, you can't get the staff these days, right?

"But I am going to come to your rescue, I've got history in sales," before Suki rudely interrupted her.

"Your reputation proceeds you," she said with a smirk across her face before adding: "I'm not that desperate for staff and I don't think anyone else around here is either," leaving Janine visibly irritated.

However, Suki made it crystal clear that she will never have Janine on her payroll.

Taking to Twitter, viewers couldn't help but share their excitement following the tense scene, with one writing: "Janine and Suki. Spiteful cows the pair of them (but loving them ngl) #EastEnders [sic]."

While a second added: "OMFG evil Suki is back, I want to see her and Janine together in more scenes!!!!!! #EastEnders"

Before a fourth typed: "Suki giving Janine what for #EastEnders," alongside a string of clapping emojis.

In recent weeks, Janine has been attempting to transform her life after reconnecting with her daughter Scarlett, who had been in the care system.

The former prostitute was left in fits of rage when a court ruled that Scarlett would be going into the care of Kat Slater who had a background in fostering.

Since then, Kat has been allowing Janine access to her daughter while encouraging her to better her life and land a stable and legal job to support her offspring.

EastEnders continues at 7.35pm on Monday on BBC One.