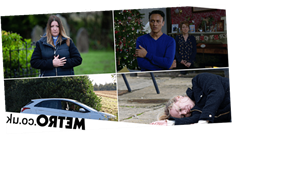 There is tragedy and heartache in an emotional week of Emmerdale as Laurel Thomas (Charlotte Bellamy) and Jai Sharma (Chris Bisson) reach a painful decision over their pregnancy while Rishi (Bhasker Patel) is in huge danger as he crashes his car.

Meanwhile, there’s a health crisis for Dawn Taylor (Olivia Bromley) while Harriet Finch (Katherine Dow Blyton) has the little matter of DI Malone’s corpse coming back to haunt her.

Rishi has accidentally driven off the road. He is slumped against his steering wheel, semi-conscious.

Meena manages to find Rishi’s whereabouts and is quite the hero as she rescues him. But is everything as it seems?

Paul is uneasy as he hides a guilty secret.

Aaron overhears an excited Paddy and Marlon conspiring together and is shocked to discover Paddy is planning on marrying his mum at Christmas.

Meena returns Manpreet’s phone to her, saying it was down the side of the sofa. Manpreet is baffled, unsure of how it ended up there.

Dawn drops unconscious and has a potentially devastating diagnosis.

In the graveyard, Harriet is distracted by a woman standing at the grave where Malone is buried. Harriet’s heart sinks when Jean reveals she is planning on exhuming her father’s body.

Marlon has a good idea for Paddy and Billy is annoyed with Dawn.

At the hospital, Laurel and Jai are told the results of the CVS test and that their baby has Down’s syndrome.

On returning home, they are shocked to discover that, while they were gone, Gabby had found the scan picture. They walk into the house to have the kids greeting them excitedly about getting another brother or sister.

Tracy tries to get Liam and Leyla back together. Elsewhere, the Bishop visits Harriet to discuss the matter. Harriet panics, worrying this might lead to Malone’s body being discovered sooner rather than later. Harriet tells Will and he’s panicked too – something has to be done.

Laurel speaks to Rhona about the test results. Rhona is left upset and angry that Laurel has put her in this situation and Laurel is left devastated.

Harriet feels the weight of the world on her shoulders and Tracy ropes Nate into having a word with Liam.

Laurel and Jai struggle to make their decision. There are many factors Jai and Laurel discuss and consider, but soon the couple are united in a silent sadness. Both are quietly devastated by their decision to terminate the pregnancy.

Meanwhile, across the village, Marlon and Rhona talk fondly about their son Leo and what joy he has brought to their lives.