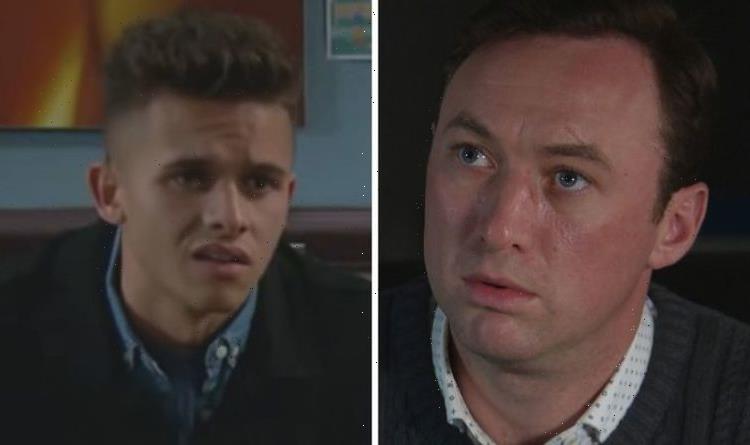 Emmerdale viewers have watched in anticipation this week as it looks like evil nurse Meena Jutla (played by Paige Sandhu) could be caught out. At the end of Wednesday’s ITV instalment, the villain was forced to think on her feet as she moved her sister Manpreet Sharma (Rebecca Sarker) from Wendy Posner’s (Susan Cookson) house.

Meena, who had kept her sister hostage at Wendy’s home, was seen putting the GP in a body bag before placing her in the back of the car.

The clues are adding up and Meena is slowly letting her mask slip after Manpreet’s estranged husband Rishi (Bhasker Patel) reported the doctor missing.

The police then got involved and thought it would be a good idea to search Manpreet’s room.

Despite not finding any clues, things are far from over for the nurse.

She instantly believed Noah Dingle (Jack Downham) had stolen it after he was the only other person who had been in her room.

After she threatened the youngster, Noah was forced to get the ring back from his love interest Chloe (Jessie Elland).

He then passed it to Samson Dingle (Sam Hall) to look after while he thought of a plan.

However, little did he know Meena was watching the entire incident unfold.

Later on, Meena broke into the Dingles’ house and stole the ring back.

While she was there she spotted Vinny’s (Bradley Johnson) clue board, which he had put together to prove Liv’s (Isobel Steele) innocence.

The evil nurse couldn’t help but mess with the board, and in doing so, she stole a photo of one of her victim’s Ben Tucker (Simon Lennon).

Vinny has also grown suspicious of Meena as he explained to Liv: “Meena’s name keeps on cropping up.”

It is only a matter of time before the youngster figures it out completely, but will it be too late?

As the episode came to a close, Meena could be seen digging a hole at what looked like Liam Cavanagh’s (Jonny McPherson) allotment.

However, the idea was put into Meena’s head after she spoke with Jacob Gallagher (Joe-Warren Plant).

In the shop, Jacob let slip that Liam had become very invested with his allotment.

“He’s all about the allotment these days,” Jacob said before Meena replied: “I wouldn’t have thought it is allotment season.”

“It’s not,” Jacob continued. “But he’s got all the books and he’s drawing up a planting schedule.”

Before the nurse left, Jacob explained the only patch of earth Liam hadn’t dug up was by the bird box he had planted in memory of his daughter Leanna.

Sinister Meena could be seen talking to herself as she dug a hole at the allotment.

“There, you should be safe here,” Meena began. “Leanna can watch over you.

“It doesn’t mean I am finished, not by a long shot. If anything I am just getting started.”

With Meena planting evidence at Liam’s allotment, it is only a matter of time before it gets discovered.

Jacob put the idea in Meena’s head, so could he end up accidentally framing Liam for the murders when police dig up the box?

Emmerdale airs on Friday at 7pm on ITV.