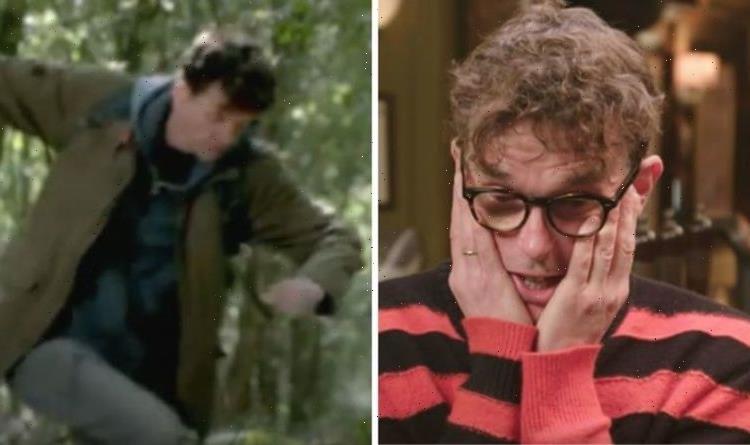 Mark Charnock has played Marlon Dingle in Emmerdale since 1996, and during that time he has had many ups and downs in the ITV soap. When Marlon was introduced to the programme, he instantly became best friends with Paddy Kirk (played by Dominic Brunt) and the duo have been pals ever since.

He may have had a turbulent love life, but Marlon has remained a firm favourite with fans throughout his time on the show.

During Tuesday night’s Soapy Slip-Up’s, the cast of Emmerdale recalled some of their fondest memories while filming.

Fans also got an insight into what really goes on behind the scenes.

The TV show even showed some of the cast’s funniest blunders on set.

However, despite showing clips of the cast members messing up their lines, the programme also showed some of their injuries.

Mark recalled the time he broke his toe after he fell the night before he was due to film.

To make matters worse, the actor ended up tripping again when filming a scene with Dominic.

He went on to admit that he staggered around on set with a broken toe as he had suffered a fall the night before.

Mark began: “The night before, Dominic… we knew we were filming quite near where I live so he came over for a glass of wine.

“As he was leaving, I sort of ran around the coffee table to show him out and broke my toe.”

As the programme showed a clip of the Marlon actor trying to shoot a scene, he could be heard saying: “I want to carry on but it is very painful.”

“My toe it was like a foot,” he added as Mark admitted: “I’d had too much wine.”

Mark went on to discuss his close friendship with his onscreen pal Paddy.

He explained he had even come up with a musical, called Paddy.

“Paddy the Musical was just messing about really many, many years ago,” Mark said.

“I like to sing songs to Dominic and he has put up with it, I wouldn’t say he has enjoyed it.”

“He has put up with me now doing it every day for a quarter of a century,” he added.

“Unfortunately for Dominic, he didn’t get cast as Paddy in the musical.”

“Ray Winstone got the part of Paddy,” Mark joked. “And Nicholas Lyndhurst was Marlon.”

“He’s got this whole ending,” Dominic chipped in. “And he’s talking about the lighting.”

“It’s ridiculous, it’s all a waste of time,” he added.

Soapy Slip-Ups is available to stream on ITV Hub now.