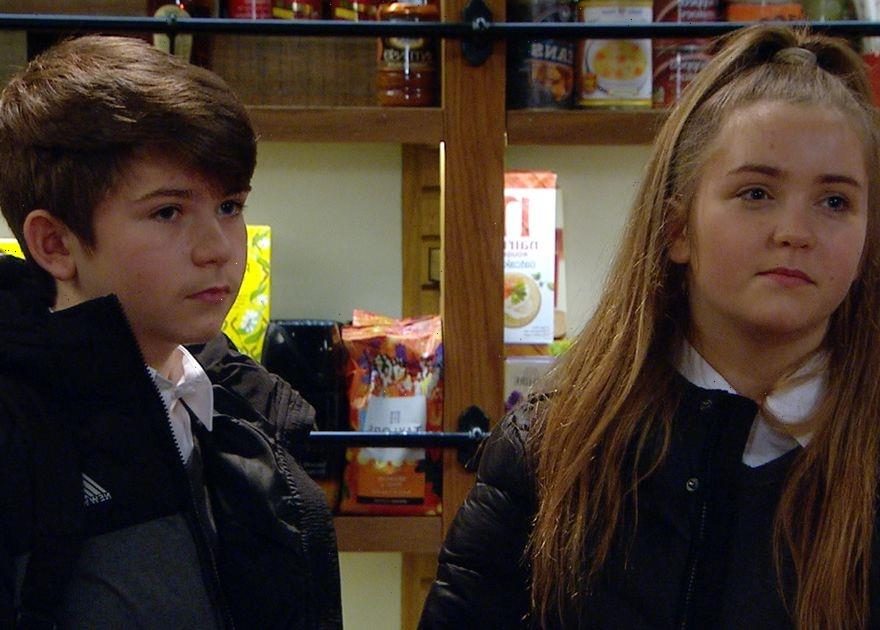 Emmerdale's child stars Gabrielle and Sebastian Dowling have played the roles of Cathy and Heath Hope in the Dales for an incredible 14 years.

At only a few weeks old, the non-identical twins first appeared on screens in 2007 playing the children of Viv and Bob Hope.

Remarkably, the dynamic pair have continued to portray the roles over the years and the characters are now 14-years-old.

Since their time on the ITV drama, the twins have been involved in several hard-hitting storylines. Including the death of their mother Viv who was tragically killed in a fire that broke out in the post office.

The Hope twins, who are currently part of a bullying storyline alongside April Windsor, were also caught in the roaring blaze and were admitted to hospital soon after.

Other dramatic storylines include been born in a shed on the moors and having nine godparents when they were christened.

Not only this but the siblings have had to endure their father's scandalous affairs and various step-mothers.

But due to the fact that they were only a few weeks old when they first appeared in soapland, actors Gabrielle and Sebastian have never known a life away from TV.

The pair first got involved in acting when their parents heard that Emmerdale were looking for new-born twins to star in the soap. At the time, the sibling's mum Louise Dowling was pregnant and considered giving it a go.

Louise was fairly familiar with the entertainment industry as she previously worked as a professionally dancer and an extra.

In February 2007, Louise told the Huddersfield Examiner: "You don't get opportunities like this every day and it will be something for them to look back on when they are older.

"I was a bit dubious at first because I wasn't sure what my husband would think about it. But Emmerdale has been fantastic."

The twins were not on a contract to begin with so mum Louise was unsure on whether they would remain on the soap or how long they would be needed for. But Louise decided to stay committed as long as it didn't interfere with their home life balance.

Initially, Emmerdale execs had hoped to feature the twins from birth, however, due to Sebastian needing to stay in hospital for an extra week, the crew used a stand-in actor temporarily.

But once they were both on set, family and friends were excited to see the little tots on TV.

In order to ensure things ran smoothly, Emmerdale staff worked very carefully with Gabrielle and Sebastian and allowed them to only be on set for short periods of time.

The child stars were very tame and well behaved while shooting, which meant programme makers had to do something in order to make them cry on cue.

Mum Louise said: "They sometimes want them to cry, which can be difficult because they don't really cry much unless they're hungry."

The mum explained that in order to make the twins cry the filming crew would give them a bottle but then immediately take it away from them, but she was fine with them doing this.

But due to the coronavirus pandemic, viewers haven't had the chance to see much of the younger characters on set as they temporarily stopped filming.

The young stars were kept away from the studio due to strict social distancing rules and the limitations on the amount of people allowed in at one time.

Not only this but the younger cast members would often need to be accompanied by a chaperone which meant there would be too many people on set.

As a result, viewers were surprised when they finally saw the twins back on set resuming their roles and couldn't believe how different they looked.

Airing their thoughts on Twitter, viewers discussed how grown up the twins looked.

One viewer penned: "I honestly had no clue that they were Bob's twins in the cafe. They've grown up so fast!!"

Another said: "Those twins are so grown up. Kathy especially," added another, while a third agreed: "So Bob’s kids have appeared practically grown up!"

But although the twins were missed by many, their characters returned with an attitude problem, which resulted in them bullying Brenda's partner Eric Pollard.

Not only this but the twin's friend and family member April Windsor has been battling with ongoing online bullying which she's only mentioned to the twins.

But the pair encouraged April to keep quiet and not say anything to her dad Marlon Dingle, despite her worries.

Could the twins be involved in the bullying?