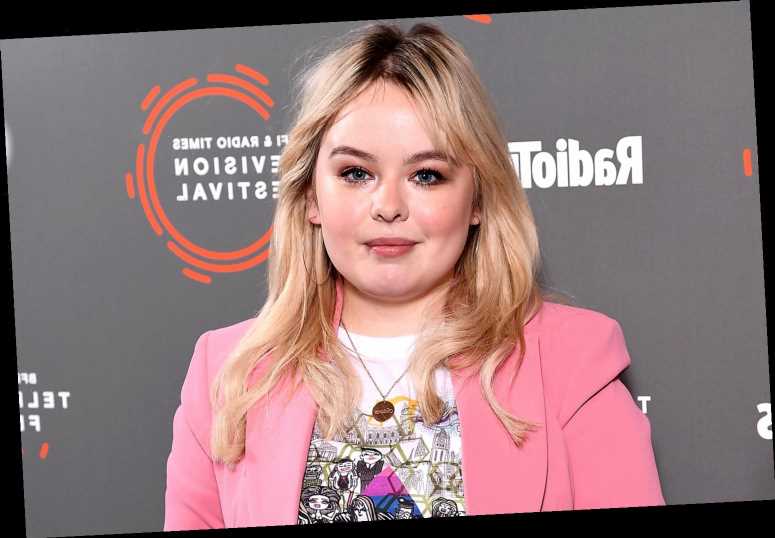 Nicola Coughlan, the 33-year-old Bridgerton breakout star, has made quite a splash about the ton as the sweet and unassuming Penelope Featherington. Learn more about the Irish actress below!

Here’s where you’ve seen her before:

Bridgerton isn't Coughlan's first time lacing up a corset for a role. The actress played Hannah Dalton in Harlots – which ended after three seasons, but you can go binge on Hulu. Coughlan currently plays the fast-talking, anxiety-riddled Clare Devlin in Derry Girls, which is currently awaiting production of its fourth season. You can watch the first three on Netflix. She has joked, "I'm definitely a Galway girl. I sometimes lie and tell people that Ed Sheeran wrote the song ["Galway Girl"] about me and sometimes they believe me and then it gets really awkward."

So that Derry Girls accent didn’t come naturally — but it did come hilariously.

The actress said on the Graham Norton Show she had to learn the Derry accent by watching old clips of Girls Aloud star Nadine Coyle auditioning for Pop Stars — and does a spot-on recreation of Coyle's big scandal on the season.

Coughlan is a trained actress! She studied at The Oxford School of Drama and Birmingham School of Acting. On top of her theatre education, the Bridgerton star studied English and Classical Civilization at the National University of Ireland in her hometown of Galway.

Yes, she knows that she looks young.

As evidenced by her steady stream of teenage roles, Coughlan, who turns 34 on Jan. 9, knows she doesn't exactly look her age. She told The Guardian that while she doesn't know for sure the key to her youthful looks, she suspects she can chalk them up to two things: genetics and prosecco. "My mum looks really young for her age," she said, adding, "Maybe, drink a lot of water? And then, I'm like, wine is alcohol, and alcohol's a preservative, and I love prosecco, sooo … maybe that's it?!"

She isn’t a natural redhead.

While her character on the hit Netflix show has curly red hair, Coughlan is a blonde. She shared on Twitter, "I didn't realise people thought this was my real hair, to the extent that a driver on set once saw me without it 4 months into filming and asked me if it was my first day on the job."

The decidedly-not-her-hair wig also has an A-list legacy: Coughlan revealed on Twitter that her wig block was formerly used for an Oscar-winning Aussie! "The wig block I used was the one used for Margot Robbie in Mary Queen of Scots and I found it weirdly satisfying that Margot and I have the same size head," Coughlan quipped on Twitter.

If you haven’t figured it out, she’s a must-follow on social media.

She’s should be crowned the Queen of Behind-the-Scenes Photos.

Coughlan not only shares amazing transformation videos from her hair and makeup trailer, but also adorable shots of her Bridgerton, Harlots and Derry Girls castmates when the cameras aren't rolling.

Like this one of her "play fighting" in Catholic school uniforms with Derry Girls' Dylan John Llewellyn.

Or this sweet selfie for all of the Penelope Featherington and Colin Bridgerton – AKA Polin – shippers out there.

Or this giggle-fest with onscreen BFF Claudia Jesse, who Coughlan loves "so much IRL I can't even tell you."

Or this black-and-white snap of her with her fellow Harlots.

The rising star told Elle of her first encounter with show-runner Shonda Rhimes, "I really held her hands like Oprah does to people. I had never done that to anyone in my life. There was a voice in my head that kept saying, Let go of Shonda Rhimes. This is weird. But she couldn't have been more gracious and lovely."

Honestly, we would probably react the same way.

She’s an outspoken activist and ally. Coughlan has always been outspoken. The actress told The Guardian that, in 2015, she went door-to-door in an effort to get people to vote "Yes" on Ireland's equal-marriage referendum. She is also an advocate for women's reproductive rights, marching in a protest calling for change to Northern Ireland's laws in 2018.

Her Instagram – which we already know is great – is also full of resources and information for her followers on everything from the Black Lives Matter movement to HIV infographics.

She once called out critics for focusing on her body and not her looks.

In an essay written for The Guardian entitled 'Critics, Judge Me for My Work in Derry Girls and on the Stage, Not on My Body,' Coughlan called out a critic who, on two separate occasions, called her "fat" in a review rather than focusing on her performance.

She wrote at the time, "I know I'm not alone; women in my industry are put under constant scrutiny for their looks. It affects male actors as well – I had messages from them – but the vast majority of feedback was from women. Something in our society tells us that women's bodies are fair game for scrutiny in a way that men's simply are not."

Additionally, when the Daily Mirror wrote that her 2019 BAFTAs look was "not the most flattering," Coughlan not only clapped back at the publication, she also auctioned off the dress to charity.

But she doesn’t consider herself to be a ‘body positivity activist.’

Coughlan told Refinery29 that, though people often insinuate that she is a body positive activist, she is not. Instead, she prefers to focus on using her body for her acting.

"I know people mean it in the nicest way possible, but I always say to them, 'I am not a body positivity activist,'" she Refinery29. "'There are so many incredible people who are, and I admire them and think they're wonderful, but that's not my focus. I'm an actor. That's the bottom line for me.' If I was playing a ballerina or an Olympic gymnast, I may have to lose a bunch of weight. If I'm playing a sumo wrestler, I may have to gain a load of weight. If it's relevant in the script, then it's relevant to me."

One look at her Twitter or Instagram and you'll see that Coughlan loves a good reality TV moment.

She recently appeared on the U.K. gameshow Taskmaster:

And tried her best at the Great British Baking Show with her Derry Girls costars in December 2019.

Even if she had a tiny meltdown and wrapped herself in a blanket like this: Or RuPaul's Drag Race, which she loved so much, she attended the finale of the UK series in November 2019.

As if we weren't jealous enough of her style and talent, Coughlan is also besties with none other than Queer Eye's Jonathan Van Ness. The actress was Van Ness's date to the Elton John's Oscar Party in 2020 and he even visited her on set of Bridgerton. "Category is: Bring your cutie pie love dove friend to work day," Coughlan wrote of the visit.

"I love you so, so much, from the moment I met you I felt like I'd known you my whole life and I'm so blessed to call you my friend ❤️❤️❤️❤️❤️❤️," Coughlan wrote on Instagram in March 2020 in honor of Van Ness' birthday.

Coughlan even got to brag that she knew about Van Ness' secret wedding from over the summer.

We're not sure what's next for Coughlan, but whatever it is, we're sure Lady Whistledown will keep us posted.