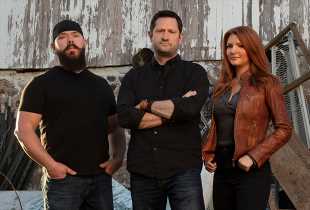 A&E Network ain’t afraid of no ghosts: The cable net on Wednesday ordered five paranormal unscripted series, including a revival of Ghost Hunters.

Ghost Hunters, which originally ran on Syfy from 2004 to 2016, will once again follow team leader Grant Wilson as he and a new crew of professional ghost hunters investigate hauntings across the country. With the help of “forensic experts, historical records and the most innovative technology available,” the logline reads, “the new squad will help everyday people who are struggling with unexplained supernatural phenomena” and “give relief to those plagued by paranormal activity.” (Watch a teaser for the new installments above.)

The 20-episode revival kicks off on Wednesday, Aug. 21 at 9/8c, followed by new episodes of Psychic Kids at 10 pm. Psychic Kids, which first aired from 2008 to 2010, will follow up with the show’s original subjects, who are now successful adults working to empower a new generation of young psychics alongside trained licensed therapists.

Also ordered at A&E Network, to premiere this fall: Trey the Texas Medium, which focuses on custom casket maker (and, yes, medium) Trey Ganem; Celebrity Ghost Stories, in which psychic-medium Kim Russo will bring “some of the biggest names in entertainment back to the sites of their paranormal experiences” to address the ghosts of their pasts; and World’s Biggest Ghost Hunt, a two-hour special that will gather five paranormal investigators at the legendary Pennhurst Asylum in Pennsylvania for what is described as “the longest continuously filmed paranormal investigation in television history.”

“A&E has been on the forefront of programming in the paranormal space and with that success, we have been eager to bring the genre back to the network for some time,” said Elaine Frontain Bryant, A&E Network’s executive vice president and head of programming. “Each of these series has a unique point of view, but will collectively give our audience a window into a world of spellbinding stories that have to be seen to be believed.”