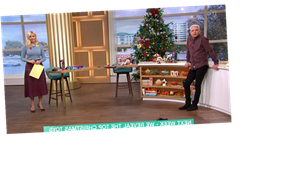 The presenting duo opened Wednesday 28th October’s show by playing with some remote control carls as they revealed they would be doing a Christmas segment later in the show.

As Phillip, 58, and Holly, 39, welcomed fans to the programme, some beady-eyed followers spotted a Christmas tree set up in the background.

Some appreciated the decor and found it got them in the mood.

One wrote: “I’m not normally one to agree with putting up Christmas decorations in October, but after this total disaster of a year – it’s totally justified.”

While another celebrated: “Yay #thismorning have their Christmas Christmas tree up!!”

However, some fans were less than impressed with the sight of the tree.

As one asked: “#ThisMorning why this obsession with Christmas? I am in a part of the country that has not been able to hug their family since August.”

And a second wrote: “I mean, I’m all for the Christmas shnizzle & enjoying the build up… but @thismorning can we please just enjoy Halloween & sparklers first”.

While a third raged: “The f**king Christmas tree is up. #ThisMorning”.

And another said: “Good moaning – oh, oh Jesus, no! Is that a Christmas tree I see on set?!”

While a fourth said: “as if they already have a Christmas tree up on the this morning set” followed by a crying face emoji.

Holly and Phillip, who recently revealed he hasn’t discussed divorce with wife Stephanie, have been getting into the festive spirit recently.

The pair announced they would be taking part in a This Morning pantomime.

Holly, who recently divided fans as she wore Christmas pyjamas, announced the news on the show as she said: “2020 hasn't been the year we all hoped it would be. Amongst the many things that have been cancelled it looks like there won’t be many pantomimes this Christmas.”

And Phillip added: “Well, we couldn’t let that happen so today we can reveal, can I have a drum roll please? That this Christmas we are throwing a This Morning pantomime.”

While Holly said: “On Friday 11th December we'll be opening the curtains and bringing you some Christmas cheer as me, Phil and our entire This Morning family put on our fancy dress for our very own Christmas pantomime.”