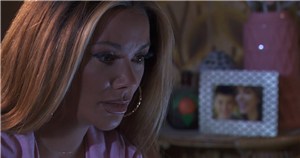 The child killer is currently away from the village with his mum Mercedes McQueen (Jennifer Metcalfe) as she tries to cover up the fact he murdered his grandad Silas Blissett (Jeff Rawle).

They are set to return to the village imminently and Goldie is determined to find out the truth about her brother Sylver McQueen's (David Tag) death.

Fans of the Channel 4 soap are aware that Bobby left his step-father Sylver to perish to death following an explosion in the village earlier this year.

During Tuesday's (November 8) first-look episode on E4, Goldie’s mind was all over the place as she faces Mercedes' impending return.

As she dug through Sylver’s cloud, she made a shocking discovery of the video of Sylver revealing that Bobby knew where he was in the explosion.

As Goldie watched the clip in horror, fans rushed to their keyboards to share their predictions.

While a fourth social media user said: "Watch out Goldie."

It comes after Hollyoaks dropped their winter trailer teasing what viewers can expect over the festive period.

The dramatic advert shows Goldie threaten to throw out Mercedes and Bobby out of the house.

In other scenes, Bobby can be seeing colouring in a picture of Goldie as an angle but he sends her a chilling warning which may make her regret her threats.

Fans will have to wait and see if Bobby adds to his kill count.

Hollyoaks airs every weeknight at 6.30pm on Channel 4 followed by a first-look episode on E4 at 7pm