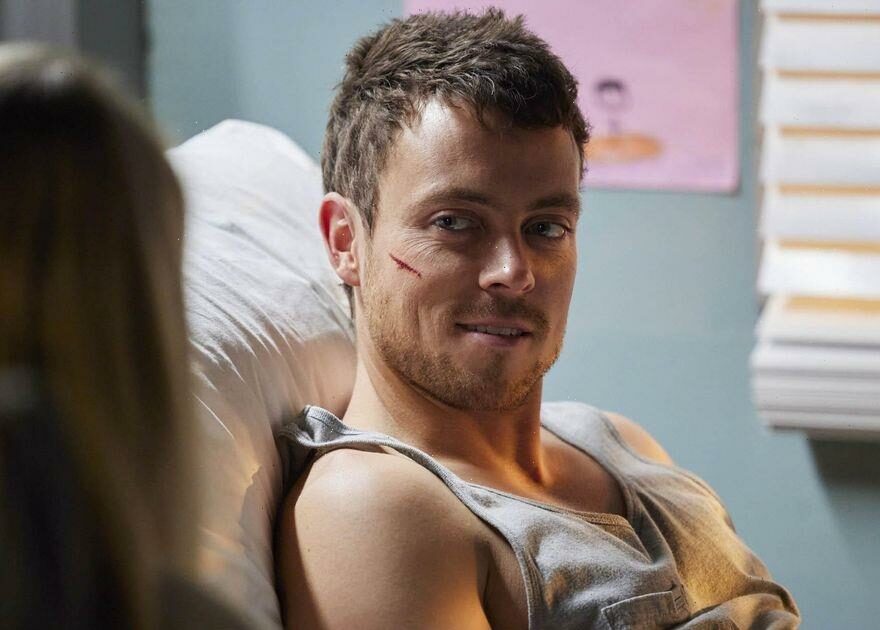 Dean Thompson is dealing with the news that his girlfriend Ziggy Astoni is pregnant in Home and Away this week.

Ziggy has decided to keep the baby, meaning she and Dean are set for a whole new journey in the Australian soap.

It's not the only big storyline Dean has had this year though, as he went on the search for his mum Karen in the spring.

He felt guilty for not having contacted her following his horrific accident, but Ziggy reassured him that his mum would be fine.

While Dean Thompson's on-screen life has been very dramatic since he arrived in Home And Away in 2018, off-screen, actor Patrick O'Connor's life has been far less dramatic – but just as interesting.

Although Dean Thompson is Patrick O' Connor's most well-known role, the actor landed his first break out role in the 2017 coming-of-age film Girl Falling.

However, he is fondly known by Home And Away viewers as bad boy Dean Thompson, after the character was introduced as Willow Harris' ex-boyfriend.

Since 2018, the character has been involved in huge storylines such as his relationship with Ziggy Astoni, and his criminal past with Colby Thorne.

Dean was also involved in a huge car crash in the soap in 2021, with Patrick detailing his character's development and struggles in an interview with TV week, saying: "Last time [he was injured], it was Willow looking after him as a friend, so he was okay with showing her how weak he was.

"But Ziggy is a different story. He wants to be the man she needs – and currently, in the state he finds himself, he's not."

Patrick has since become a fan favourite on the show and has also been nominated for the Digital Spy Reader's Award for Best Soap Newcomer, but narrowly missed out to Owen Warner from Hollyoaks.

One of Home and Away's current on-screen romances involves Dean Thompson and Ziggy Astoni – but many viewers may not know that the stars who play them are a couple in real life too.

Dean star Patrick O' Connor has been dating Ziggy actress Sophie Dillman for a number of years, after their romance blossomed on the set of the popular Australian soap.

However, the couple were already friends after meeting eight years ago at an acting school in Queensland.

Speaking about how their relationship, Sophie Dillman told TV Week: "We were work buddies first, and it's helped us work well together now, so we're lucky in that regard.

"We are best mates and treat each other like that, but it's also made our relationship stronger starting out that way."

Patrick added that despite the attention that the couple get when they are out and about with one another, it doesn't affect their relationship, adding: "We get spotted by fans if we go out as a couple, but it [fame as a couple] hasn't changed too much."

Although it has not been confirmed how long that Patrick and Sophie have been a couple for, things have already gotten serious between the two, with the duo moving into a new home together in Sydney.

During Sydney's 14 day lockdown in 2021, Patrick even paid tribute to girlfriend Sophie on social media, sharing pictures of a beautiful birthday lunch that he made for her.

The photographs on Patrick's Instagram story showed him pouring glasses of win and serving a luxurious food menu, wearing a candy stripe blazer and straw hat.

He also shared sweet snaps of the couple together riding horses, with the caption: "'Happy birthday to my number one. So proud of you and couldn't imagine doing this crazy life without you, thank you for everything."

Things have certainly been heating up between Dean and Ziggy on-screen, but Patrick O' Connor has since revealed that their steamy scenes have led to 'embarrassing' on set moments.

The actor revealed that the scenes are filmed in very hot weather, which means they are often left 'disgustingly sweaty', with Patrick saying to Daily Telegraph: "It's an awkward situation. When we were shooting, when you're in that heat.

Sophie Dillman also revealed to WHO magazine that she calls out any fellow co-stars who have bad breath during scenes too, adding: "You have to call them out if they've got bad breath!'

"I mean, kissing anyone with 60 people standing around staring at you is always going to be weird."