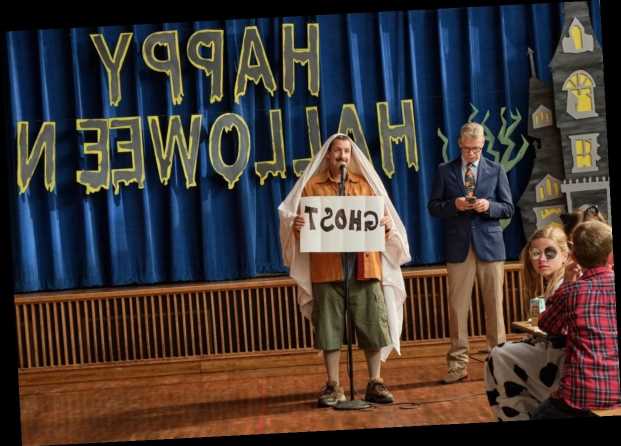 Hubie Halloween may feature Adam Sandler’s most good natured character since Mr. Deeds. It also plays as a sort of Greatest Hits album from Sandler’s most popular movies. While it never reaches the heights of Happy Gilmore or The Waterboy, it is nice to see Sandler play the hits.

Adam Sandler is everyone in ‘Hubie Halloween’

Hubie Dubois (Sandler) is a grown-up manchild in Salem, Mass. He still lives with his mother (June Squibb) and talks in a childlike wisp, even a French name like The Waterboy. He loves Halloween and is nice and thoughtful to everyone.

The residents of Salem mock Hubie mercilessly. They throw things at him while he rides his bike. Some call him Pubie. Mafioso Mr. Landolfa (Ray Liotta) physically assaults him. It is a comically heightened situation, but these are grown men attacking grown men.

Hubie is afraid to stand up for himself so he just takes the abuse. When people start disappearing on Halloween night, Hubie is on the case and might just get a chance to redeem himself in Salem’s eyes.

So, you’ve got the bullied manchild learning to stand up for himself like The Waterboy. You’ve got the manchild talking gibberish like Billy Madison. A lot of regulars from Sandler’s movies show up, including Julie Bowen, Kevin James, Tim Meadows, Maya Rudolph, Steve Bucemi and Rob Schneider.

It’s not quite the rom-com Sandler like his movies with Drew Barrymore. It’s more of a silly, obligatory romance, but even more tangential than it is in his other vehicles. Since Hubie Halloween is a mystery, a lot of big names show up in small roles for a few scenes, including some others you haven’t seen in a Sandler movie in a while. The O’Doyle family even returns! This is now their third appearance since Billy Madison.

There are some real monsters involved in the Halloween tale, which suggests supernatural references like the underrated Little Nicky. There’s a bit more outrageous physical comedy in Hubie Halloween. Some stuntmen do Hubie’s bike stunts. The jokes may be silly, but the cast commits to it.

The sincere, if basic, messages of ‘Hubie Halloween’

Hubie Halloween is sweet with good messages about being nice, liking the nice person and standing up to bullies. Even though there’s no real character motivation, it’s worthwhile to put this message into the world, especially after Sandler has done many movies celebrating mocking and nastiness.

Every character in Hubie Halloween is just a types, so it’s all broad strokes. The broad strokes say be nice and reward kindness. That includes the romantic subplot. It’s a nice thought that you could connect just on the basis of mutual kindness, even if it’s not realistic.

Hubie is endearing with the teenagers who sympathize with him. It’s not quite as sympatico a match as Sandler with the third graders in Billy Madison, but he’s 25 years older. The kids he relates to are only 10 years older.

Hubie Halloween probably won’t be the movie college students quote late at night in their dorm rooms, or even that kids grow up with imitating Sandler’s voice. We’ll see if it even trends again next Halloween, but for this year, it’s a fun trip down Sandler’s movie memory lane.