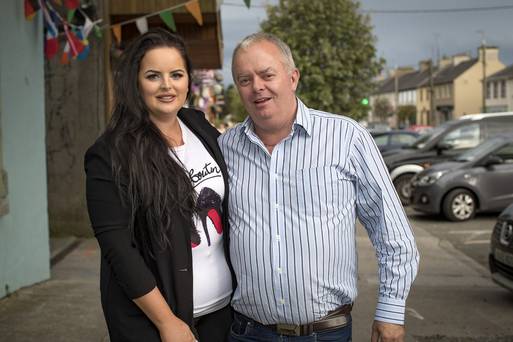 As the curtains came down on Love Island last night, Maura Higgins’ unforgettable time in the villa came to an end.

No one will forget her entrance, strutting her way straight into the hearts of the country.

But this is just the beginning of things to come for the Longford model, according to younger sister Becki.

“She seems so comfortable behind the screen,” the 26-year-old told Independent.ie.

“I can’t see her coming back here – I’d say it will be London or somewhere else in England.

“There is so much lined up for her but I would love to see her on ‘I’m a Celebrity, Get Me Out of Here’, if I could pick for her. She would be terrified, but class on it – she’d be effing and blinding out of her.”

The family didn’t know Maura would be walking into the villa – and making quite an impression when she did – until the night before she burst onto TV screens. Becki said it had been a “shock” at first.

“Ballymahon is such a small place and nothing much good comes from it – and then this happened. We were definitely in shock.

“I didn’t know till the night before, it was all hush-hush. It was very weird at the start I was watching going, ‘Oh my God, that is my sister!’ But now it’s a bit more normal.”

Maura was famed for letting the odd profanity slip out of her mouth and her confidence seemed to ooze into the nation’s sitting room every evening.

READ MORE: Ian O’Doherty: ‘Does Maura represent a backlash against All the Young Prudes?’

But Becki said that Maura might have been feeling very different on the inside.

“She has quietened down since she got with Curtis, but at the start I’d say she was scared herself. And of course, all the girls were laughing and looking down at her and she probably felt awful, but she got the best out of it anyway.”

Meanwhile, when it comes to Maura’s choice of man, Becki is looking forward to meeting professional dancer Curtis.

“I like him if Maura likes him, but I won’t judge till I meet him myself. I only see an hour of him every evening so I don’t know if that is who he is. You have to meet someone to know,” she said.

As for the sudden media attention, Becki said it had been tough to look at some of the nastier comments made about her sister.

“At the start it was a bit much, there was a lot of hate coming up. There was love for her but there was stupid stuff – pure jealousy really. People were saying things about her accent. But now I just ignore it all,” she said. She thinks Maura would have steeled herself ahead of the show to prepare for any backlash.

“I think she knew herself before she went in that things were going to be negative and some things would be positive. She knows that comes with that line of work. I think she will come out and not expect people to be so in love with her as they are,” she said.

Maura had to miss her sister Louise’s wedding last Friday – but ultimately the family think that things have worked out well for their Love Island star.

“We would have loved to have her there, but Louise gave her blessing and we were almost happier for her that she was in Love Island.”

Her dad Seamus certainly couldn’t be prouder of her.

“She is brash, but she is sensitive too,” he added.

READ MORE: Love Island 2019 finale – where to watch, who will win, and everything you need to know