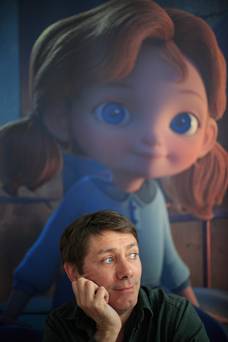 ‘I made a somewhat 17-year-old-type decision that it was better to have no Leaving Cert than a bad Leaving Cert,” says Emmy Award-nominated animation writer/director Damien O’Connor.

At the time, maybe 30 years ago, Damien was in Newpark, “which I really liked”, he says. “I did well in English and in art. But then I got a report that said I was so atrocious at everything else, that if I kept up like that, it would bode very badly for the Leaving Cert… That’s when I decided to leave. I went to England for a weekend, and stayed for three months.”

What did his parents think of his decision? “They weren’t very happy,” he says with a half-smile.

Back home, it was a neighbour, who lectured in NCAD, who asked Damien “are you good at anything?” to which Damien said, ‘I can draw’. “I had always drawn as a kid,” he says now. “And I always wanted to direct. There was always a huge ambition there to know where do they put the camera, why do they put it there?”

The neighbour looked at his work and said “OK, you can draw. Let’s get you a portfolio together…” With this help, Damien applied to Dun Laoghaire College to do animation, and got called for interview. “When I got there, the guy who interviewed me said, ‘Would you go back and do your Leaving Cert?'” I said ‘no way’. He said, ‘you know what, I’m leaving here in a week. I think you should go to college and that it’s ridiculous that you can’t because of the Leaving Cert, so you’re in…’ He wrote my name down, and that’s how I got into college.”

Which sounds like the end of that story, except that it wasn’t. Throughout his time in college, the issue of the Leaving Cert, or rather lack thereof, cropped up regularly. “I was being told, ‘you can’t be here’, but I just kept going in. On the basis that ‘if I ignore this entire situation, it’ll improve…’ It didn’t improve,” he laughs, “but I continued to ignore it. I just kept going back, because I was learning. My plan was to keep learning and gain as much as I could, while I could.”

In the end, he earned a Diploma in Advanced Communications Specialising In Animation, and an object lesson in persistence. “That,” he says, “was a brilliant foundation for any career in media! Because if I accepted every ‘no you can’t do this’, I wouldn’t be doing what I’m doing now.”

The year Damien graduated, 1996, was also the year many American animation studios pulled out of Ireland, “because the tax breaks had been taken away. I could not get a job for love nor money. My chronic insecurity meant that I wasn’t even knocking on doors – that would have been terrifying! – so instead, I wrote a script, and sent it into the Irish Film Board, and got a grant.”

He made a short animated film, Mutt, “and it did OK. Studios saw it, and liked it, and I thought ‘now the doors will open’. But they didn’t.” A year or so later, he wrote a second script, again got funding, and made Ledog. “Again, nothing happened. The film did well, but no offers.”

By this time, Damien was working in the e-learning industry, doing screen graphics, “and living in various bedsits”. He applied to the Film Board for a third film – Dick Terrapin, based around the tragic comic story of his own terrapin: “He grew so big, that eventually my mother had to give him to the zoo.”

Fast-forward many years and Damien and then-girlfriend Susie, “who is now my wife”, were on a first date. “We went to the zoo, and I told her about Dick, and we went into the terrapin room, and there was Dick, on a rock! That night Susie was in a taxi with me and my brother, Brian, and she said ‘oh, we went to the zoo today and saw Dick Terrapin…’ And Brian started laughing, then the taxi driver worked it out and he started laughing so hard he had to pull over…”

Maybe you’re laughing too, by now? Eventually, Damien got it. “It turned out Dick never went to the zoo. He went to the vet…”

For all that, Dick Terrapin, again, did well, it didn’t deliver what Damien wanted. “Lots of nice responses, no jobs. Out of frustration at not being in the industry, I decided, ‘I’m going to go and make a documentary about the worst place on Earth’.”

At the time, based on lowest life expectancy, highest infant mortality and other grim vital statistics, this was Angola, in West Africa. He took redundancy from the e-learning job, and travelled there with a camera crew. “By fluke timing, we arrived just as the war ended, so I was the first journalist into many areas. We got to places with Goal and Concern that had had no aid presence in 10 years. Honestly, I didn’t really know what to do. I wasn’t actually a journalist. We filmed what we found, there was no hard narrative.”

And, what did they find?

“It actually was the worst place on earth,” he says quietly. “We found feeding centres, death, no hospitals, malnourished children, all grimness. There were some awful stories…”

Did he regret going there? “I regret the motivations for going there,” he says. “I think if you’re there and it makes a difference, if there is an actual purpose, it would make it an easier pill to swallow. If you just go over, and you are a witness to this, and nothing advances, then why are you there?”

He came home with many hours of footage, and decided, “OK, I’ll learn editing to edit this down. I got to a rough 45-minute assembly, then thought ‘what is this thing? What is it for?’ I shelved it. I decided, ‘there’s not enough there to justify showing this to people’.”

At the time, he says now, “you don’t realise that these failures are beneficial”. And, he adds, “there was more weight on that particular failure because I do believe the people you’re interviewing and talking to, there is a responsibility to them.”

Learning editing “opened doors”, he says, specifying, “all the wrong doors! I ended up filming horse racing, initially as a freelance cameraman, then I worked my way up to a job directing. I was just married, we had no kids yet, but kids were on the brink.”

In fact, this, he says, was his rock bottom, “in terms of narrative, I was at my low point. I was utterly miserable. The job I had was paying bills, but I didn’t like it. The thing I learned in college, 2D animation, was obsolete because it was all computer-generated animation by then. The Angola documentary I had pinned all my hopes on was going nowhere. I thought, ‘it’s over’.”

However, around that time, he saw a job advertised in Brown Bag films, for a junior assistant editor, “which is basically way down the line,” he says, “but I thought, ‘I know editing, I know animation’, so I applied”.

He got called in for an interview “and the guy interviewing remembered my first film, Mutt, and had really liked it. I thought ‘finally that film has got me in the door!'” He got the job – “junior assistant editor on Noddy. I was 36 years old and I had left college when I was 19 or 20.”

The same month he got that job, his first child was born, a son. “Kids changed everything,” he says, “for the better. That quote about the pram in the hall being the enemy of promise? I found the opposite. I finally went, ‘OK, I need to get serious, it’s not just me now…'”

And then Noddy came to an end and, as is the way in the industry, so did Damien’s job. And so, he “did what I do, I wrote another script, was lucky enough to get funding from the Film Board again, and made After You”. This time, the plan did work. He learned CG animation to make After You, and it led to a job on Doc McStuffins, again with Brown Bag. “I worked on Doc for seven years straight. It was brilliant.”

A chance phone call from Debbie Deegan, founder of To Russia With Love, led to the gorgeous short film Anya, and then, in 2015, Ellen McCourt, widow of writer Frank, came to Brown Bag with a short story Frank had written about his mother, Angela’s Christmas.

“I immediately responded to the material,” says Damien. “There was a really good script written by Will Collins, so I started working with him on it, and it all came together. Netflix acquired it and showed it, and the response was fantastic, better than we could have hoped for.”