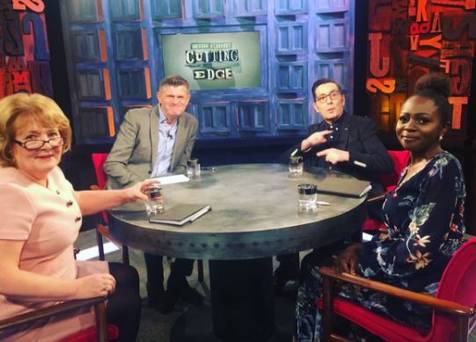 Journalist Mairead Lavery has been praised by Cutting Edge viewers for sharing the heartbreaking story of the death of her father, which happened when she was just 12 years old.

Mairead appeared on the panel of the RTE chat show alongside Aslan’s Christy Dignam and Deborah Somorin and spoke about attending counselling in recent years to deal with the trauma of that loss.

Her father had died suddenly while attending a cattle mart leaving her mother alone to run the farm with Mairead and her younger siblings.

“He died suddenly – he was there one minute, he was gone the next,” she revealed.  “He as buried two days later.  I didn’t even go to his funeral.  Children weren’t really let go to funerals back in those days.  He was rarely spoken about after he died.

“I was stone mad about my father,” she continued.  “I was the eldest of six.  The younger members of the family would hardly remember him at all but for me the memory was so clear and so strong and it was gone and there was never a goodbye.  There was nothing.  He was just gone.”

Mairead revealed that on the day her father died, she was told the devastating news by a teacher at school and when she arrived home she was “immediately sent to the local town to get bread and ham and biscuits and cake and drink and everything for the wake.”

Mairead spoke about the isolation she felt after her father’s death and recalled sobbing while completing an entrance exam for secondary school the week after the funeral but there was nobody she could talk to as her siblings were so much younger and her mother so busy running the farm and another business alone.

“I was 12 and I totally lost my childhood, that carefree time. Now it was a totally different time, taking over responsibility for a house and younger siblings because my mum had to be away so much,” she said.

“Nowadays you have Rainbows [for] children if they’ve lost somebody thats’ close to them.  They have counselling.  They have support.  There was nothing back in my day.”

Mairead revealed that she sought counselling a few years ago to help her deal with her grief.

“I just wanted to process what the loss of my father meant to me mentally, meant to me in terms of the way I looked at life, how I trusted people, how I delegated, everything like that, because it had a huge impact.”

While Mairead’s story resonated with many viewers, both Christy and Deborah were also praised for their ‘honesty’ and ‘compassion’ in sharing their own personal stories.

Fellow panelist Deborah shared her experience of a “very traumatic upbringing” and being pregnant at the age of 14 and living in care throughout and following her pregnancy.

“What kids in care do is, first of all, you carry a lot of feeling of ‘no one can ever love me’ and ‘there’s something wrong with me and that’s why this happened to me’,” she said.

“So Tusla will very much encourage you to go to therapy when you’re in care so that you find a way to understand what happened and understand it wasn’t your fault and that you can move on from it and that was your past and it doesn’t have to be your future.”

Deborah spoke about the therapist who helped her at the age of 14 and how she was an “incredible human being” who equipped her with the CBT (Cognitive Behavioural Therapy) skills to deal with difficult times in her life.

Christy spoke about the depression he felt on emerging from hospital after a year of treatment for cancer and how he had been completely unprepared for the emotional impact of his illness.

“I got into a really, really dark place and I finally got out of that kind of depression and it occurred to me that when I was in hospital they deal with the medical end of things but they don’t even tell you that you’re going to go through this,” he said.

“I was back out of hospital, but I have got cancer and you’ve to live with that cancer and the head s*** that that’s going to evoke in you.  It was just never touched on. It’s like post traumatic stress almost.”

Christy revealed that he got through it with a combination of western and elements of eastern medicine.

You can watch the full episode of Brendan O’Connor’s Cutting Edge on the RTE Player.