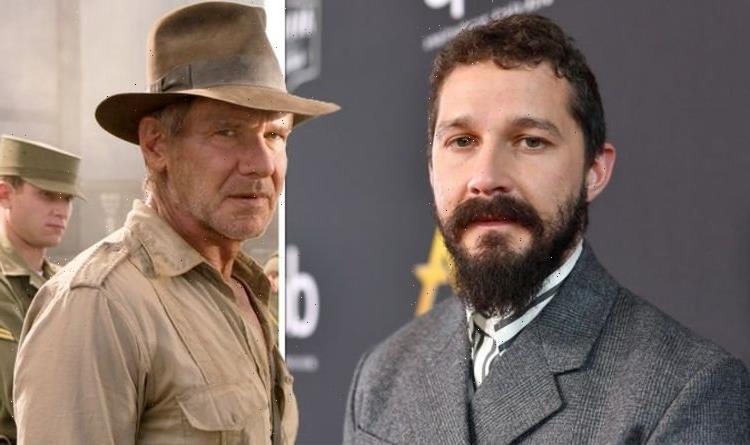 The plot of Indiana Jones 5 has been shrouded in mystery since it was announced last year. Harrison Ford has been spotted filming in Glasgow over the past few months in a plethora of 1960s-styled clothes, giving fans their first taste in what the film might look like. It looked like shooting was going to stop when the 79-year-old star broke his arm earlier this year, but the latest video from Scotland shows off what could be a pivotal moment in the movie.

The video below shows Ford’s body double following a parade in Glasgow, styled to look like New York City.

The archaeologist can be seen chasing the parade on horseback – but he isn’t alone.

Before long, a motorbike follows him into the event.

The motorbike looks to be manned by a young man with dark hair and a leather jacket.

Of course, the only person in the Indiana Jones franchise who has these attributes is none other than Mutt (Shia LaBeouf).

Mutt was one of the main characters in the fourth Indy movie, Indiana Jones and the Temple of the Crystal Skull.

The young greaser was revealed to be Indiana’s long-lost son during the events of the film.

His mother, Marion Ravenwood (Karen Allen) explained that she fell pregnant after being with Indy and never got around to telling him.

What do you think? Should Indiana Jones have Mutt return to the franchise? Join the debate in the comments section here

The final moments of Crystal Skull hinted that Mutt would be taking over.

In the last scenes of the film, Indy and Marion got married.

As Indy walked away with his new wife, Mutt picked up the hero’s iconic hat and went to put it on, signifying the next step of his journey.

However, at the last moment, Indy snatched it back.

Harrison Ford is Haunted by the 'Indiana Jones' Theme Song

Indiana Jones 5 has been confirmed to be the final outing for Ford as the iconic hero, so someone will most likely take over from him going forward.

With that said, Star Wars actor Phoebe Waller-Bridge has also signed on to the film, and was recently spotted on set for the movie.

On top of writing for enormous franchises such as James Bond, Waller-Bridge has made quite the name for herself as an actor.

Could she have been cast as the daughter of Indiana?

Indiana had a daughter in the 1990s TV show – The Young Indiana Jones Chronicles.

If Waller-Bridge and LaBeouf are playing the children of Indiana Jones, they could well take over as the archaeologists for the franchise.

Until the film comes out, fans will simply have to wait and see.