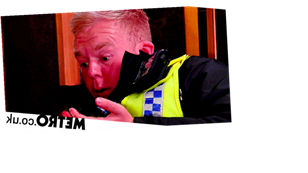 It’s chaos on the cobbles tonight, as Craig Tinker (Colson Smith) is shot and left to die.

Corrie viewers know that Scott (Tom Roberts) has been plotting to scam Ray (Mark Frost) and his mates.

The villainous Scott has tried to lure Johnny Connor (Richard Hawley) into the dangerous plan under the threat of him telling the truth to Jenny (Sally Ann Matthews) about his criminal past.

But as the scene gets underway in tonight’s episode, Johnny can’t go through with it and suffers an MS seizure, leaving Scott to don a Halloween mask and set his evil plan into motion.

Things go disastrously wrong, and Craig rushes in and ends up getting shot.

Does Craig die in Coronation Street?

Tonight viewers will see Scott start a chain of events he won’t be able to take back.

As Ray organises entertainment for some investors in the Bistro and asks Faye to act as hostess, a masked Scott bursts into the Bistro and, pointing his gun at Faye, orders everyone to do as he says.

Copper Craig hears the commotion and rushes into the Bistro to help Faye.

As Scott grabs Ray’s cash and tries to flee, Craig springs into action, attacking Scott with a chair.

In a disastrous swirl of action, the gun goes off, leaving Craig slumped and left to die.

Will someone be able to help in time? Viewers have to stay tuned to find out…

There has been no mention of Colson Smith leaving the soap.

The actor has wowed fans with a dramatic weight loss over the last few months, so here’s hoping his character sticks around on screen to keep us up to date with his journey.

Coronation Street continues tonight at 7:30pm and 8:30pm on ITV.