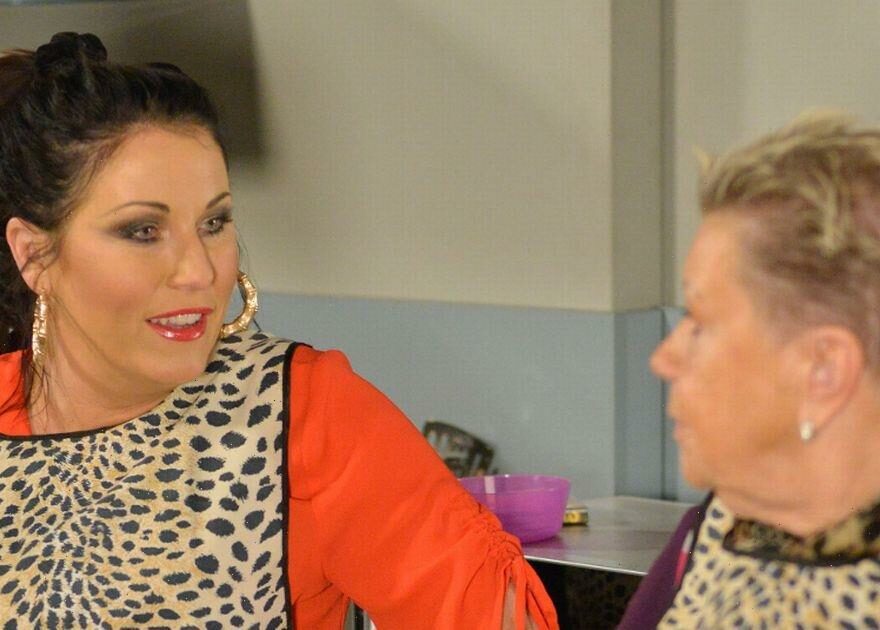 Jessie Wallace looks completely different from her EastEnders role of Kat Slater in a snap where she posed with her beloved co-star Laila Morse.

Looking worlds away from her role as the leopard-print loving lady in the beloved BBC One soap opera, Jessie looked incredible as she got her glad rags on for Halloween.

Taking to Instagram on Tuesday (October 23), Jessie could be seen posing with Laila who portrays her nan Mo Harris (Big Mo) in the soap.

Jessie could be seen with a very pale face base, grey contouring, dark eyeshadow, thin brows and a deep berry lip.

She donned an elaborate grey and black wig and what looked like a white satin puff-sleeved garment.

Laila – Jessie's on-screen nan – on the other hand wore a grey bowler hat and intriguing smirk.

It looked as though the duo were sat on the sofa in the Slater's house on Albert Square, which might mean they snapped a quick selfie while filming a scene for the soap ahead of Halloween.

Writing in the caption, Jessie penned: "Frankenstein's bride and Winston," before adding: "Love my Mo."

Fans went wild in the comments section, with many gushing over the much-loved duo.

One person penned: "Wish Mo would return to Walford on a more regular basis; we love her comedy!!"

"This photo just made my entire Tuesday," swooned another.

"Oh god. This is so funny love you ladies," added a third.

A fourth then said: "You both look brilliant."

While a fifth added: "Love you girls."

Jessie has played Kat Slater on the BBC soap opera since 2000, with Laila having played Mo Harris for the same length of time.

Both actresses have taken short breaks from their roles throughout their time on the show, but are currently both part of the EastEnders cast at the moment.