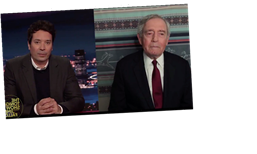 Jimmy Fallon condemned the acts of violence in Washington D.C. on Wednesday when Trump supporters stormed the Capitol.

“Today was not patriotism, today was terrorism,” the Tonight Show host said during his somber opening.

Fallon referred to the attacks on the U.S. Capitol Building by MAGA fanatics that interrupted the Electoral College Certification process. The siege, which began early Wednesday afternoon, saw government officials quickly evacuated from the Senate Chambers and resulted in a total of four deaths.

The late-night host noted that the grim events of the day, which came upon the success of Georgia democrats Raphael Warnock and Jon Ossoff, make it difficult to put out an entertainment show, or any show. However, he said it’s these “times where we need each other most.

He continued to talk about how he and his family members view the United States, noting that Wednesday’s events rendered the country not only unrecognizable, but appalling. “If my grandfather were alive today and saw the country he fought for today, he’d be disgusted.”

In addition to invoking the thoughts and feelings of his veteran grandfather, Fallon referred to President-elect Joe Biden’s address to the country upon the moments of unrest. During his speech, the former Vice President urged Americans to show empathy and understand that the riots at the Capitol do not represent the United states.

“He said we have to step up. We’ve seen it over and over again during this pandemic, from the frontline workers to cashiers at grocery stores…we are best when we work together when we step up,” Fallon said during his opening.

While the footage of Trump supporters storming the U.S. Capitol, taking trophies from their siege and threatening democratic processes may shock viewers, the act itself shouldn’t have come as a surprise, Fallon said.

“Today was a disgrace, today was disappointing but sadly today was not a surprise,” he said, before sharing an important message. “It’s important to remember this is not who we ware. I assure you there are more good people than there are bad. Good will prevail.

Veteran journalist Dan Rather joined Fallon on Wednesday night to summarize the events that left Americans shaken. The notable media personality, like Fallon, called the Capitol violence something other than a protest.

“I think this could be described as a case of domestic violence…the overall scene was one of a coup attempt,” Rather said. “It has failed.”

According to Rather, “all hell broke loose” and there was no semblance of law and order. Instead “you had mob violence inside the Capitol of the United States,” he added.

“We have never seen this in our country before, an effort to overthrow the legitimate vote of the people in a presidential election. this was in any dictionary definition a coup attempt,” Rather said.

Also joining Fallon as a guest on Wednesday night was Black Monday star Don Cheadle, who talked the work the nation still needs to do, even under the new Biden administration, and what America truly is.

Biden may have said that the acts of violence and danger in the Capitol may not be the true essence of America, but Cheadle disagreed.

“This idea that this isn’t us…let’s be real this is America,” he said.

The actor explained that moments of violence and injustice have been a constant throughout American history. He noted that America tends to be in a perpetual “dance we have to in in this country when we have been unable to deal with what we’ve dealt with historically, with injustice and all the things we’re seeing coming to play now.”

“I don’t think it’s something we, you, me and all of us citizens in this country are just going to be able to wipe our hands and go, ‘Ok we did that.’” I think we’re going to have to put our nose to the grindstone even further,” he said. “We really gotta get down in the weeds to make any substantive change.”

See the Tonight Show clip with Dan Rather, Don Cheadle below and Fallon’s opening above.