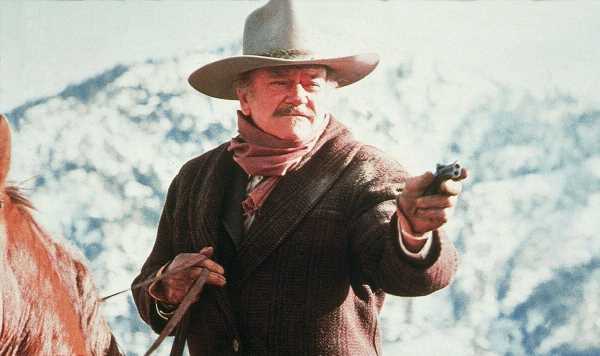 The Shootist: Trailer for 1976 Western film

Back in 1964, John Wayne had a cancerous lung and a few ribs removed, leaving him stricken with health problems for the rest of his life. Duke would struggle tenaciously through physical scenes in his movies, secretly relying on an oxygen mask that he was desperate to hide from the public, so as not to taint his strong cinematic image. Pushing on to make a string of movies over the next decade, including his Oscar win for True Grit, the Western legend’s final film, The Shootist, hit cinemas in 1976, just three years before he died.

It’s commonly believed that Wayne was living with the stomach cancer that killed him in 1979, when playing a cowboy living with the disease in The Shootist. However, this was not the case, as Duke had been cancer-free since 1969. According to Scott Ryman’s John Wayne: The Life and Legend, the star did have cancer again in 1975, but had gone into remission before filming began on his last movie. Nevertheless, the actor’s other health issues were plaguing him, which almost lost him the role.

Wayne had been ill for much of 1974, having had a severe bout of viral pneumonia after filming True Grit sequel Rooster Cogburn, with Katharine Hepburn. It caused Duke to cough so violently that he damaged a heart valve causing more problems when he did eventually film The Shootist, which is on ITV4 today.

At first, his poor health and stamina on Rooster Cogburn meant he wasn’t initially considered for what would be his final film. The likes of Charles Bronson, Clint Eastwood, George C Scott, Paul Newman and Gene Hackman were offered the role but passed on it.

The Shootist’s producers thought Wayne was too old at 69 to be believable as the gunfighter. However, producer Dino De Laurentiis insisted on his casting even though the character JB Books was only 50 in the novel the movie was based on. Filming with co-stars Lauren Bacall, James Stewart and Ron Howard took place at Carson City. With a 4600ft altitude, Duke’s single lung capacity was compromised all the while struggling with mobility.

In the end, The Shootist’s production was shut down as Wayne was hospitalised for two weeks with influenza. The star had also been suffering from an enlarged prostate while filming, which wouldn’t be operated on until late 1976. At one point, it was actually uncertain if the movie would be completed since Duke was so ill his doctors were on the verge of forbidding him from finishing his work on the production.

Considering his significant health problems on the film, it’s unlikely he would have successfully managed to be insured for the project had the full extent of them been known. Of course, in the end, Wayne did complete filming, but his stomach cancer returned and he made his final public appearance at the Oscars on April 9, 1979. It was here that he used a secret trick to hide how noticeably thin he’d become.

It was later discovered that Wayne had worn a wet suit under his tuxedo to broaden himself out that night. The Western star was welcomed by a standing ovation as he announced The Deer Hunter as Best Picture. He died just two months later on June 11, 1979 at the age of 72 with his family around him. His daughter Aissa held his hand and asked if he knew who she was and he replied with his last words.

Duke said sweetly: “Of course, I know who you are. You’re my girl. I love you.” Shortly before he died, the 72-year-old converted to Roman Catholicism and asked that his tombstone read, “Feo, Fuerte y Formal”, a Spanish epitaph meaning “ugly, strong and dignified.”